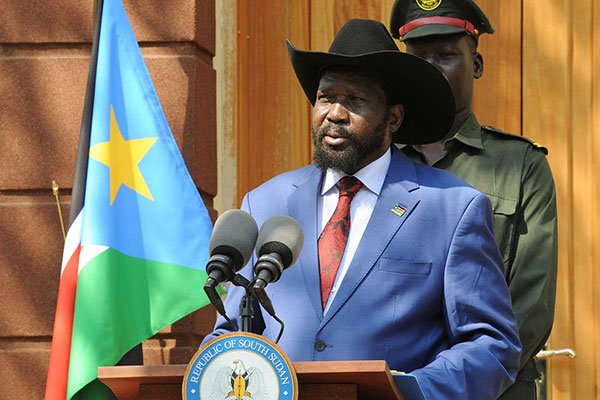 South Sudan’s warring parties have reached a tentative agreement to revert to ten states, paving the way for the creation of a transitional government of national unity.

In an overnight about-turn, President Salva Kiir stood down from his stance on 32 states, saying he was compromising for the sake of the country’s peace.

A document released by the Presidency in Juba on Saturday indicated Kiir, his First Vice President Taban Deng Gai and Vice President James Wani Igga, who represented the incumbent government, agreed to go back to the original ten states South Sudan had at independence. They also added three administrative regions which they argued could be addressed during the transitional government expected to be formed with opposition leaders Riek Machar.

These regions include Abyei, whose border demarcation with Sudan is still a matter of discussion. They also included Ruweng and Greater Pibor Areas, usually seen as oil-rich.

However, James Oryema, who represents the SPLM-IO in Kenya, said there was no justification to add the two, saying all parties were comfortable with Abyei because of the issue with Sudan.

“We accept the agreement to go back to 10 states and we welcome it. But the small problem is why they added two special areas. They weren’t an issue in our negotiations. They need not be special because they are within the original states,” he said on phone.

President Kiir, who had gathered the governors of 32 states in Juba on Thursday and insisted there will be no reduction, instead said he was compromising and that those who would be affected will be helped during the transition.

“We recognised that this decision may not have been the best option for our people but for the sake of peace and unity in the country, the Presidency sees it as necessary,” Kiir said.

“This decision was reached by the presidency after weighing several options and we thought this compromise will preserve the unity of the country and move the people of South Sudan out of this imposed senseless conflict which has affected the livelihood for many of our citizens.”

The issue of the number of states had become a threat to the creation of the government of national unity whose deadline is February 22. Regional bloc Intergovernmental Authority on Development (Igad), which has midwifed the peace deal, had warned that there would be no further extensions as it was not “desirable”. Igad gave Kiir up to Saturday, February 15, to present a compromise proposal.

At the meetings in Juba, the sessions were largely conducted in Arabic and key donors known as Troika: UK, US and Norway were not represented. But it is thought that pressure from partners contributed to the compromise.

A meeting between President Kiir’s officials and 32 State governors in Juba on Thursday had recommended that South Sudan maintains the current number states, as well as an additional special region of Abyei.

But the outcome of the consultative meeting, where all 32 regional chiefs met with by Information Minister Michael Makuei Lueth and voted for status quo, had meant further possibility that the opposition group would drift apart from Kiir’s position.

Edmund Yakani, the executive director of Community Empowerment for Progress Organization, praised Kiir for the compromise, saying will be a relief to the people of South Sudan.

When South Sudan gained Independence from Sudan in 2011, it had 10 states. In 2015, during peace talks in Ethiopia, the SPLM-IO proposed 21 federal states, based on the old districts created by the British colonial administration. The government strongly opposed this move.

And in August 2015, the parties signed the Agreement on the Resolution of the Conflict in South Sudan (A-ARCSS), which acknowledged the initial 10 states.

However, in a surprise move in October 2015, President Salva Kiir issued a decree creating 28 states, saying it was a popular demand by the people.

He said it was meant to devolve power rather than centralise governance in Juba, a move that was condemned as unconstitutional by political parties, civil society organisations and members of the international community.

Gradually, the states have increased to the current 32.