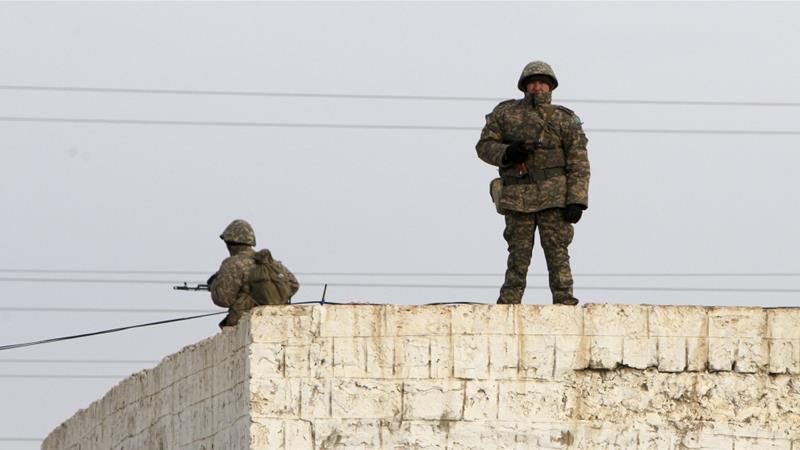 A brawl and a series of clashes in several villages in Kazakhstan’s southern Zhambyl province have left eight people dead, officials said.

Interior Minister Yerlan Turgumbayev said on Saturday several dozen people were injured in the clashes on Friday in the Jambyl region, about three hours drive from Kazakhstan’s largest city Almaty and close to the border with Kyrgyzstan.

The crowd clashed with police, wounding two officers with gunshots, and torched dozens of buildings and cars. Police have detained 47 people and confiscated two shotguns.

Police and the National Guard now have the situation under control, President Kassym-Jomart Tokayev said in a statement, ordering the government to take steps to maintain calm in the villages.

Tokayev said the fighting occurred in a number of settlements in the Kordai district of Jambyl region.

Footage posted to social media late on Friday night showed scenes of young men, some armed with clubs, marching along a village road with buildings ablaze either side.

Kazakhstan’s authorities have not commented on the origins of the fight. The area where the clashes took place is home to many members of the Dungan minority group, Muslims of Chinese ethnic origin.

A driver who works taking passengers from Kazakhstan’s border with Kyrgyzstan to the city of Almaty said that Masanchi village, which was at the centre of the conflict, had been sealed off.

“It is calm. But you can’t get there now. The police and the army are there,” the driver, Bakytjan, told journalists

He said the conflict had begun after a Dungan man attacked an elderly Kazakh man.

Private news agency Kaztag cited Kusei Daurov, head of the Dungan association as saying that more than ten homes were burned by “young men that had arrived” in the village of Masanchi on Friday.

Kazakhstan’s leadership prides itself on guaranteeing inter-ethnic harmony in a country where the foreign ministry says “over 100 ethnic groups are living in peace”.