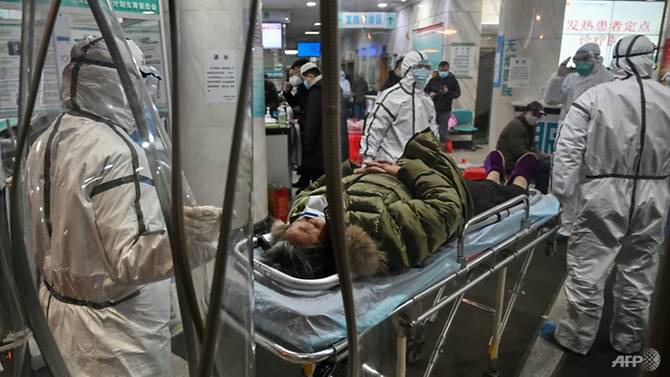 Most of the country’s deaths and overall cases have been in Hubei, a populous province in China’s centre.

The number of confirmed deaths from China’s coronavirus outbreak has risen to 259, as authorities in hardest-hit Hubei province on Saturday (Feb 1) reported 45 new fatalities. Another death was reported in Chongqing, bringing the total number of new deaths in the country to 46.

In its daily update, the provincial health commission also said newly confirmed cases of infection in Hubei continued to grow at a steady pace, with 1,347. Nationwide there were 2,102 new cases as of Jan 31.

That puts the national total at 11,791 as of Jan 31, according to the National Health Commission.

Most of the country’s deaths and overall cases have been in Hubei, a populous province in China’s centre.

The top Communist Party official in Wuhan, the central city of 11 million people where the virus first emerged in December, on Friday expressed “remorse” because local authorities acted too slowly.

The virus is believed to have emerged in December in the provincial capital of Wuhan in a meat market that sold wild game.

But the epidemic has spread far and wide as Chinese people travelled across the country and abroad over the Chinese New Year holiday that started last week.

The World Health Organization has declared the outbreak a global health emergency, but said it was not recommending any international trade or travel restrictions.

It has since ballooned into a global health emergency with cases in more than 20 countries.

Countries have scrambled to evacuate their nationals from Wuhan, with hundreds of US, Japanese, British, French and South Korean citizens evacuated so far, and more countries planning airlifts.

A flight carrying more than 300 Indian nationals left Wuhan in the early hours of Saturday for New Delhi.

About 200 US evacuees who landed in California on Wednesday have been put under a rare mandatory quarantine order for 14 days.

Russia said it would evacuate more than 2,500 of its citizens holidaying on China’s Hainan island, far from the epicentre of the outbreak, a day after sealing its remote far-eastern border.