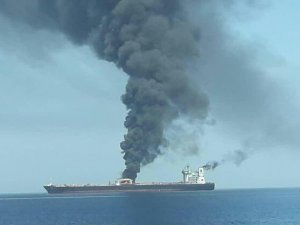 12 crew and 44 technicians were on board, eight were injured

Two people died and three are missing following Wednesday evening’s fire on a tanker off the coast of Sharjah, officials have confirmed.

Indian consulate officials briefed by authorities told Gulf News the MT Sam had 12 crew onboard and 44 technicians at the time of the incident. They included Indian, Bangladeshi, Pakistani, Ethiopian and other undisclosed nationalities.

The ship is registered to the micronesian archipelago of Palau and bears its flag, officials said.

Sources said the ship was bound for India where it was due to be scrapped.

The sources explained that the 44 technicians were handling the dismantling of the ship while it was bound for scrappage when the fire took place.

No immediate comment was available from the Federal Authority for Marine Transport.

However, on Wednesday night Jaber Al Lamki, Executive Director of Media and Strategic Communications, National Media Council, tweeted, “Federal Transport Authority – Land & Maritime (FTA) stated that the UAE authorities are working to put out a fire that broke out aboard an oil tanker 21 [nautical] miles off the cost of Sharjah after receiving a distress message. A proper investigation is in progress,” he added.

Authority said Wednesday all concerned departments were working to extinguish the fire, which broke out onboard an unloaded tanker.

“Teams of rescue and emergency response at ports started providing the necessary help once they received the distress call and rescued the tanker’s crew,” the Authority said in a statement.

The Federal Transport Authority confirmed the tanker is “not loaded with any oil shipments and early reports attribute the incident to an accident during maintenance operations.”