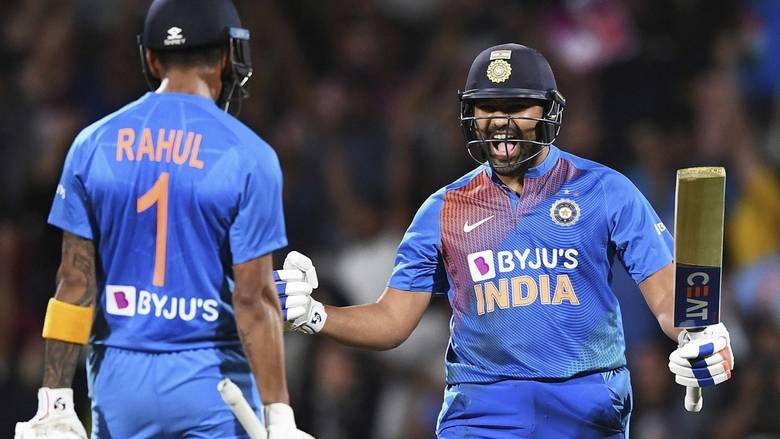 Rohit Sharma smacked sixes off the final two balls of a dramatic super over for India to win the third Twenty20 against New Zealand in Hamilton on Wednesday and wrap up the series.
It sealed a man-of-the match performance from Sharma, the most prolific batsman in cricket’s shortest format, who showed his class with 65 to set up India’s 179 for five which was matched by New Zealand’s 179 for six.
New Zealand skipper Kane Williamson had kept his side in the hunt with a classy 95 and when the scores were tied he scored another 11 of their 17 runs batting first in the super over.
India only scored eight off the first four deliveries in reply before Sharma smacked Tim Southee for back-to-back sixes to clinch the match and the series with two games to spare.
“It was unbelievable. I thought at one stage we were gone, down and out,” a relieved Kohli said.
“He (Williamson) played a brilliant innings and they probably deserved to finish the game off the way he batted and the way he led from the front and I feel bad for him.
“But Rohit was outstanding in the first half and the last two balls as well.”
India comprehensively won the first two games of the five-match series when they bowled first, which is their preferred option.
When Williamson won the toss in Hamilton he put immediate pressure on the tourists by electing to bowl, forcing India to set rather than chase a total.
After a slow start in which Sharma had only 12 runs off 11 balls, he erupted over the next 12 deliveries to reach his half century.
In a brutal attack on pace bowler Hamish Bennett he hit three sixes and two fours off five consecutive deliveries.
But when Colin de Grandhomme removed KL Rahul for 27 and Bennett followed with the wickets of Sharma and Shivam Dube, India slumped from none for 89 to three for 96 after 11 overs and were restricted to a further 83 runs in the remainder of the innings.
New Zealand’s reply was steady but unspectacular until the back half of the innings when Williamson charged in an attempt to keep the series alive.
His 95 included eight fours and six sixes and with four balls remaining New Zealand only needed two to win.
Williamson was caught behind trying to edge the winning runs past the keeper and after Ross Taylor and Tim Seifert ran a bye to level the scores, Taylor was bowled on the final ball of the innings sending the match into a super over.
It was the third super over New Zealand have faced in the past seven months and they have lost them all having gone down to England in the World Cup final and then again in a Twenty20 match in November.
“They haven’t been too successful for us,” said Williamson. “We’d probably do better trying to win it in regular time.
“It was pretty disappointing not getting across the line in the first 20 overs but it’s a game of small margins. We must learn from it.”
The fourth match is in Wellington on Friday.