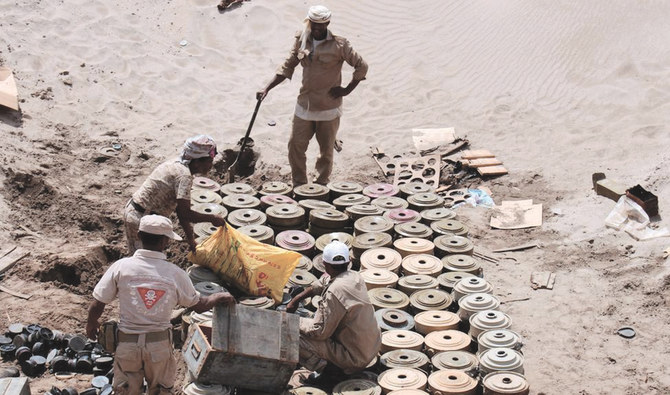 A large number of Yemeni civilians have returned to their houses in several Red Sea areas in the province of Taiz after the Saudi project for landmine clearance, known as Masam, declared them free from Houthi-laid landmines.

The Saudi-funded project said in a statement on Thursday that its mine clearance teams have defused thousands of landmines laid by the Iranian-backed Houthi militia from 10 areas in Mocha, Mouza and Wazyia districts and is working on securing the remaining heavily mined parts of the districts, calling upon displaced residents to return to their houses.

Col. Othman Al-Jahwari, an expert with the project, said that they had retrieved more than 10,000 landmines, improvised explosive devices and unexploded ordnance from different areas in the three districts and cleared almost 70 percent of 17, 000-square- meter area in Taiz. Al-Jahwari said residents have begun going back to their homes and farmlands after hearing the project’s announcement.

In the same province, six children were injured on Wednesday when a landmine planted by Houthis exploded as they were playing in Al Sofi region in Wazyia district.

Houthis have planted landmines extensively since early 2015 when Yemeni government forces, backed by massive air and logistic military support from the Saudi-led coalition, seized the momentum and regained control of areas in Taiz, Sana’a, Jawf and Hodeida.

When government forces marched along the country’s western coast towards the city of Hodeida in 2018, Houthis planted thousands of landmines on farms, roads and in houses to stop the advance. Local military commanders say Houthi landmines slowed the military offensive but did not stop it, and loyalists are currently seizing control of parts of Hodeida.

In April 2019, Human Right Watch said Houthi-laid landmines had killed hundreds of civilians, obstructed their movement and prevented lifeline humanitarian aid from reaching people. Recent reports by local organizations that document civilian deaths showed that more than 500 civilians have been killed by Houthi landmines in the province of Taiz.

Col. Abdul Basit Al-Baher, Yemen army spokesperson in Taiz, told Arab News that the Saudi project is carrying out an “exceptional mission” that cleared a large swathe of Yemeni areas from landmines. The number of civilian deaths would have been higher if the project had not stepped in, according to the army spokeperson.

“This is an exceptional humanitarian mission that has saved many lives in Yemen.

Their mission is as important or even more important than humanitarian aid,” he said. “Before the arrival of the project, people used to deactivate landmines by improvised means, which causes deaths.”

Al-Baher believed that Yemen would remain suffering from Houthi mines for the next three decades. “This is like a plague that sweeps over Yemeni lands. Almost every day we are alerted about explosions caused by Houthi landmines in Taiz. They have killed humans and animals,” he said.