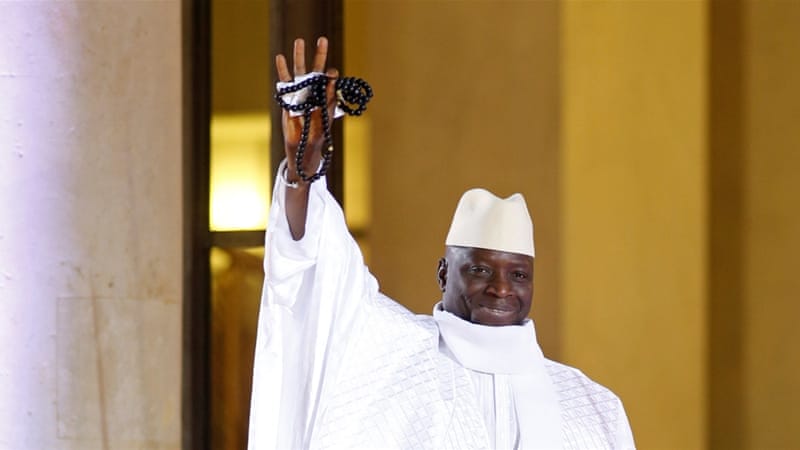 Thousands of supporters of The Gambia’s former leader Yahya Jammeh have demonstrated on the outskirts of the capital Banjul, demanding his return from self-exile.

The protest on Thursday came days after Jammeh was heard in an audio recording insisting that the West African state guarantee his right to return.

Jammeh ruled The Gambia with an iron fist for 22 years but fled in January 2017 after losing a presidential election to a relatively unknown Adama Barrow.

Calls for his return from Equatorial Guinea have grown recently as tensions heighten over Barrow’s decision to stay in office for five years – reversing a previous pledge to step down after three.

On Thursday, thousands of supporters of Jammeh’s Alliance for Patriotic Reorientation and Construction (APRC) party gathered in Sukuta, a town 20 kilometres (12 miles) from Banjul.

“We need him 100 percent. We are ready to die for him,” Ismaila Colleyk, a 26-year-old protester, told Journalists, referring to Jammeh.

“Before Jammeh left here for exile, there was an agreement for him to come back into the country after three years.”

Thousands of Gambians protested last month, demanding Barrow step down, and similar protests are planned for January 19 or 20.

The former president’s supporters argue that he has a right to return under a joint statement from the African Union, the Economic Community of West African States (ECOWAS) and the United Nations, published at the time of his exile.

The organisations committed to working with the government to ensure Jammeh’s security and rights, in particular, his right to return.

“This is why we want former president Jammeh to come back and take over the mantle of leadership,” she added.

“The fact of the matter is to meet the authorities and make it very clear to them that the agreement must be implemented,” Jammeh said in the recording.

Barrow’s cabinet has said Jammeh can return as a citizen, but cannot run for president again.

Since January 2019, about 190 witnesses have appeared before a Truth, Reconciliation and Reparations Commission set up to investigate abuses under his rule.