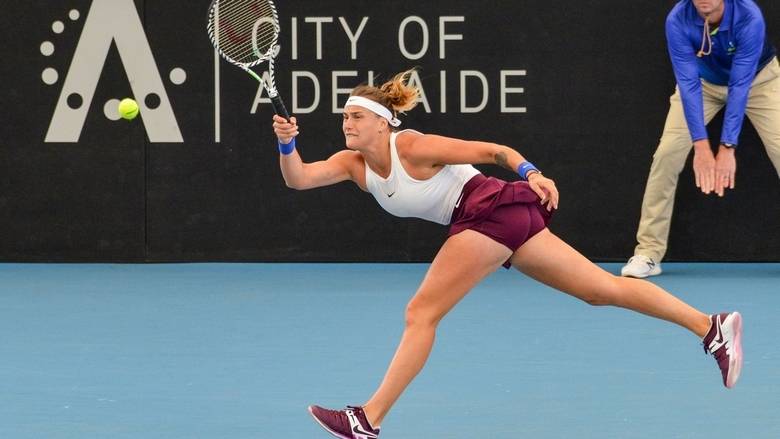 Two-time Grand Slam winner Simona Halep will head into the Australian Open with room for improvement after being upset 6-4, 6-2 by Aryna Sabalenka on Thursday at the ATP-WTA Adelaide International.
The reigning Wimbledon champion and former world number one dropped serve five times and was flattened in the second set by her opponent from Belarus.
The 71-minute rout leaves Halep standing 1-1 for the season with the first Grand Slam of the year starting on Monday in Melbourne.
Sabalenka will battle Dayana Yastremska on Friday for a place in the final after the Ukrainian 19-year-old beat a second top 20 opponent this week when she put out Croat Donna Vekic 6-4, 6-3.
Sabalenka, ranked 12th to Halep’s fourth, won her first match after two losses to the Romanian, coached by Australian Darren Cahill.
“It feels great, we had a tough match and she played well,” Sabalenka said. “I tried to stay focused on each point. I don’t care about the Grand Slam, I’m just playing each match.”
“I didn’t care about the past, I stayed in the moment, that helped me to win.”
In the first set, Halep twice lost break advantages, with Sabalenka coming through with a third break of serve in the final game on a double-fault from the seed.
In the second, the Belarussian ran away with it – Halep drew applause and raised her arms in mock triumph as she finally won a game while trailing 5-0, but the youngster fired a winning return to seal match point.
Yastremska, ranked 24th, was thrilled to get past Vekic.
“It’s nice to be in the semi-finals just in the beginning of the year,” she said. “I’m not playing my best game, but it’s still nice.”
“I’m just getting my form. I have a big goal for Australia, but I’m going to try to stay really realistic and play match by match. That’s all I can think about.”
Last year’s 2019 Australian Open semifinalist Danielle Collins crushed fourth seed Belinda Bencic, sending the Swiss out in barely an hour with four breaks of serve.
The 27th-ranked American will play either Australian top seed Ashleigh Barty or Marketa Vondrousova next.
In men’s play, South African Lloyd Harris beat Spanish fourth seed Pablo Carreno Busta 6-3, 6-3 to book a semi-final berth.
He will play a fellow qualifier after Tommy Paul advanced over Spain’s Albert Ramos-Vinolas 6-3, 6-4.
Russian third seed Andrey Rublev won his sixth match of the season, with last weekend’s Doha champion defeating Britain’s Dan Evans 6-4, 3-6, 6-3.