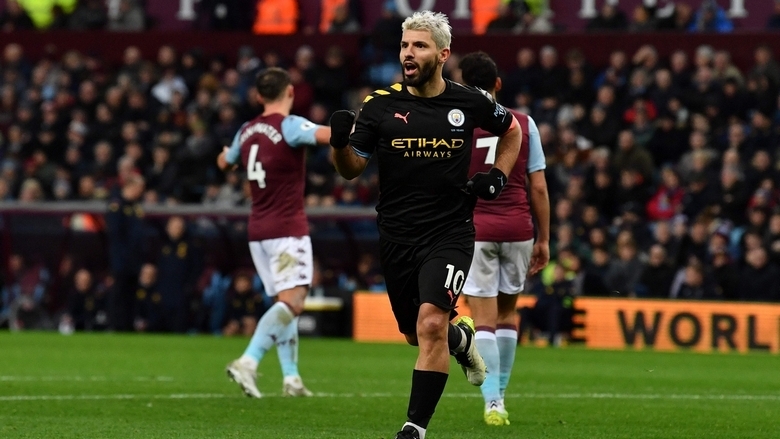 Sergio Aguero became the most prolific foreign goalscorer in Premier League history with a hat trick as Manchester City thrashed Aston Villa 6-1 to reclaim second place on Sunday.
The Argentine striker struck City’s third, fifth and sixth goals at Villa Park to take his league tally to 177, two more than Frenchman Thierry Henry managed for Arsenal and fourth on the all-time list alongside Frank Lampard.
City’s resounding victory, in which Riyad Mahrez also scored twice and Gabriel Jesus once, meant they moved above Leicester City and trimmed Liverpool’s lead to 14 points, although Liverpool have played a game less.
Mahrez’s dribble and shot opened the scoring in the 18th minute and the Algerian struck again six minutes later.
Champions City’s slick football was too much for Villa who had dropped into the relegation zone before kickoff after Watford’s win at Bournemouth.
Aguero’s fierce strike from outside the area made it 3-0 in the 28th minute before Jesus tapped in a fourth on the stroke of halftime after a stunning pass by Kevin De Bruyne.
A razor-sharp Aguero moved clear of Henry with a neat finish in the 58th minute and continued to torment a sorry home side by completing his 12th Premier League hat trick in the 81st minute.
Villa, who have fallen to third from bottom, did not manage a shot on target until they were awarded a stoppage-time penalty that was tucked away by Anwar El Ghazi.
Earlier, Watford captain Troy Deeney hailed the impact of Nigel Pearson in helping the Hornets bounce back from “rock bottom” after a 3-0 win at Bournemouth took them out of the Premier League relegation zone for the first time this season.
Abdoulaye Doucoure and Roberto Pereyra struck either side of Deeney’s fourth goal in five games as Watford moved above their hosts, whose five-season stay in the top flight looks in serious danger of coming to an end.
“The gaffer and all the boys need to take a lot of credit,” said Deeney. “We hit rock bottom at some points this season but we’ve managed to get the fans involved and do the hard work on the pitch.”
Bournemouth have taken just four points from their last 11 games and looked a side completely devoid of confidence as they slipped to second bottom.
Watford, by contrast, are reborn under former Leicester boss Pearson as they have taken 13 points from a possible 15 since his baptism of fire in a 2-0 defeat at Liverpool last month.
“We’ve found a collective way of working together to get more of what we want; performances and results. We showed resilience, game understanding and ability as well at times,” said Pearson.
Injuries have played a major part in Bournemouth’s decline and the loss of first-choice goalkeeper Aaron Ramsdale proved vital as his understudy Mark Travers was at fault for the opening goal.
The Irish under-21 international had made a good early save low to his right to deny Gerard Deulofeu, but his poor clearance was fired straight at Ismaila Sarr three minutes before half-time and the Senegalese’s cross was expertly controlled and finished by Doucoure.
“The first goal was a big shift, up until then it was two quite even teams,” Bournemouth boss Eddie Howe told Sky Sports.
“We conceded and the second half was a lot more difficult; we dipped, they rose with the confidence.
“We are not looking free-scoring and when you concede a goal it seems a long way back.”
Deeney’s return from a long-term injury has also played a big part in his side’s return to form and the inspirational captain smashed home after another dangerous run and cross by Sarr 25 minutes from time.
Bournemouth offered nothing in response and another miserable afternoon for the Cherries was rounded off when Pereyra came off the bench to produce an acrobatic finish after Andre Gray’s shot was cleared off the line.