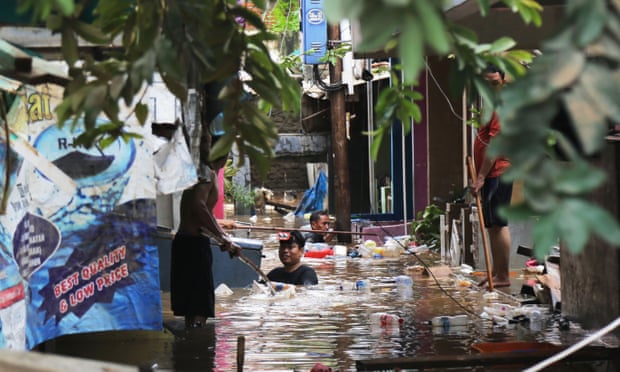 Landslides and floods triggered by torrential downpours have left at least 60 people dead in and around Indonesia’s capital as rescuers struggled to search for survivors, officials said on Saturday.

The worst monsoon rains in more than a decade deluged Jakarta this week and rising rivers submerged at least 182 neighbourhoods while landslides on the city’s outskirts buried at least a dozen people.

As the government began seeding clouds in an effort to head off further rain, Agus Wibowo of the National Disaster Mitigation Agency said the fatalities included those who had drowned or been electrocuted since rivers broke their banks on New Year’s Day. Three elderly people died of hypothermia.

Wibowo said about 397,000 people sought refuge in shelters across the greater metropolitan area with some places left 19ft under water.

“In north Jakarta, the worst flooding was in the Teluk Gong area and residents have not received any help even two days on,” said Gugun Muhammad, a community organiser. “These floods are the worst in over a decade in terms of scale and volume of water.” Residents who remain in the area are using boats to get around.

Tina Sulistio, a nutritionist, had to rescue her diabetic 93-year-old mother from her west Jakarta home by boat. There was no official rescue operation in the area, so the family had to haggle with local boatmen to get her mother to safety.

The city has put in place flood mitigation projects, but Bintang Wananda, who works on irrigation at Indonesia’s National Development Planning Agency, said that “very crucial” flood pumps were not working at seven different regions that he surveyed. He estimated that only about 10% of the pumps in Jakarta were operational.

Rising sea levels and extreme weather – both worsened by the climate crisis – threaten the megacity of 30 million people. So much groundwater has been extracted that the land under the city has become destabilised, making Jakarta the fastest-sinking city in the world. Many surface water sources are polluted.

President Joko Widodo has said that over the next 10 years the country’s capital will be moved to a site in sparsely populated East Kalimantan province in Borneo, known for rainforests and orangutans.

This has been the worst death toll since 2013, when 57 people were killed after Jakarta was inundated by monsoon rains. While floodwaters are beginning to recede slightly, the Indonesian Red Cross Society is warning people of more extreme rain predicted over the next four to seven days. It said it had evacuated 31,200 people from their homes.

The worsening annual floods are making life a misery, especially for people in slums where diseases can be spread when wastewater mixes with floodwater. While the flooding has affected both wealthier and poorer parts of Jakarta, the most vulnerable are tens of thousands of people living in flimsy housing along the banks of the Ciliwung and Cisadane rivers, mostly migrant workers and their families from elsewhere in Indonesia.

Many people in the capital resorted to what the Jakarta Post called “gallows humour”, taking to social media to post clips of people fishing from their apartment balconies and kayaking through flooded streets.

The deluge has again highlighted Indonesia’s infrastructure problems. Those returning to their homes found streets covered in mud and debris. Cars had been swept away, landing upside down in parks or piled up in alleys.

Pavements were littered with possessions, clothing, pots and pans, and old photographs. Authorities took advantage of the receding waters to attempt to clear away mud and remove piles of sodden rubbish from streets. Electricity has been restored to tens of thousands of homes and businesses, and the domestic airport has now reopened.Advertisement

Dwikorita Karnawati, head of the Meteorology, Climatology and Geophysics Agency, said more downpours were forecast and the potential for extreme rainfall will continue with more flooding likely until the rainy season ends in April.