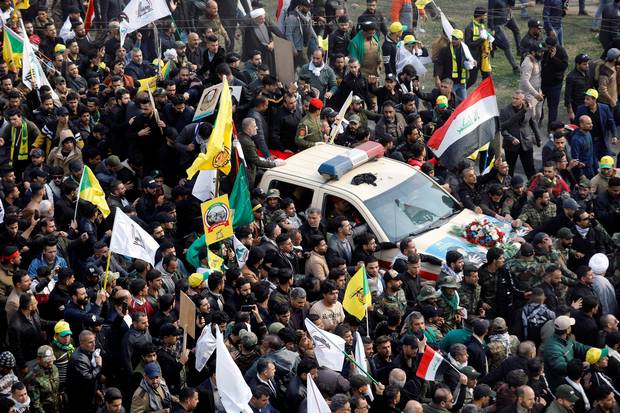 Thousands of mourners have marched in a funeral procession through Baghdad for Iran’s top general and Iraqi militant leaders who were killed in a US airstrike.

The bodies of Qassem Suleimani and others killed in the drone strike were taken on a funeral procession starting in Baghdad to chants of “death the America” on Saturday. Iranian officials said a public farewell was planned in Tehran on Sunday.

The procession began at the Imam Kadhim shrine in Baghdad, one of the most revered sites in Shia Islam. Mourners marched in the streets alongside militia vehicles in a solemn procession.

The mourners, many of them in tears, chanted “no, no, America,” and “death to America, death to Israel.” Mohammed Fadl, a mourner dressed in black, said the funeral was an expression of loyalty to those killed. “It is a painful strike, but it will not shake us,” he said.

Two helicopters hovered over the procession, which was attended by Iraq’s prime minister, Adel Abdul-Mahdi, and leaders of Iran-backed militias.

Fresh airstrikes against Iran-backed militias were reported in the Iraqi capital on Saturday morning as Iranian leaders declared Suleimani’s targeted assassination outside Baghdad airport on Friday morning “an act of war”.

The Popular Mobilisation Forces (PMF), an umbrella organisation of paramilitary groups, said five medics had been killed in the latest attack. The US denied it had carried out any attacks and the Iraqi military later issued a statement saying that no attack had taken place.

Iran’s envoy to Baghdad, Iraj Masjedi, told Iranian state media that Abdul-Mahdi had insisted on holding a public funeral for Suleimani in Baghdad along with Abu Mahdi al-Muhandis, the Iraqi militia leader killed in the same operation.

Funeral processions were also being held in the holy Shia cities of Karbala and Najaf, Iranian officials said, before Suleimani’s remains are returned to Iran on Sunday morning. Iran’s supreme leader, Ayatollah Ali Khamenei, would lead a prayer ceremony for Suleimani in Tehran and his body would be buried in his hometown of Kerman, Iranian outlets reported.

The country’s ambassador to the UN said on Saturday that the killing of Suleiman would not go unanswered. “There will be harsh revenge,” Majid Takht Ravanchi told CNN. “The time, the place, will be decided by Iran.”

Suleimani, 62, oversaw the external operations of Iran’s elite Revolutionary Guards and was the architect of an expansion of Iranian influence across the Middle East in recent decades. A Pentagon statement accused Suleimani’s Quds force of being responsible for the deaths of hundreds of US soldiers and the wounding of thousands more.

Often mooted as a future presidential candidate, Suleimani was thought to be untouchable until Friday morning’s strikes by Reaper drones on his convoy at Baghdad airport.

His killing triggered rejoicing in parts of Iraq and Syria, where he was implicated in tens of thousands of civilian deaths, but the general reaction in world capitals was one of apprehension.

“This is a moment in which leaders must exercise maximum restraint,” the UN secretary general, António Guterres, said. “The world cannot afford another war in the Gulf.”

The Pentagon ordered 3,000 reinforcements to the region on Friday, but US leaders including Donald Trump have characterised Suleimani’s killing as a pre-emptive strike to prevent American deaths in imminent attacks.

In a brief address from his Florida resort Mar-a-Lago on Friday, the US president described Suleimani as “the number one terrorist anywhere in the world”, and claimed the had been planning “imminent and sinister” operations against US diplomats and personnel.

Trump said, however, that he was not seeking regime change in Iran. “We did not take action to start a war,” he said.

Senior US officials added on Saturday that Suleimani’s killing would help to disrupt future military operations sponsored by Tehran.

“I’m just saying that Suleimani was in many ways the indispensable man, and with Suleimani dead it will be very difficult for these proxies to be organised on the scale, lethality and effectiveness that they had under Suleimani,” an official said.

“There were things he could do that nobody else could do. He was not a decentralised manager. He was a hands-on, down-to-the-details manager. And we are not safe in the region as long as Iran is pursuing this general strategy, but we are safer without him than we are with him,” he said.

The assassination came as Iraq was already on the brink of a all-out proxy war and hours after a two-day siege of the US embassy in Baghdad by a group of PMF militiamen and their supporters. The Pentagon said Suleimani had masterminded the embassy attack.

The siege was in response to US airstrikes on camps run by a PMF-affiliated militia particularly closely aligned with Tehran, which in turn was a reprisal for the militia’s killing of a US contractor in an attack on an Iraqi army base on Friday.