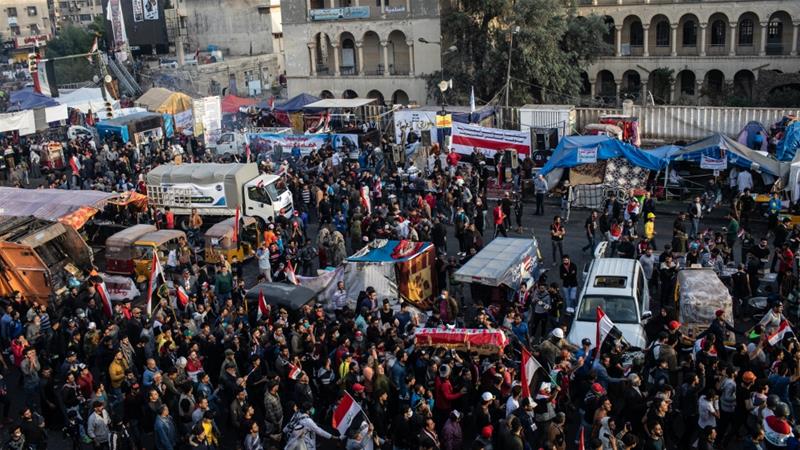 Anti-gov’t protesters in Baghdad accuse authorities of double standard for not cracking down on pro-Iran demonstrators.

Anti-government rallies continued in Iraq’s capital in the aftermath of a separate day-long protest outside the United States embassy.

Protesters have for months occupied Baghdad’s iconic Tahrir Square, just across the Tigris River from the Green Zone, home to government offices, the United Nations headquarters and foreign embassies.

The youth-led demonstrations have rocked Iraq since early October, demanding the removal of a governing class seen as corrupt, inept and beholden to Iran.

In a separate development, on Tuesday, an angry mob marched into the heavily-fortified Green Zone and to the US embassy, outraged over US air attacks that killed 25 fighters from the Iran-backed Hashd al-Shaabi paramilitary force over the weekend.

They surrounded the embassy for just over 24 hours, leaving on Wednesday afternoon after an order from the Hashd, also known as the Popular Mobilisation Forces (PMF).

The anti-government demonstrators insist their movement is entirely unrelated to the crowds that vandalised the US mission.

“We’ve got nothing to do with that,” one demonstrator in the southern protest hotspot city of Diwaniyah told Journalists.

Journalists said that the anti-government demonstrators, who have been protesting for nearly three months, have “renounced any link” with the crowds that marched on to the US embassy.

“What they are saying is that crowd embodies many of the grievances that these [anti-government] protesters have voiced,”

Protesters on Thursday occupied some streets in Baghdad, where most government offices and schools have shut down.

They accused Iraqi security forces of a double standard – saying the protesters who supported the PMF were not met with a crackdown, as they have been.

About 460 people have been killed in protest-related violence over the past three months, with around 25,000 others wounded.

Demonstrators have warned that these killings, along with kidnappings and different forms of harassment, are an attempt to scare them into halting their movement.

But many have persisted, and rallies rocked the city of Diwaniyah on Thursday.

“What happened in front of the US embassy was an attempt to draw people’s eyes away from the popular protests now in their fourth month,” Ahmed Mohammad Ali, a student protester in Nasiriya, told Reporters.

“We’re still here, protesting for change and hoping for victory.”