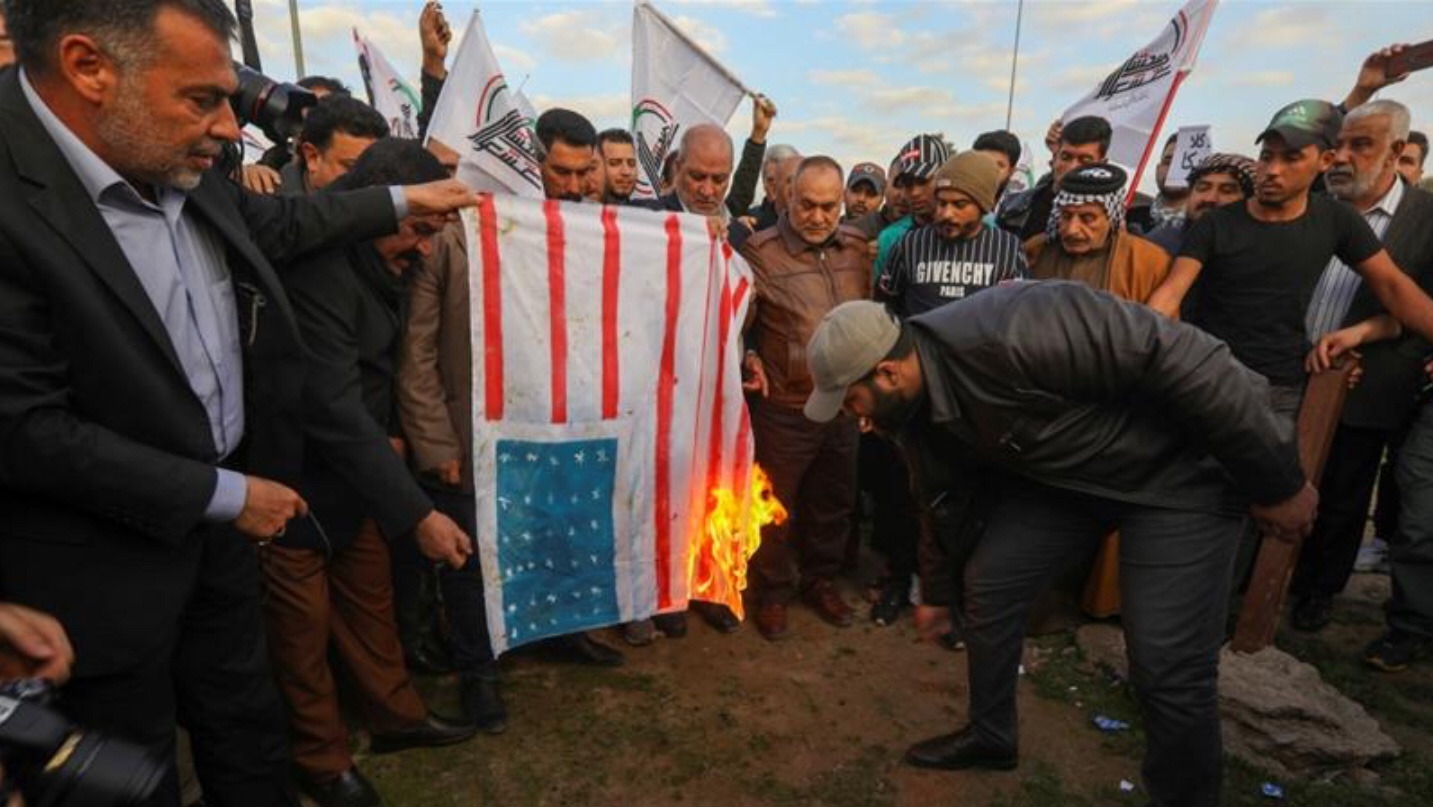 The United States has carried out attacks on the Shia armed group Kataib Hezbollah in Iraq and Syria, the Pentagon said on Sunday, killing at least 25 fighters since.

Washington said it targeted the Iran-linked group in western Iraq and eastern Syria in response to the killing of a US civilian contractor two days prior.

Iraqi security and militia sources said at least 55 fighters were wounded in the air attacks, adding that one of the raids had targeted the group’s headquarters near the western al-Qaim district on the border with Syria.

US-Iran tensions have been rising since Washington pulled out of a landmark nuclear agreement with Tehran last year and began reimposing crippling sanctions.

The attack has further fuelled tensions between Washington and Tehran, who are traditional rivals.

Commenting on the development, another powerful pro-Iran faction in Iraq, Asaib Ahl al-Haq – whose leaders were recently hit with US sanctions – called for the US to withdraw from the country, while Lebanon’s powerful Shia group Hezbollah condemned the US for attacking groups that helped it defeat ISIL.

Here are some reactions from the region’s major players:

Iraqi Prime Minister Adel Abdul Mahdi on Monday condemned the US air strikes and said the attack would have “dangerous” consequences.

“The prime minister described the American attack on the Iraqi armed forces as an unacceptable vicious assault that will have dangerous consequences,” his office said in a statement.

Iraq’s National Security Council said targeting Iraqi paramilitary groups will force it to reconsider its relationship and work with the US-led international anti-ISIL coalition stationed there. It added the attacks were a violation of sovereignty and that US forces acted based on their own political priorities and conclusions.

Protecting Iraq, its military bases, and all troops stationed there is exclusively the responsibility of Iraqi security forces, the council said.

Russia’s foreign ministry on Monday described the “exchange of strikes” between Hezbollah and US forces in Iraq as “unacceptable”, and called for restraint from both sides.

“We consider such actions unacceptable and counterproductive. We call upon all parties to refrain from further actions that could sharply destabilise the military-political situation in Iraq, Syria, and the neighbouring countries,” a ministry statement said.

Russia is a key backer of Syrian President Bashar al-Assad.

Syria urges US against interfering in Iraq’s internal affairs

Syria condemned the US air strikes on the region, and expressed solidarity with Iraq and its people, state news agency Sana reported.

An official at the foreign ministry said on Monday: “Syria denounces the US attack on the Popular Mobilization Forces which defend Iraq’s sovereignty and independence, as well as denouncing any aggression that targets the sovereignty, independence, and freedom of Iraq and its people,” Sana reported.

“Syria expresses its full solidarity with Iraq’s people and institutes, and reiterates its demands for the US to not interfere in the internal affairs of Iraq,” the source said, according to Sana.

Israel lauds ‘important operation’ against Iran and its proxies

Israeli Prime Minister Benjamin Netanyahu’s office said he congratulated US Secretary of State Mike Pompeo “on the important operation by the United States against Iran and its proxies in the region”.

In his remarks, Netanyahu praised the US’ “important action against Iran and its militias in the Persian Gulf region,” the Jerusalem Post reported.

Iran condemns US support for ‘terrorism’

Iran, which denies involvement in attacks on US forces, condemned the raids as “terrorism”.

“These attacks have once again proved America’s false claims in fighting Daesh … as the United States has targeted the positions of forces that over the years have inflicted heavy blows to Daesh terrorists,” Iran’s government spokesman Abbas Mousavi said separately on Monday, referring to ISIL.

“With these attacks, America has shown its firm support for terrorism and its neglect for the independence and sovereignty of countries and it must accept consequences for its illegal act,” he said in a statement.

The spokesman said the presence of foreign forces in the region was the cause of insecurity and tensions.

“America must put an end to its occupying presence,” said Mousavi.

In a statement on Sunday night, Kataib Hezbollah said its battle with the US is “now open”.

“Our battle with America and its mercenaries is now open to all possibilities,” the targeted group said in a statement.

“We have no alternative today other than confrontation and there is nothing that will prevent us from responding to this crime.”

Iraq’s top Shia cleric called on the Iraqi government to step in and prevent the country from turning into “an arena for settling accounts” between regional and international powers.

In a statement, Grand Ayatollah Ali al-Sistani condemned the “atrocious aggression” by the US and called for the respect of Iraq’s sovereignty and to abstain from violating it “under the pretext of responding to some illegal practices by some sides.”

Al-Sistani, however, added that “only Iraqi authorities are entitled to deal with these practices and take necessary measures to prevent them.”

The cleric’s comments appeared to be a warning against any retaliation by Iran-backed paramilitary groups.

“Our response will be very tough on the American forces in Iraq,” Mohandes said.

Mohandes is a senior commander of Iraq’s Popular Mobilisation Forces (PMF), an umbrella grouping of paramilitary organsations mostly consisting of Iranian-backed Shia militias that was integrated into Iraq’s armed forces.

He is also one of Iran’s most powerful allies in Iraq and formerly headed Kataib Hezbollah, which he founded.