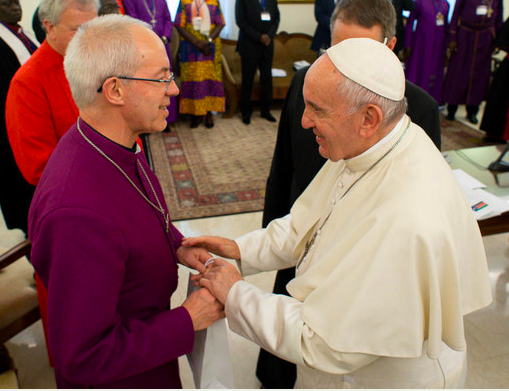 “May Christ bring his light to the many children suffering from war and conflicts in the Middle East and in various countries of the world.

VATICAN CITY: Christmas celebrations kicked off around the world on Wednesday, with Pope Francis appealing for peace in many of the world’s hotspots while festivities were muted for Filipinos battered by a typhoon, as well as in strike-bound France.
“May Christ bring his light to the many children suffering from war and conflicts in the Middle East and in various countries of the world,” Francis said in his traditional Christmas message at the Vatican, singling out the crises in Venezuela and Lebanon as well as armed conflicts ravaging many African countries.
Earlier Wednesday, the pope and the Archbishop of Canterbury Justin Welby sent wishes of “peace and prosperity” to South Sudan as negotiations faltered between the African country’s government and rebels.
The spiritual leaders of more than 1.3 billion Christians said they were praying “for a renewed commitment to the path of reconciliation and fraternity” in the world’s newest nation.
Typhoon Phanfone meanwhile brought a wet, miserable and terrifying holiday season to the central Philippines, stranding tens of thousands of people.
In France, Christmas was also a gloomy affair as a crippling transport strike against pension reform was set to enter its fourth week, ruining the plans of many to gather with family and friends.
Britain’s Queen Elizabeth II arrived for the annual Christmas Day service in Sandringham without her ailing husband Prince Philip, 98, who was released from hospital after a four-night stay for an unspecified illness.
But she was accompanied by Prince Andrew, her scandal-plagued second son, whose disastrous attempts to distance himself from American convicted paedophile Jeffrey Epstein’s victims have backfired. The prince gave up his public duties last month.
In her traditional Christmas Day message later Wednesday, Queen Elizabeth was to describe 2019 as “quite bumpy” after a year of crises in the royal family.
A bank robber brought some offbeat Christmas joy to stunned passers-by in Colorado, police confirmed Wednesday.
The white-bearded man robbed the bank in Colorado Springs on Monday, then threw the stolen cash in the air for people to grab, US media reported.
“He started throwing money out of the bag and then said, ‘Merry Christmas!” witness Dion Pascale told local media. The suspect was later arrested.
In the biblical town of Bethlehem on Tuesday, a few hundred worshippers gathered in the church on the site of Jesus’s birth for midnight mass, attended by Palestinian president Mahmud Abbas. Hundreds more gathered outside, watching on screens in the crisp air.
At midnight bells rang out throughout the town, before Archbishop Pierbattista Pizzaballa, the most senior Roman Catholic official in the Middle East, led hymns and said prayers.
“At Christmas, all the world looks to us, to Bethlehem,” he said.
Pizzaballa, who had to cross Israel’s separation barrier to get from Jerusalem to Bethlehem, said it was a difficult time but there was reason for hope.
“We see in this period the weakness of politics, enormous economic problems, unemployment, problems in families,” he said.
“On the other side, when I visit families, parishes, communities, I see a lot of commitment… for the future. Christmas is for us to celebrate the hope.”
The first church was built on the site of Jesus’s birth in the fourth century, though it was replaced after a fire in the sixth century.
This year, celebrations were bolstered by the return of a wooden relic believed to be from the manger of Jesus.
Sent as a gift to Pope Theodore I in 640, the piece had been in Europe for more than 1,300 years before being returned last month, said Francesco Patton, chief custodian for the Holy Land.
In the square by the church, Palestinian tourism minister Rula Maayah told AFP it had been a good year, with 3.5 million tourists visiting the city.
But fewer Christians from the Gaza Strip were in attendance than in previous years, as Israel had granted permits to just around 300 of the 900 or so people who applied, said Wadie Abunassar, an adviser to Church leaders in the Holy Land.
Paris’s Notre Dame Cathedral, ravaged by fire in April, was unable to hold its traditional Christmas Eve Mass for the first time in more than 200 years, with the faithful gathering at other nearby churches instead.