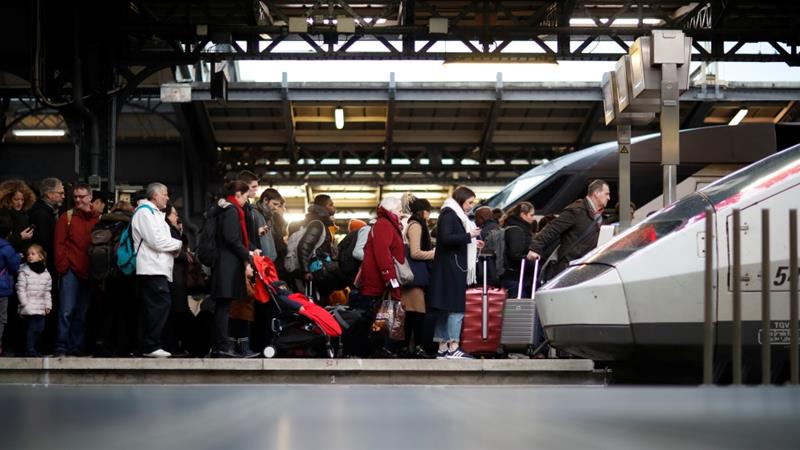 Travel disrupted as transport workers extend strike over pensions while in Paris.

A nearly three-week strike over pension reforms in France is disrupting Christmas Eve celebrations, with tens of thousands of train ticket holders searching for alternative ways to travel over the holidays.

Workers at the national SNCF and Parisian RATP rail and public transport companies are protesting at the government’s plan to meld France’s 42 pension schemes into a single points-based system, which would see some public employees lose certain privileges.

There will be no surprises under the Christmas tree for those eager to travel on Tuesday, with up to 40 percent of high-speed rail and express regional trains cancelled, along with up to 20 percent of other trains.

The SNCF has also announced that on Tuesday evening, trains between Paris and its suburbs will be halted. Some lines will reopen Wednesday morning, others only on Thursday.

Laurent Brun of the hardline CGT union said strikers have a “set of plans to celebrate Christmas” together while maintaining action all week.

Talks between the government and unions last week failed to find a middle ground, and strikers vowed there would be no holiday truce unless the pension overhaul plan was scrapped.

Trade unions and others involved in the strike will meet with the government on January 7 to discuss the pension reforms, Prime Minister Edouard Philippe’s office said Monday. The talks are expected to run through the month of January.

On Saturday and Sunday, the last weekend before Christmas, the SCNF provided half the usual number of TGV high-speed trains, a third of regional TER services, a quarter of intercity trains, and one in five connecting Paris to its outer suburbs.

The government’s plans would see some public employees – notably railway staff – lose early-retirement and other benefits.

But the government insists the new system would be more fair and transparent.

Unions are hoping for a repeat of 1995 when the government backed down on pension reform after three weeks of metro and rail stoppages just before Christmas.

Their action is taking a heavy toll on businesses, especially retailers, hotels and restaurants, during what should be one of the busiest periods of the year.

No mass at Notre Dame

Elsewhere, for the first time in more than 200 years, worshippers in Paris will not be able to attend Christmas mass at Notre Dame cathedral, still being restored after a devastating fire.

“There won’t be a midnight mass at Notre Dame. The last time this happened was during the French Revolution. Since 1803, there have always been Christmas masses at Notre Dame,” said a Paris diocese spokeswoman.

The April 15 fire caused the roof and spire to collapse, although the main bell towers and outer walls were saved, along with religious relics and priceless works of art.

“It’s painful because we would have liked to celebrate Christmas at Notre Dame but, at the same time, there is also hope: we’re pressing ahead with the rebuilding, for example, this huge crane which will help remove this damn scaffolding,” said Monsignor Patrick Chauvet, the cathedral’s senior administrative cleric.