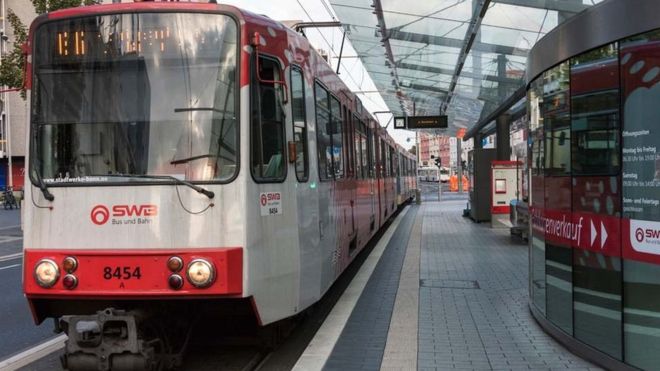 Passengers who managed to bring a speeding tram to a halt in Germany after the driver suffered a medical emergency have been hailed as heroes.

Panic spread through the tram on Sunday as it sped through stations towards the western city of Bonn.

Two men smashed their way into the cabin of the driver, who was unresponsive.

A woman called the transport company for instructions and the passengers brought the tram to a stop.

Prior to breaking into the cabin, terrified passengers called the police and the emergency brake lever failed to stop the vehicle. The incident happened at around 01:00 local time (00:00 GMT).

The local transport operator SWB has defended itself as prosecutors investigate the incident.

The company said the emergency brake lever does not immediately halt the vehicle but alerts the driver who can then communicate with passengers and bring the tram to a stop.

Systems designed to send out alerts if a driver loses consciousness appear to have malfunctioned.

The driver was recovering in hospital while the men who stopped the tram escaped with minor injuries.