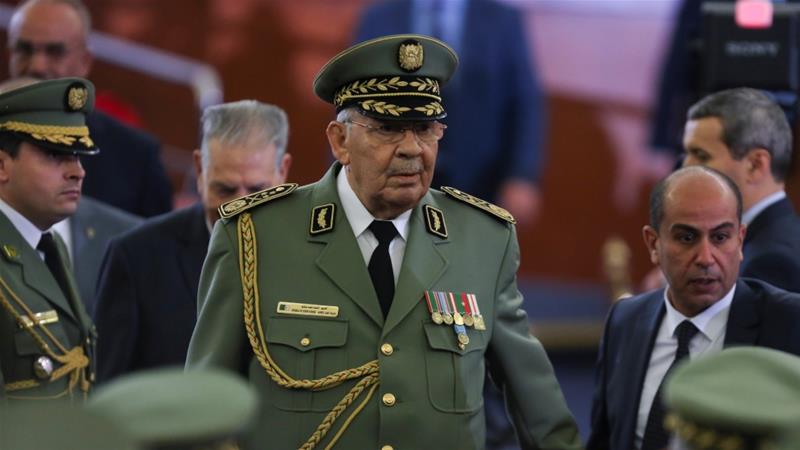 Algerian government radio said he died on Monday morning in an Algiers military hospital after a heart attack.

Gaid Salah, 79, was seen as Algeria’s de facto leader since the country’s longtime President Abdelaziz Bouteflika was removed from office in April amid widespread anti-government demonstrations.

He played a key role pushing through the December 12 presidential elections in the face of stiff opposition on the streets.

Gaid Salah was present at the inauguration of this gas-rich country’s new president last week.

President Tebboune announced that the head of land forces, General Said Chengriha, would take over as acting chief of staff of the armed forces.

The army’s prominent role was underlined last week at Tebboune’s inauguration, during which he embraced Gaid Salah and presented him with an order of merit immediately after his own swearing-in.

“The army hierarchy is unified and it will move on after Gaed Salah as it did before him,” said a retired general who asked not to be named. “Algeria’s army is a single block, not under the influence of one general but with consensus as its engine.”

Life of a soldier

Born on January 13, 1940 in the eastern Batna province, Gaid Saleh participated in the Algerian struggle against the French colonial rule between November 1, 1954 and March 19, 1962.

After Algeria’s independence, he pursued his career in the Algerian army, moving up to the rank of major general in 1993.

In 1994, he was appointed as commander of the army’s ground forces during Algeria’s civil war.

After the 2004 presidential election, Gaid Saleh was appointed as Algerian army’s chief of staff.

The army then backed a series of arrests of Bouteflika allies and senior businessmen in an anti-corruption campaign that was widely seen as a purge of the military’s rivals within the ruling system.

But it was not enough to appease the Algerians, many of whom had begun calling for Gaid Salah’s resignation and for the military to step away from the running of the major natural gas exporter.

One constant chant throughout the protests has been for: “A civilian state, not a military state.”