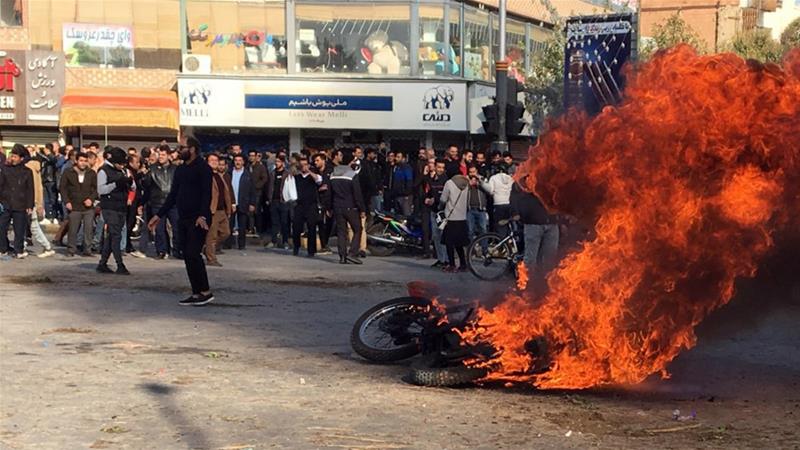 Human rights group says children were among those killed and calls for the release of detained demonstrators.

At least 304 people have been killed in the recent protests in Iran, Amnesty International reported on Monday, accusing security forces of “massacring” unarmed demonstrators.

Video footage obtained showed Iranian security forces opening fire on protesters “who did not pose any imminent risk”, according to a report by the London-based rights group. It called the actions of the Iranian government a “vicious crackdown”.

Philip Luther, the Middle East and North Africa director at Amnesty, said its information was based on “harrowing testimony from eyewitnesses”.

Thousands of protesters, as well as journalists, human rights defenders and students, were arrested, the group said

“Almost immediately after the Iranian authorities massacred hundreds of those participating in nationwide protests, they went on to orchestrate a wide-scale clampdown designed to instil fear and prevent anyone from speaking out about what happened,” said Luther.

Most of the deaths were caused by gunshots to the head, heart, and other vital organs, indicating security forces were “shooting to kill”, the report said.

“These numbers are nothing more than groundless claims,” judicial spokesman Gholam-Hossein Ismaila said, according to the semi-official ISNA news agency.

Nationwide protests erupted on November 15 after a surprise announcement about an increase in the price of fuel by about 50 percent. Angry demonstrators torched petrol stations and government offices in response.

Iran said the money was needed for the country’s most impoverished citizens to offset crippling US sanctions reimposed last year after Washington pulled out of the historic nuclear deal with world powers.

Iranian authorities have not announced an official death toll. Tehran has previously rejected Amnesty’s accounting of the number of people killed, describing it as “fabricated” while calling the human rights group “biased”.

Manoureh Mills, Iran researcher at Amnesty, said the investigation of the killings and arrests during the protests have not ended.

“We are continuing to receive information on a daily basis regarding the arrests and enforced disappearance of people in Iran and also on the killings that took place during the protests,” she told reporters.

Amnesty reported that children as young as 15 were jailed along with adults.

“Any children that have been detained solely for taking part in the protests must be immediately and unconditionally released,” Mills said.

Amnesty’s Raha Bahreini earlier told reporters “unless the authorities are held to account by the United Nations and the international community, the unlawful killing will worsen and we will see more bloodshed”.

“Amnesty International has received reports that authorities have moved injured protesters from hospitals to detention facilities, putting their lives at risk by denying them potentially life-saving medical care,” Bahreini said.

Ali Fathollah-Nejad, a visiting fellow at the Brookings Doha Centre, described the protests and killings as “a traumatising experience to Iranian society, even among the conservative parts”.

“The high death toll, coupled with the internet shutdown, has left a deep and lasting mark on Iranian society, economy and politics,” Fathollah-Nejad told journalists .