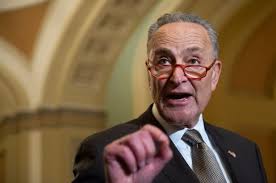 The top Democrat in the US Senate is accusing President Donald Trump of “orchestrating a cover-up”.

Chuck Schumer has called for current and former White House aides to testify at Trump’s impeachment trial over withholding aid to Ukraine.