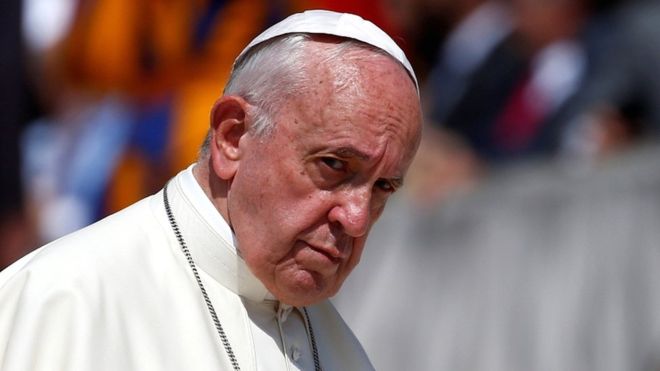 Pope Francis has abolished a Vatican rule which forbade anyone who reported they had been sexually abused by a priest from talking about it.

The rule, known as pontifical secrecy, is also lifted for those who testify in a Vatican trial over clerical sexual abuse.

Church leaders called for the rule’s abolition at a February Vatican summit.

Information in abuse cases should still be treated with “security, integrity and confidentiality”, the Pope said.

He also instructed Vatican officials to comply with civil laws, while maintaining confidentiality, and assist the civil judicial authorities in investigating such cases.

The Pope has also changed the Vatican’s definition of child pornography, increasing the age of the subject from 14 or under to 18 or under.

On his 83rd birthday, Pope Francis has responded to a longstanding complaint from survivors by announcing that any testimony gathered by the Church in relation to cases of sexual violence, the abuse of minors and child pornography will now be made available to state authorities.

In the past, the Church has been accused of using secrecy laws as a justification for not reporting cases of abuse. The consequence of breaching the pontifical secret was excommunication from the Church, so there was little incentive to be open to state authorities. That prohibition has now been abolished.

It is the latest attempt by the Roman Catholic Church to address the scourge of clerical abuse that has manifested itself across continents and in a range of religious institutions.

The Pope’s troubleshooter on sexual abuse, Archbishop Charles Scicluna of Malta, has added to Tuesday’s announcement saying that if it receives a specific request from a state authority, then the Church will now co-operate.