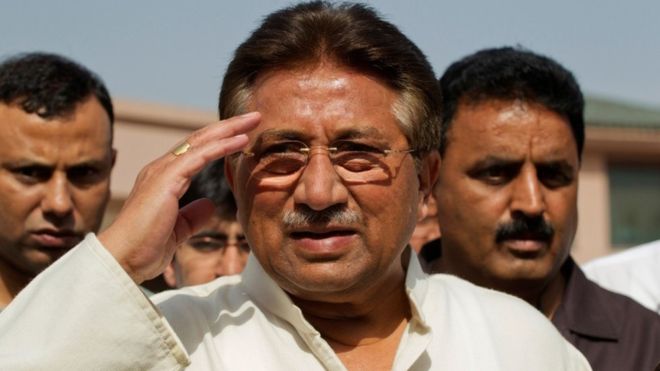 Musharraf, who is in self-imposed exile in Dubai, has been on trial for imposing a state of emergency in 2007.

A special court in Pakistan has sentenced former military ruler Pervez Musharraf to death on charges of high treason and subverting the constitution.

“Pervez Musharraf has been found guilty of Article 6 for violation of the constitution of Pakistan,” government law officer Salman Nadeem told Reuters.

The treason trial against Musharraf – for imposing the state of emergency on November 3, 2007 –  began in 2014.

Musharraf, who is in self-imposed exile in Dubai, was not immediately available for comment. He has denied the charges in the past.

‘No one has immunity’

Musharraf’s actions in 2007 lie at the centre of the treason case against the 76-year-old former ruler.

On November 3, the military ruler imposed a “state of emergency”, suspended the constitution and detained senior political leaders and judges.

The attempt prompted widespread protests by lawyers across the country, who were later joined by political parties and other groups

Speaking to Journalists, political analyst Tariq Pirzada said the ruling “sends a signal that Pakistan is changing and its judicial system has changed”.

“No one has immunity,” he said. “As for the armed forces of Pakistan, he [Musharraf] is one of the most popular guys within their rank and file. They will be hating this verdict.”

Musharraf took power in a military coup in 1999, ruling the South Asian country for nine years before being removed when his political party was routed in a general election.

He was born in the old city of New Delhi in 1943, four years before the partition of the Indian subcontinent into India and Pakistan. Shortly after partition, his parents left for the southern Pakistani city of Karachi, a haven for millions who left northern India for the newly created Muslim nation of Pakistan.

The son of a career diplomat, Musharraf was commissioned in Pakistan’s army in 1964, joining the officer corps and seeing action in the country’s 1965 and 1971 wars against India.

He rose swiftly through the ranks, and, in 1998, was appointed as army chief by then-Pakistani Prime Minister Nawaz Sharif.

Pakistan’s powerful military has ruled the South Asian country for roughly half of its 72-year history, and the position is considered one of the most powerful in the country.