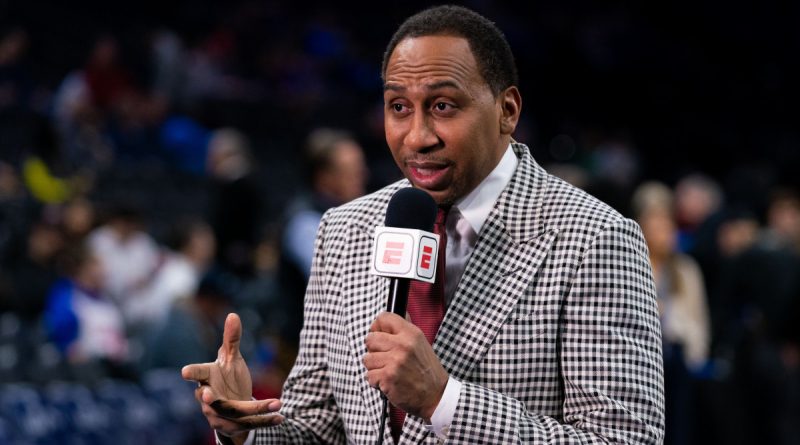 As a four-time NBA champion and four-time Finals MVP, LeBron James has entered a rare echelon in modern basketball, one dominated by the legendary Michael Jordan. Yet even with all of James’s brilliance, Stephen A. Smith is among those who believes that Jordan still operates on a different landscape.

“LeBron James is not better than Michael Jordan,” Smith says. “I don’t care what the numbers say. Jordan is the greatest player in the history of basketball.”

Smith’s predilection and gift for debate are well known. Bold, authoritative insight has made him an indispensable piece of the basketball community. He has established himself as a purveyor of hardwood knowledge, becoming an integral voice for ESPN on SportsCenter, First Take and NBA Countdown. And while it has been said that the meek will one day inherit the earth, Smith does not adhere to that philosophy, especially when it comes to the NBA. He is particularly passionate when discussing the Nets, who, even with Kevin Durant missing the last four games due to a strained left hamstring, have captured six in a row.

“The Brooklyn Nets better damn well come out of the East or this season is a failure,” Smith says. “When you have Kevin Durant, James Harden, and Kyrie Irving, you should be the favorite. Clearly the pressure is on, but you have to applaud the job Doc Rivers, Elton Brand and Daryl Morey have done in Philadelphia. You can’t ignore what is happening there, but all the pressure is on the Nets to come out of the East. If they don’t, they won’t live it down.”

Known for indomitable, unshakable analysis, Smith now has a new opportunity with ESPN. His new show, Stephen A’s World, streams exclusively on ESPN+. The setting is a refreshing change of pace for Smith, as it allows guests to showcase their interests while also highlighting his personality.

“I don’t want someone to look at me and think all I do is debate or all I want to do is debate,” Smith says. “I definitely will make my point vehemently, but I also know how to relax and have a good time.

“This is a platform that pulls me away from the combative format I do in the morning with a debate show. And what I love about this show is that there are so many great things to celebrate. This is an opportunity to celebrate them, especially coming off last year and all the loss we’ve suffered.”

Now 53, Smith first made a name for himself in print media, embedding versatility and range in his writing. His ongoing ascent at ESPN is a remarkable journey that has combined passion with an unremitting work ethic. He has become a television commodity and one of basketball’s most noteworthy analysts, far more than he ever envisioned as a student at Thomas Edison Vocational and Technical High School in Queens.

“I come from very humble beginnings, ones that I will never forget,” Smith says. “There was a time in my life that I knew rats and roaches. I know what it’s like not to have heat in the house, to have to turn on the stove to get a source of heat, or have one box of cereal that needed to last the next two weeks. My determination was to get away from that and never go back.

“That’s why I present myself in the manner I do. I want to affect the lives of people from disenfranchised communities. Long before I could afford my suits and shoes, I tried to remain as professional as I could possibly be. That’s still my mentality. If you aspire to succeed in corporate America, how you present yourself is half the battle. I am about my business—I am not playing, and neither should you.”

Smith is polished, opinionated and dynamic on the air, but his greatest source of pride does not emanate from his impressive list of accomplishments. Despite being known for sharp takes and that trademark propensity to debate, a much softer side of Smith is revealed when discussing the inspiration for his success.

“Everything I do, it’s all a result of my mother,” Smith says. “I lost her four years ago after her battle with cancer. She was the greatest person I’ve ever known. I am a proud momma’s boy—she was my everything.”

Smith’s high school was right around the corner from Queens General Hospital, where his mother was a registered nurse for 25 years. Whether he was visiting her after school, or later in life when he shared the successes and heartbreaks of a career in the public eye, Smith was always grateful to be in the presence of the woman who loved him unconditionally.

“My number-one objective throughout my life was to make my mother proud, and she always knew I strived to do just that,” Smith says. “I had an absolute fixation on not disappointing her—that was just an impossible thought for me to contemplate. She was always my inspiration, and to be honest, she always will be.”

In an effort to make his mother proud, Smith applied himself in school. He had his strengths as an athlete, yet his true talent was writing, which perfectly complimented his love of reading. A secret to his success, he revealed, was initially picked up from reading, as an inquisitive Smith would want to know every detail of a story. That skill transferred over to the way he absorbed the news around him, particularly the manner in which it was delivered.

“I am a byproduct of the TV generation,” Smith says. “I idolized Howard Cosell, who was so distinct, and I idolized Bryant Gumbel, and it’s an honor to even say that I know him. I had so many strong influences. Ed Bradley from 60 Minutes, and Ralph Wiley, who I grew up reading, God rest their souls. I’m honored to have such a relationship with Michael Wilbon. He is a sensational talent and an even better person. I’ve learned from so many talented people, including the late, great Stuart Scott, and the late, great John Saunders. They all had one thing in common, and it’s their believability.”

Believability was the constant for Smith in the coverage he consumed. Growing up, Smith had such a strong affinity for politics, watching Ted Koppel, Peter Jennings and Dan Rather, as well as religiously watching Sam Donaldson cover the White House. He was drawn to each reporter for their constant pursuit of a story, and the believable way they presented their news.

“Watching these professionals do their job with such professionalism and stoic neutrality, I admired it,” Smith says. “Much like the others I mentioned, they were believable, and that’s what I was determined to be. When you see me, whether I’m right or wrong—and I’m going to be right a hell of a lot more than I’m going to be wrong—people need to know that they see an individual who believes in his work and believes what he says.”

Smith has grown into an entity far larger than he ever could have imagined, with a reach that continues to extend beyond the games he covers. And as he lays the foundation and builds an audience for Stephen A’s World, he is also charting out plans for later in his career.

“With my new show, I’m not the only host, I’m also the executive producer,” Smith says. “My production company, Mr. SAS Productions, is now co-producing the show in concert with ESPN, which is a big deal. I plan on being a player in the production industry. I also have aspirations to one day host late-night television. That’s something I’ve always wanted to do, and I’m unapologetic about pursuing those goals sooner than later.”

Regardless of a full plate, Smith remains laser-focused on this pandemic-shortened NBA season. The league is full of question marks, from who emerges from the East, whether the Nets or Lakers will get healthy, and if teams like the Jazz and Sixers can stay atop their respective conferences. Smith brings a sharp dialogue to the game, one unlike any other, as well as a uniquely emphatic approach to expressing himself. This is notably evident—and believable—when he re-engages the Jordan-James debate.

“LeBron is No. 2, directly behind Michael Jordan,” Smith says. “If that’s considered hating, so be it. LeBron does get the nod over Kareem because of the versatility of what he can do on the basketball court.

“I don’t think it’s a crime to name someone the No. 2 player in the history of basketball. If other people want to view it that way, that’s their prerogative, but he’s just not Jordan.”