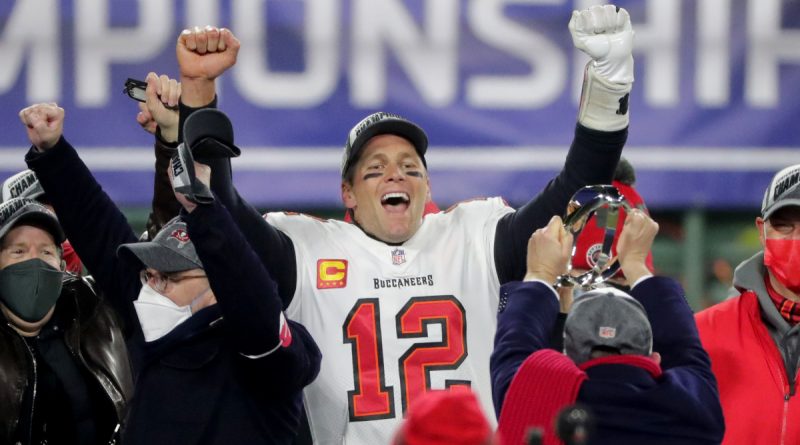 There’s a certain absurdity in a quarterback with six Super Bowl rings adding to his legacy, or even having the room to add to it. When Tom Brady surpassed the four won by Joe Montana—his childhood idol—and Terry Bradshaw, that seemed like the legacy-maker. And then when he added one more to that, certainly that was it.

But even if Brady does not come out of this season with a seventh championship, this year, this bizarre pandemic season, the one when he disorientingly wore a different NFL uniform for the first time in two decades—this might be the one that means the most. The one when Brady joined a team that had not made the playoffs in 13 years, in an offense dissimilar from the system he’d run for the last two decades, without the benefit of an offseason program, paired with a coach not named Bill Belichick—and led that team to the Super Bowl.

Just one year ago, it did not seem real that Brady could leave New England, even though he’d left plenty of bread crumbs indicating his new path. Once he did sign with Tampa Bay, we wondered, could he instantly make this team a real championship contender? After all, how many times had we seen supposed dream teams falter before. Then there was the November slump, when the Bucs lost three games in four weeks, and it seemed like a bat signal went out from Brady’s camp, questioning if Bruce Arians was doing enough to tailor things to the GOAT, or if this would all be a waste.

But those doubts and uncertainties have all now been laid to waste. “It only took one man,” Arians said Sunday evening at the NFC champions’ podium set up on the frigid home field of the foe they had just vanquished, with a 31–26 win over the Packers at Lambeau Field.

When someone makes exceptional feats feel routine, there’s a risk that their achievements aren’t fully appreciated. When the Patriots won six rings in the span of 17 years, and played in three more Super Bowls during that stretch, the perception of just how hard it is to get to a Super Bowl was diminished somewhat—even as we have other benchmarks of that, like Brady’s opponent Sunday, Aaron Rodgers, who won the big game 10 years ago but hasn’t been back since. Or his opponent last week, Drew Brees, who won it the year before Rodgers and similarly never returned. Brady sought a new challenge when he went to Tampa Bay, and in doing so, he also added a new dimension to what he’s achieved in his career. He created a new avenue for his greatness to be fully appreciated.

Arians cited “the belief he gave everyone in this organization that this could be done.” That surely includes players like Mike Evans and Lavonte David, who had never even experienced the postseason before. Rob Gronkowski came out of retirement for Brady, and Leonard Fournette rejuvenated his career. (We will not include Antonio Brown, because the allowances the Bucs organization gave to Brown, despite his record of repeated harmful behavior, as well as Arians’s unacceptable explanation of his reversing course to sign Brown midseason, deserve scrutiny and not praise).

Entering the NFC championship game, Tampa Bay’s 38–10 Week 6 win against Green Bay had felt more and more like a fluke. That was especially true given Rodgers’s brilliant divisional round performance against the top-ranked Rams defense, and Brady’s lackluster showing last week against the Saints, a game largely won by the Bucs defense.

But while Brady looked 43 last week, he came out this Sunday and clinically led the Bucs to a touchdown on their first drive, converting three third-downs in the process. Their second touchdown came after a 52-yard connection to Chris Godwin, notable after a game last week when it felt as though there was a force field preventing passes that might seek to sail 20 yards beyond the line of scrimmage. It really started to feel like Brady’s day in the final seconds of the first half, when the Bucs decided to go for it on fourth-and-four with 13 seconds left, instead of punting, then Brady took a shot to Scotty Miller on the next play. The result was a 39-yard TD.

The Weak-Side Podcast now has its own feed! Subscribe to listen to Jenny Vrentas and Conor Orr every week.

The truth is that both teams, and both quarterbacks, had chances to win a trip to the Super Bowl. Brady made his share of mistakes, and his three interceptions in the second half gave the Packers ample opportunities to surge back, but Rodgers and the offense were not able to take advantage of them. And Packers coach Matt LaFleur’s head-scratching decision to kick a field goal with just over two minutes remaining, trailing by eight, instead of going for it on fourth-and-eight will haunt the state of Wisconsin for months. Or, if Rodgers’s comments after the game about his own future foreshadow another Hall of Famer on the move this offseason, perhaps longer.

So it was Brady holding a conference championship trophy for the 10th time in his career—though his first time with the George Halas Trophy. Everything about this Bucs season has overcome some improbability. Their playoff drought that was the second-longest in the league. Only 10 other wild-card teams have made the Super Bowl since 1970, and a team has never before played a Super Bowl in their home stadium. But the greatest improbability of all is that Tom Brady out-did even his own legacy.