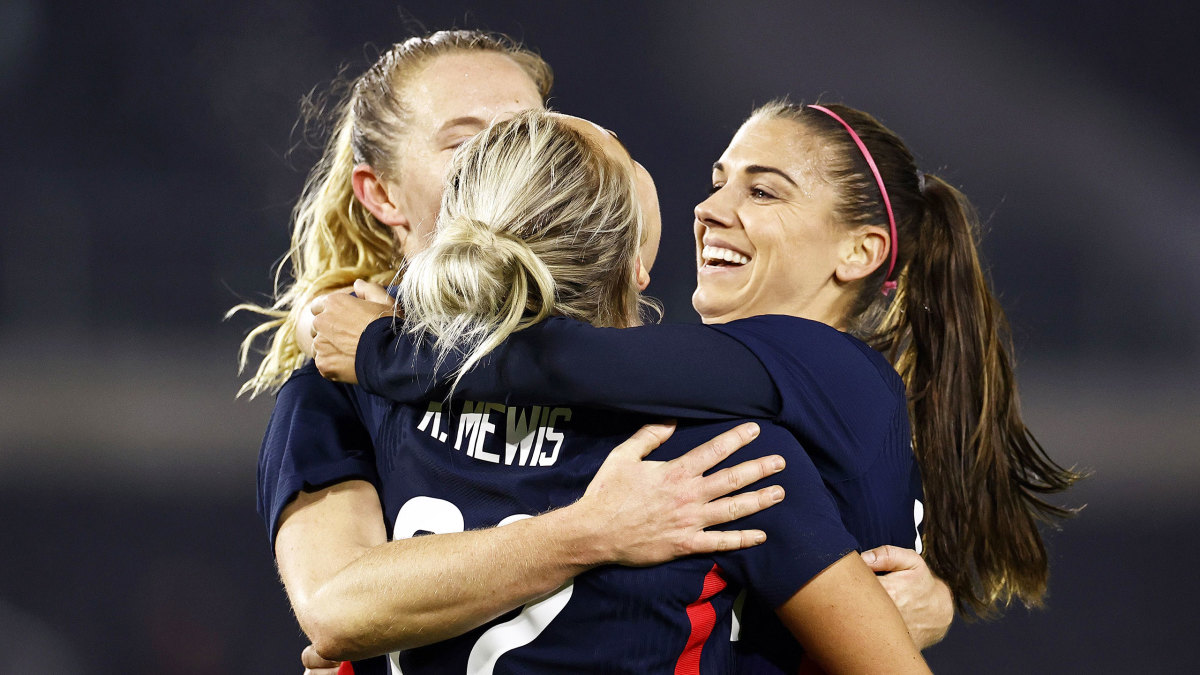 Entering Friday, the last time we saw the U.S. women’s national team in an actual match, it was beating Japan 3–1 to cap off a SheBelieves Cup sweep after staging a silent pregame protest against U.S. Soccer by wearing its warm-ups inside out, hiding the USSF crest.

That was back on March 11—or 261 days ago. When the U.S. players took the field at Rat Verlegh Stadion to take on the Netherlands in a road friendly Friday, carrying the message that Black Lives Matter, it represented the longest gap between USWNT matches in 30 years, per TruMedia’s Paul Carr.

That gap, of course, was a result of the COVID-19 pandemic, which upended women’s soccer along with the rest of the sports world in 2020.

Long-awaited returns ended up being a theme of the day, however, in more ways than one. In the U.S’s 2–0 win over the Netherlands, Alex Morgan made her return to the international pitch after 509 days away—an absence, of course, that was to give birth to her daughter, Charlie—and Kristie Mewis earned her first cap for the U.S. since 2014, scoring her first international goal since 2013 (a span of 2,723 days!).

Coincidentally, Morgan’s last international match had been the 2019 Women’s World Cup final, which also pitted the U.S. with the Netherlands when the USWNT won 2–0 to capture its fourth world title. The 31-year-old striker came off the bench at halftime on Friday after previously returning to the field earlier this month for the WSL’s Tottenham, where she is playing on loan from the NWSL’s Orlando Pride. While Morgan did not score in her 45-minute appearance Friday, she had a goal waived off for a narrow offside call.

Back in the first half, Rose Lavelle got the scoring started for the Americans with a beautiful left-footed finish in the 42nd minute. It’s not the first time the crafty midfielder has tortured the Dutch defense, with the goal evoking memories of her score in the World Cup final that put the finishing touches on the U.S.’s victory and solidified Lavelle as the breakout player of the summer.

In the 61st minute, Kristie Mewis came on for Lavelle (joining her younger sister, Sam Mewis, in the U.S. midfield) after earning a spot on the roster due to her strong 2020 NWSL season, and she wasted little time doubling the U.S.’s lead. Nine minutes into her appearance, she slotted a nifty pass from forward Lynn Williams past Dutch goalkeeper Sari van Veenendaal, then celebrated with Sam.

The two goals were all the offense Vlatko Andonovski’s team would need on a day where the Netherlands—playing without Vivianne Miedema, one of the top global strikers in women’s soccer—struggled to get anything going in the attack. Despite the fact that the U.S. had not played a competitive game together in more than eight months, the team looked sharp after an opening feeling-out period, and outshot the Dutch 14–2. The Netherlands opted to play for possession, out-possessing the U.S. 62% to 38% on the day, but failed to register a single shot on target against goalie Alyssa Naeher, who had a relatively easy day in the back.

In addition to the returns of Morgan and Kristie Mewis, Friday also marked the first international caps for a pair of young U.S. players: Portland Thorns (NWSL) forward Sophia Smith and Florida State midfielder Jaelin Howell, who came in within the match’s final 15 minutes.

Friday’s friendly is set to be the final one of 2020 for the USWNT, which isn’t expected to reconvene until a nearly three-week-long camp in January. The team will then host the annual SheBelieves Cup in February in preparation for next summer’s Olympics in Tokyo.