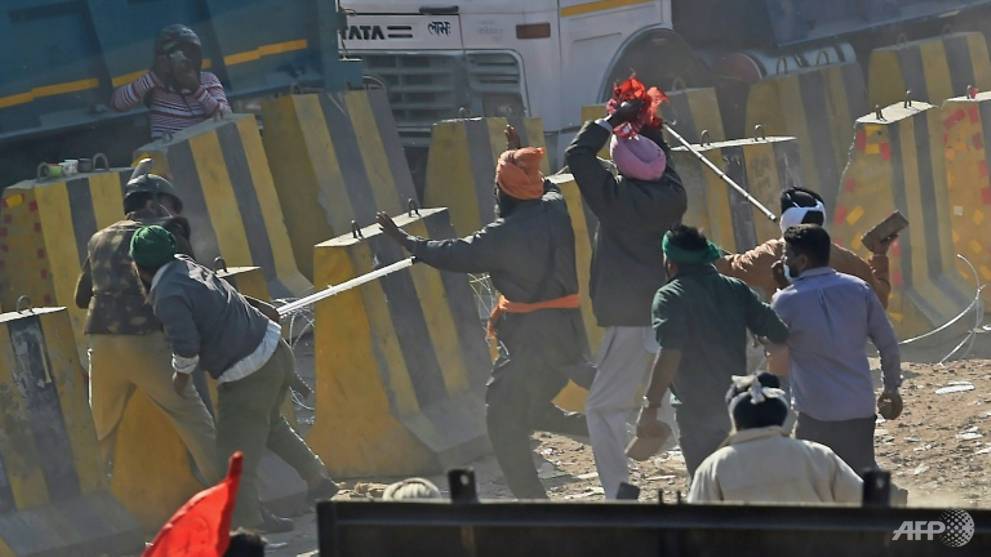 NEW DELHI: New Delhi police agreed to let thousands of Indian farmers stage a peaceful protest inside the capital on Friday (Nov 27) after initially blocking demonstrators on the outskirts and firing tear gas and water cannon at them.

The farmers are angry over new laws deregulating the vast agriculture sector, saying they will leave small growers vulnerable to corporate agri-businesses and could lead to a withdrawal of price supports for staples like wheat and rice.

Protesters from the big farming state of Punjab rode tractors and cars towards Delhi early on Friday morning and were stopped at the city’s fringes by police roadblocks.

Clashes ensued, with police unleashing tear gas and water cannon to push back the farmers. Plumes of smoke rose above the fray and some protesters threw stones at police as thousands pressed against barricades, waving flags and sticks.

“Although the police have tried to stop us with force, barricades and water cannon, we’ve decided to stay the course to make sure the government listens to the voice of millions of farmers,” said protester Sukrampal Dhayana.

Amid criticism over perceived high-handedness of the police, talks were held with farm leaders that yielded a deal to let the protesters rally peacefully in a public ground of the capital.

“(We) appeal to them to maintain peace,” Delhi police said in a statement. It was not immediately clear when the farmer’s rally would be held.

Under the legislation enacted in September that Prime Minister Narendra Modi called a watershed for agriculture, farmers are free to sell their produce anywhere, including to big corporate buyers, instead of at government-regulated wholesale markets where growers are assured of a minimum procurement price.

The government says there is no plan to eliminate wholesale markets and that farmers could sell at these yards as well as to big retailers such as WalMart. It hopes to bring new investment to the farm sector and fix the supply chains that lose one-fourth of India’s produce to wastage.

READ: Commentary: India has liberalised its farm sector. But not everyone is happy with it

The farm sector contributes nearly 15 per cent of India’s US$2.9 trillion economy and employs around half of its 1.3 billion people.

Some 85 per cent of India’s farmers own less than 2 ha of land and lack the means to sell beyond local markets, even if that means forgoing better prices.

The National Farmers’ Forum said that if the government really wanted to improve the condition of farmers, it should plug holes in the minimum price-support programme.