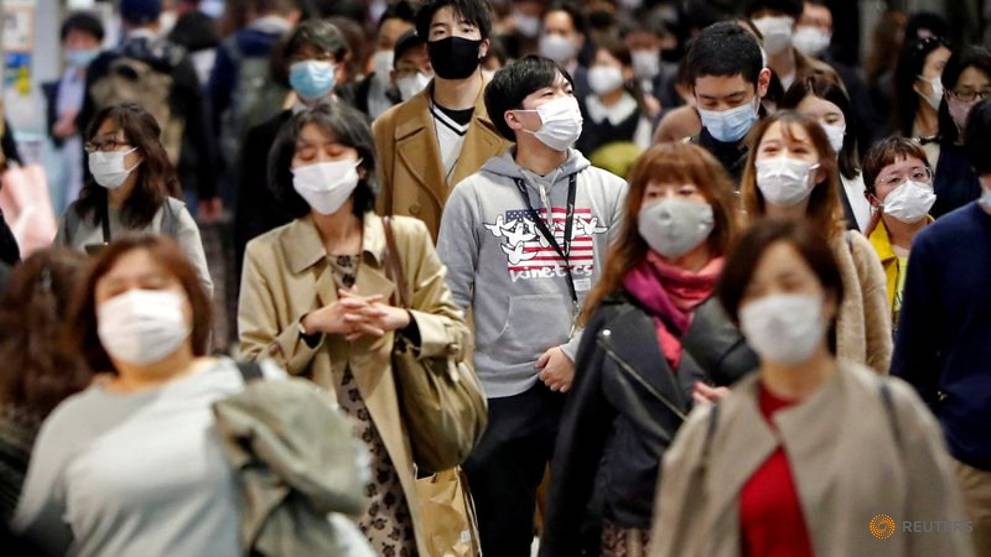 OSAKA: In September, my friend’s grandmother broke her leg.

She was hospitalised for two months. The family could not see her because of the strict COVID-19 measures.

Bad as that was, many families in Japan have faced similar situations with poorer outcomes, for example, hospital patients passing on without seeing their loved ones.

Worse, with Japan’s total case numbers increasing rapidly in recent weeks, there is no clear end in sight for the current situation.

Officials in Japan reported a record 2,596 new cases of COVID-19 on Saturday (Nov 21). On Tuesday (Nov 24), a record 345 people with severe symptoms were being treated with respirators and intensive care.

READ: Commentary: Japan shows how not to deal with a COVID-19 outbreak

East Asia has been upheld as a shining region that has tackled the pandemic with great gusto and huge success.

Most places, like China, Taiwan and Singapore have tried to exterminate the cases domestically. Although South Korea has hit upon a fresh wave of infections, it had kept a lid on the coronavirus for months.

In stark contrast, Japan chose a different path — to co-exist with COVID-19 with some controls in place as it prioritised keeping its economy alive.

In fact, Japan has approached this current, third wave of infections with complacency and nonchalance, thinking its successful handling of the first two waves means it has the wherewithal and experience to manage this smoothly.

After all, when the first wave hit Japan, the Japanese government pre-empted with a sledgehammer nationwide school closure and imposed a state of emergency in April. The government successfully tested, isolated and traced close contacts and controlled clusters.

The second wave in July saw fewer patients with severe symptoms, where new clusters involved young people in their 20s and 30s traced back to night clubs and bars.

READ: Commentary: Why Japan’s move to close schools during COVID-19 outbreak upset many – and not just parents

So how bad can this new wave be? Plus the country has a lot riding on economic recovery, on the back of two domestic leisure campaigns launched since July, the Go To Travel and Go To Eat programmes – to boost Japan’s travel and food industries and quell people’s fears of the pandemic.

To make matters worse, the successful containment of the virus and low death rates has led many Japanese to think there is “Factor X” – a confluence of historical, cultural and social factors protecting the population from COVID-19.

The lack of urgency and sense of crisis, despite an alarming spike in infections, has instead seen many Japanese venturing out of their homes and travelling during the three-day holiday weekend last week.

The current rise in infections, which began in late October, however, is different from the previous waves.

For instance, infections among individuals in their 40s and 50s and transmissions between family members living together or coworkers sharing working space are increasing.

Among infections traced in Tokyo since the beginning of November, the highest proportion of 40 per cent were infections spread at home.

Healthcare professionals are raising alarm bells but these have gone largely unheeded. Head of the Tokyo Medical Association Haruo Ozaki urged the government to halt its Go To Travel campaign during a press conference on Nov 20, highlighting:

If more than 1,000 people a day are infected, our medical institutions will likely not be able to cope.

On the same day, Prime Minister Yoshihide Suga said Japan should be on “maximum alert”, while retaining the Go To programmes on the basis of striking a balance between health and the economy.

READ: Commentary: What the Singapore tourism vouchers are really about

Finally, after coming under heavy criticism, Mr Suga U-turned and suspended the campaign in areas with many cases the very next day on Nov 21 – the first of the three-day weekend.

The policy flipflop suggested the government may have underestimated this third wave  and may have been ill-prepared.

Tellingly, Yasutoshi Nishimura, the minister in charge of Japan’s virus response, said to media on Nov 19, “Only God knows,” when asked about his views on infection projections.

Ironically, Japan also seems equally clueless in finding a way to cushion the economic impact of the pandemic. So far, other than urging people to embrace the Go To programmes, there are few other announced plans to help businesses and those in need.

A TOLL ON PEOPLE

This uncertainty wrought by the coronavirus is taking a toll on the Japanese people.

Suicide cases have risen to 2,153 in October, almost 40 per cent higher than last year, and the highest in more than five years, according to preliminary reports from the National Police Agency.

In fact, suicides in Japan have been continuously increasing for the fourth month in a row since July. In the 10 months of COVID-19, Japan has seen more deaths from suicides than from the pandemic.

Japanese psychiatrist Chiyoko Ueda revealed she had seen the stress caused by COVID-19 among her patients, particularly with some telling her that “my self-esteem is low because I’m worried about money”, as quoted in local media reports.

Despite these implications, the government has not offered substantive assistance packages. Instead, it has asked people to wear masks, to avoid the “three Cs” of closed, crowded and close-contact settings and to avoid conversation during meals, removing masks only for eating and drinking.

LISTEN: The COVID-19 vaccine will be the biggest product launch in history. Can we pull it off?

Osaka, where I live, has recently seen a spike in new daily infections.

A record 490 cases was reported on Sunday, inclusive of 374 unlinked cases.

More worryingly, random testing suggest huge reservoirs of undetected cases, when the seven-day moving average for positive tests in Osaka city is high at 17.5 per cent.

The healthcare system is coming under strain. By Monday, the occupancy rate for beds for patients with severe symptoms had reached 50 per cent or 103 cases.

During the early months of the pandemic, Osaka seemed to have its act together.

Governor Hirofumi Yoshimura announced measures to protect Osaka from the coronavirus, including the start of clinical trials for vaccine candidates, online classes for high schools, and the expansion of testing among the population. Yet none of these efforts have borne fruit.

Instead, Mr Yoshimura digressed and held a political referendum to resolve a non-urgent political issue, asking citizens for support to merge Osaka’s existing 24 districts into four semi-autonomous wards in early November, whereas he should have focused on dealing with the pandemic.

READ: Commentary: Why the Oxford AstraZeneca COVID-19 vaccine is a global game-changer

Condemned by many for not curbing the infections in these areas, the government took the stop-gap measure of excluding Sapporo and Osaka city from Go To Travel programme for three weeks starting Tuesday (Nov 24) instead of doubling down on restrictions there to stem the spread.

TOO LITTLE TOO LATE?

Now, Osaka is asking about 25,000 restaurants and bars to close at 9pm or earlier for 15 days starting Friday (Nov 27). Governor Yoshimura has said he “aims to prevent the spread of infections in entertainment districts somehow.”

Yet, those measures may not be enough to contain the third wave of infections.

Unlike the beginning of the second wave, only 10 per cent of total traceable cases are connected to restaurants and bars so shortening their operating hours may have limited effects on curbing the pandemic.

Moreover, although the Go To Travel programme excludes Osaka city as a destination, Osaka city citizens are still able to travel to other areas in Japan.

If Japan is to successfully deal with this new wave of COVID-19, then its people and government must change their mindsets and discard any complacency arising from their successful experiences of the first and second waves.

And it starts with this: Prioritise dealing with this third wave above everything else now.

No one should have the misguided thinking that Japan has arrived as a nation battling COVID-19; far from it.

It is time to wake up, face the realities of Japan’s current situation and take action.

Yuka Hasegawa is a researcher who writes on social issues and politics in Japan.