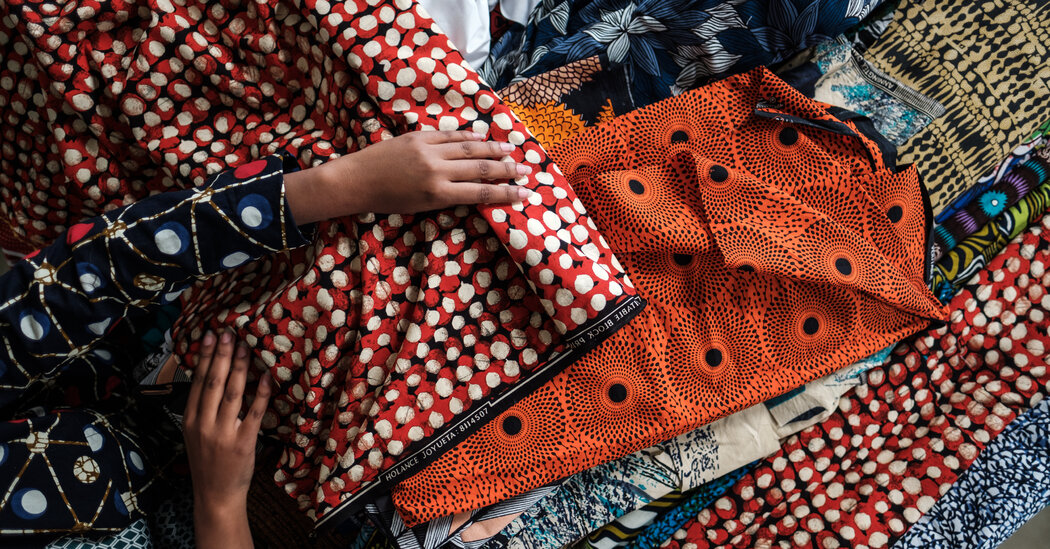 Not far from Addis Ababa’s British Embassy, in a quiet residential enclave just off a busy thoroughfare, stands a lovely tree-shaded villa. It’s here that Anna Getaneh opened her boutique, African Mosaique, almost four years ago, in a home her father had built and where she spent some of her childhood years.

Past the garage — now a coffee shop — and the foyer are erstwhile living and dining areas: airy showrooms for a gallery-worthy display of Ms. Getaneh’s diaphanous dresses, patterned blazers and colorful accessories, which incorporate traditional Ethiopian fabrics and craftsmanship, filtered through Ms. Getaneh’s global lens.

“My starting point is textiles,” she said. “I grew up appreciating fabrics, and what kind of colors and what kind of motifs are worn, and their significance. I always felt that these are such great stories to share and tell.”

Many of the designs on display incorporate shema, an Ethiopian handwoven fabric, and kitenge, the African wax print fabric popular across much of the continent. For example, a brightly colored long dress made of kitenge is priced at 4,500 Ethiopian birr, or about $120, while a white shema woven dress is 3,000 birr, or about $80.

But the fabric is merely a starting point. “I love being able to use basic fabrics and adding value; we do embroidery, we do beading, which is really what our story is here in Africa,” Ms. Getaneh said. “You hear about artisanal work in the rest of the world, and that’s luxury — couture is all handmade, for example. Whereas here, that value has never been a given.”

The boutique’s international sensibility makes sense, given that African Mosaique’s origins are many miles and many years removed from its current setting in Ethiopia’s capital.

The daughter of a career diplomat and a fashion designer, Ms. Getaneh was born and raised overseas; as a model, she spent nine years working in Paris and New York. It was in New York that she founded the Ethiopian Children’s Fund to build schools in rural Ethiopia, which led to the 1996 opening of a fund-raising fashion showcase she named African Mosaique.

“I wanted to do something different. I didn’t want to show images of dying children, of problems, of war and all the turmoil that we have in Africa,” she said. “I wanted to put the spotlight on something positive.”

In the 1990s, the New York iteration of African Mosaique brought together talent from across the continent with Pan-African collectives timed to the end of Paris and New York fashion weeks.

“Initially, it was all about showing that there is fashion in Africa, it was well alive and thriving, and that the only thing is that we didn’t really hear about it in the West,” she said.

Eventually, she returned to Africa — first to Johannesburg, where she opened an African Mosaique boutique in 2005, and then, in 2012, to Addis Ababa, where her brand has grown into a multidimensional force celebrating local materials and workmanship: the boutique, her own in-house label, an annual fashion festival (coming up on Dec. 5), a design hub and a fashion incubator to support up-and-coming talent.

It’s the incubator that Ms. Getaneh is particularly proud of, a program designed to help emerging designers on every stage of launching a fashion brand — from skills to production to business plans and beyond.

“With the right opportunity, you can start seeing designers succeed in Africa,” she said. Fifty designers have participated so far, and Ms. Getaneh hopes to roll out the program across the continent to empower future generations of African talent with tools to thrive.

“We’re focusing on what are the challenges designers have here, because it’s very similar to what designers in South Africa or West Africa have: lack of proper design schooling, lack of machinery, lack of raw material — even though we have great cotton and leather, most of it is exported.”

Ms. Getaneh’s next project is a foundation scheduled to open in January and focused on sustaining traditions.

Her goal, she said, is “making sure that as we grow the fashion design we’re not forgetting our past.”