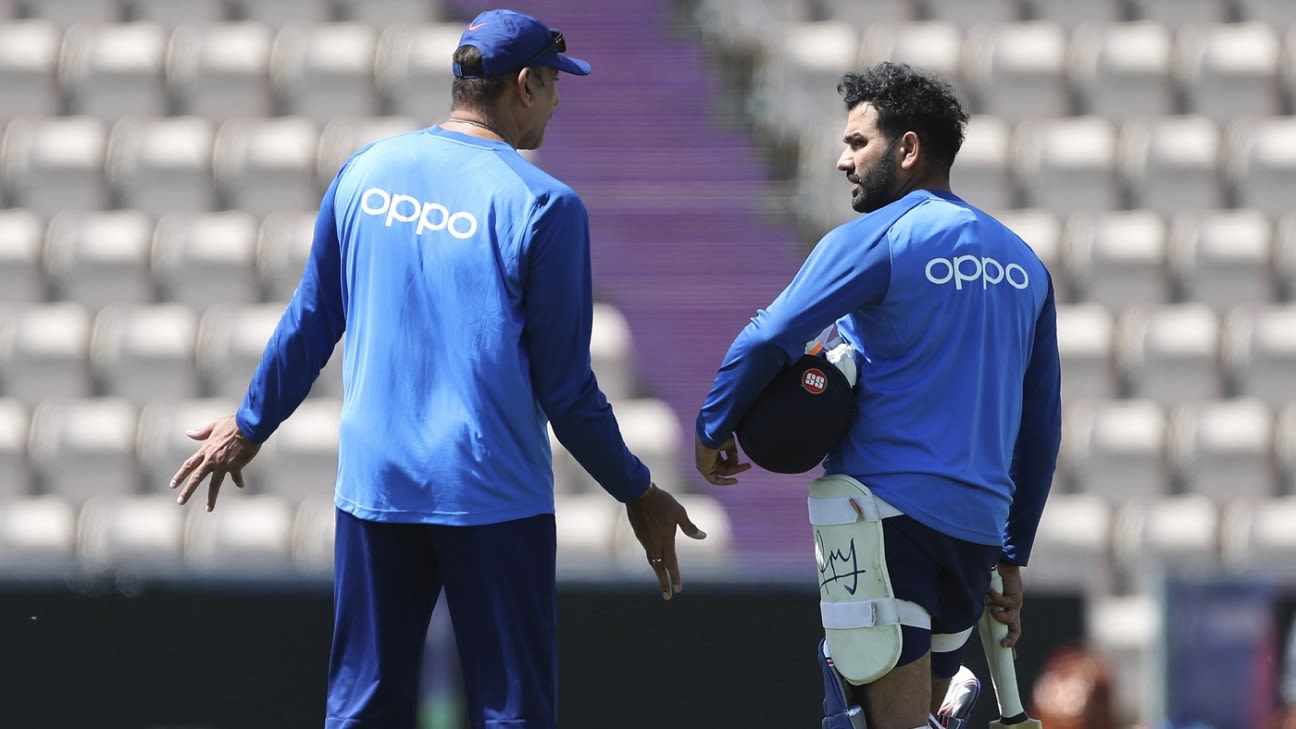 For Rohit Sharma and Ishant Sharma to feature in India’s Test series against Australia, they’ll have to fly out to the country in less than a week, according to India coach Ravi Shastri. Both Rohit and Ishant are at the NCA in Bengaluru at present, undergoing strengthening and rehab as they work their way back to full fitness after injuries sustained in IPL 2020.

“He’s going through some tests at the NCA and they’re obviously going to decide [for] how long he needs to take a break,” Shastri said of Rohit, speaking to ABC Sport. “But things could get difficult if he’s asked to wait for too long, [because] then you’re talking of the quarantine again, which might make it really tough for even him to come just in time for the Test series.”

A 14-day quarantine is currently mandated in Australia due to Covid-19. The first Test, a day-night pink-ball affair at Adelaide, starts on December 17, but India are also slated to play a three-day warm-up match on December 11 before that. For Ishant and Rohit to be out of quarantine by December 10, they would have to land in Australia on November 26.

“He was never going to play the white-ball series, they were just looking to see how long he needed the rest, because you can’t afford to be resting for too long,” Shastri said on Rohit not being part of the limited-overs squads. “If you need to play in the Test series or any red-ball cricket, you’ve got to be on the flight in the next three or four days. If you aren’t, then it’s going to be tough.”

Rohit had also stated he didn’t opt for the white-ball leg of the Australia tour due to the packed schedule, but that his hamstring was “feeling absolutely fine” at the NCA. Ishant, who has already begun bowling for longish stints off a full run-up, is also slated to join the Indian team if his recovery is complete.

“It’s a similar case to Rohit,” Shastri said. “You don’t really know how quickly he’ll be available to fly out. Like I said, if anyone has to play in the Test series, he has to be on the flight in the next four or five days. Otherwise, it’s very difficult.”

“If you see where India have gone in the last five-six years, there’s no doubt in absolutely anyone’s mind that he’s the driving force and the man behind it .”

The other challenge India will have to deal with in the Tests is that Virat Kohli will only be available for the first game of the four-match series. He will then fly back for the birth of his first child, a decision that Shastri said was the right one. While admitting that the team would miss its ‘driving force’, Shastri said it opened up an opportunity for someone else too.

“I think it’s the right decision he’s taking,” Shastri said. “These moments don’t come time and time again. He has the opportunity, he’s going back, and I think he’ll be happier for that.

“If you see where India have gone in the last five-six years, there’s no doubt in absolutely anyone’s mind that he’s the driving force and the man behind it (India’s success). So he obviously would be missed. But like I say, in adversity comes opportunity. There are lot of young guys in the side and it’s an opportunity for them.”

Looking ahead at the pink-ball Test match, Shastri acknowledged that Australia were considerably more experienced, having played seven day-night Tests and won each one. India have played only one game, against Bangladesh, and won that. “We had one good experience playing against Bangladesh, but obviously the quality – Australia, Bangladesh – chalk and cheese. It’s still a learning curve as far as our team is concerned,” Shastri said.

While in quarantine, the Indian team have still managed to practice inside their bubble. The freedom to do that and not be confined to hotel rooms for a fortnight was an important factor behind the tour materialising, according to Shastri.

“I think that was the clincher. If it was hard quarantine, I would have found it hard for a full tour to go on,” he said. “That’s for sure. Once they said it was soft quarantine and the boys could practice, that made things a lot easier.

“Luckily, a lot of the boys played in the IPL – as would have a lot of the Australians – so that would have kick-started them over the last month and a half. So are far as match fitness goes, they are pretty much there.”