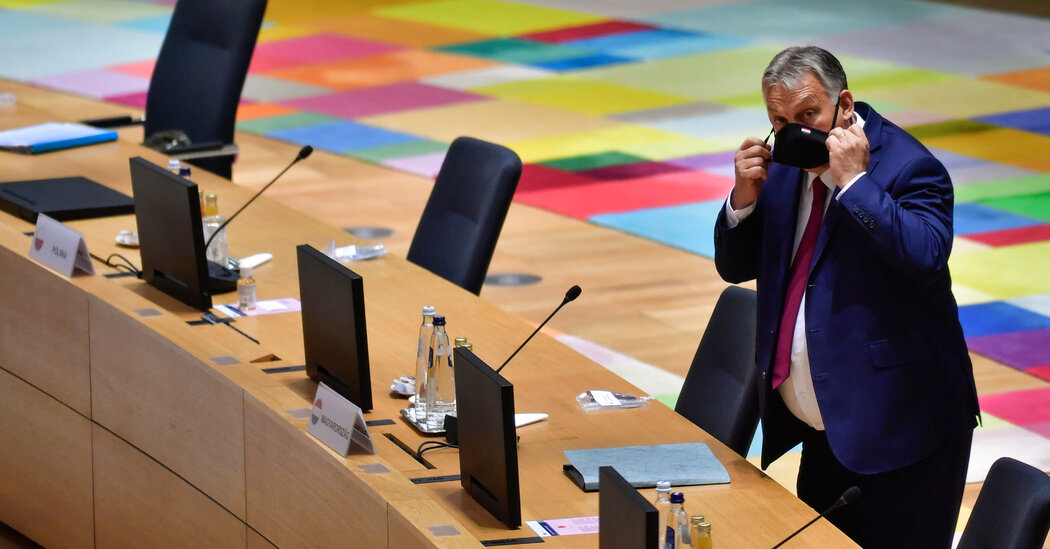 BRUSSELS — When European Union leaders announced a landmark stimulus package to rescue their economies from the ravages of the coronavirus, they agreed to jointly raise hundreds of billions of dollars to use as aid — a bold and widely welcomed leap in collaboration never attempted in the bloc’s history.

But that unity was shattered on Monday when Hungary and Poland blocked the stimulus plan and the broader budget, cracking open one of the bloc’s most persistent, existential divisions over what a European Union democracy looks like.

The two eastern European countries said they would veto the spending bill because the funding was made conditional on upholding rule-of-law standards, such as an independent judiciary, which the two governments have weakened as they defiantly tear down separation of powers at home.

Their veto has thrown a signature achievement of the bloc into disarray, deepening a long-building standoff over its core principles and threatening to delay the stimulus money from getting to E.U. member states, if a new agreement can be reached at all.

Many E.U. nations are currently in the grips of a new round of nationwide lockdowns as a second wave of the virus has sent cases soaring in some places to levels rivaling the scourge last spring, inundating hospitals, shuttering businesses and leaving countries desperate to get their economies revitalized.

The show of force by Prime Minister Viktor Orban of Hungary and, to a lesser degree his Polish counterpart, Mateusz Morawiecki, was the most prominent display yet of how the two members are now able to hold the bloc hostage on a major issue like protecting democratic values — and the E.U.’s relative powerlessness to stop them.

Mr. Orban has been emboldened by the tolerance of fellow European Union leaders, the impotence of the E.U. institutions to hold his government to account for violations of E.U. laws and standards, and the cover that President Trump, a close ally, has offered over the past four years, elevating both his policies and rhetoric on the global stage.

At an E.U. ambassadors’ meeting on Monday, the two eastern European governments effectively blocked the stimulus and budget package, sending shock-waves through the policymaking machine in Brussels and officials scrambling back to the drawing board to rescue the budget quickly.

E.U. leaders will now attempt to break the stalemate at a teleconference on Thursday, but it was not clear whether that would lead to a diluted version of the offending language to appease Hungary and Poland, or to further negotiations with the two countries and the European Parliament.

The 1.8 trillion euro, or $2.1 trillion, multiyear budget at stake contains at least 750 billion euros aimed at helping members’ economies out of the catastrophic recession unleashed by the coronavirus pandemic. Agreed upon in July after tough negotiations among national governments, the new budget was the first time that the E.U. had agreed to jointly issue debt and amounted to a groundbreaking change in the bloc’s willingness to mobilize resources collectively in a time of crisis.

But at the insistence of the European Parliament, which must approve spending, the budget bill passed earlier this month included language making the funds contingent on rule of law standards that the E.U. considers fundamental to its values. The item was clearly aimed at the Hungarian and Polish governments, which have defiantly chipped away at independent judiciaries among other democratic norms.

Hungary in particular has also resisted greater transparency in how Mr. Orban’s government spends E.U. subsidies, at times steering funds toward political allies in an environment of cronyism.

Both Hungary and Poland, undemocratic outliers, have enormous leverage because elements of the stimulus and budget package must receive the unanimous approval of member states.

Hungary and Poland, conversely, say it is the E.U. bureaucracy that is trying to coerce them.

“Without objective criteria, based on ideology, they want to blackmail countries without providing them legal remedy,” Mr. Orban said in an interview Friday criticizing the budget and stimulus bill. “This is not what we wanted. This is not why we created the European Union, so that there would be a second Soviet Union,” he added.

A delay in the bill beyond the end of November would push the deployment of the funding back into the new year, and would hurt the E.U. deeply. As the pandemic drags on, the bloc’s economy is sinking deeper into recession and national stimulus programs are rapidly depleting.

“When we have millions of E.U. citizens and businesses that need an E.U. lifeline and are on the brink of bankruptcy, to use this blackmail so they can throw out judges they don’t like and stuff money in their pockets, it’s the least solidarity-based action I’ve seen in the E.U.,” said Daniel Freund, a member of the European Parliament who participated in the stimulus and budget negotiations.

Hungary and Poland have long been in the European Commission’s cross hairs for such violations. They are the only two countries in the history of the E.U. to have been investigated by the Commission, the bloc’s executive arm, under the so-called Article 7 of its treaty, which allows for the suspension of a member state’s voting rights if it is found to be repeatedly violating fundamental E.U. values.

But the efforts to hold the two governments accountable have failed: ultimately, suspending one member’s voting rights would require a unanimous vote by the rest, and Poland and Hungary would always veto each other’s punishment.

In its first ever Rule of Law Report for Hungary in September, the European Commission noted the bloc’s yearslong concern over judicial independence, the “systemic lack of determined action to investigate corruption cases involving high-level officials or their immediate circle,” steps taken to curb media freedom, and attacks on civil society.

Responding to the report’s findings, Mr. Orban’s government circulated a document in Brussels, categorically rejecting the concerns raised by the Commission, adding that the report denied Hungary the right to a fair hearing.

European Commission officials lament the limits of the legal tools they have to force Hungary and Poland to change course. But experts have also been critical of European Union leaders, including Chancellor Angela Merkel of Germany, for enabling Mr. Orban’s behavior.

Ms. Merkel, whose country now holds the E.U.’s rotating presidency and shepherded the stimulus deal, was originally against the idea of tying E.U. funds to the rule-of-law mechanism as she and other E.U. leaders have shied away from opening more rifts that could further compromise the bloc in the aftermath of Britain’s departure.

“This veto demonstrates the dangers, or the cost, to the E.U. of not having stood up to these regimes earlier,” said R. Daniel Kelemen, professor of political science and law at Rutgers University.

“Now that they are consolidated autocracies, they can try to hold the E.U. hostage to keep their money coming,” he said.

Concerns over Mr. Orban’s authoritarianism have grown during the pandemic. He has used the crisis to continue consolidating power, and Hungary’s parliament extended Mr. Orban’s sweeping executive powers to combat the surge in coronavirus cases.

But critics charge that Mr. Orban has used his expanded authority to pursue measures that have nothing to do with the pandemic, like his desire to perpetuate a culture war against the L.G.B.T.Q. community.

Last week his government pushed forward with a sudden barrage of bills that, if adopted, would restrict marriage as an institution between a man and a woman and make it much more difficult for gay couples to adopt children. Some would also change election laws to strengthen Mr. Orban’s prospects to retain power and tweak the legal definition of public funds to obfuscate suspected cases of corruption.

Mr. Orban’s ascent to European culture warrior has also been bolstered by his close links to President Trump, whose defeat by Joseph R. Biden Jr. in the U.S. presidential election may now provide the E.U. with new chance to rein in the Hungarian leader, said Veronica Anghel, a Political Science Fellow at Johns Hopkins School of Advanced International Studies and at the Europe Union Institute.

“Having the U.S. back as an ally will give the E.U. another push to be less complacent with what’s happening in Eastern Europe,” Ms. Anghel said. “Biden is very interested in making democracy a theme in his agenda, and it’s likely he will look more closely at troublemakers in Eastern Europe.”