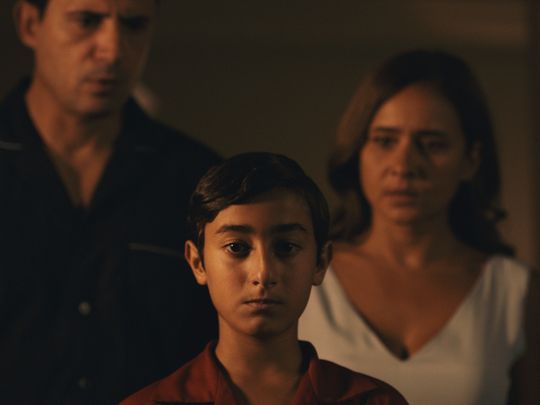 Getting ready for Halloween with your favourite scary movies? Why not add a brand new Arab film to the list? Shahid VIP premieres ‘Bloodline’ — the first ever vampire horror movie in the region — on October 30. Starring A-list celebrities Dhafer L’Abdine and Nelly Karim, the film (and its chilling trailer) already has everyone talking. We break down everything you need to know about the ground-breaking supernatural thriller ahead of its release.

Lima (Nelly Karim) and Nader (Dhafer L’Abdine), parents of young twin brothers, find themselves in the middle of a hopeless situation. One of their boys, Malik, is left for dead after an accident and slips into a coma.

In a desperate attempt to keep their son alive, the parents must resort to unusual methods. But everything begins to unravel once Malik awakens from his coma and begins to exhibit disturbing behaviours and sinister intentions.

The story follows one of the creepiest elements in any horror movie — twins!

Twins (and the idea of an ‘evil twin’) have long been a staple of the horror movie genre. The most famous example is Stephen King’s ‘The Shining’ in 1980, but twins have shown up time and again in spooky movies.

‘Bloodline’, one of the first big-name horror films in the region, will follow that tradition, as it features twin boys torn apart by this accident.

“Malik came to my room and wanted to play with me,” says his brother in the trailer, appearing to wake up from a nightmare. “But then he changed. I think he wanted to hurt me.”

‘Bloodline’ is being touted as the first ever vampire horror film in the region.

Stories about vampiric creatures have been circulating for centuries. The first iteration of the bloodsucking vampire, as we know it today, appeared in early 18th century folklore in Transylvania (central Romania).

Vampires have become a popular figure in contemporary Western cinema, from ’Nosferatu’ in 1922 to ‘Twilight’ in 2008.

“As a fan of vampire stories and films, ‘Bloodline’ has been a dream project for me for many years,” says writer-director Rami Yasin. “The story is one of a kind in the world of Arab cinema, and I was excited by the challenge of creating the first Arab vampire film. I hope I was able to leave my mark on it.”

The film stars Tunisian actor Dhafer L’Abdine and Egyptian actress Nelly Karim, who previously acted opposite each other in the critically acclaimed TV series ‘Taht Al Saytara’ (‘Under Control’). This will be their first film together. But, their prior experience helped them build easy chemistry.

Dhafer L’Abdine: ‘I was excited to be a part of this’

L’Abdine, known for challenging himself, plays an Egyptian father, who will go to extreme lengths to keep his family together.

“I was excited to be part of ‘Bloodline’ because the role is new. It’s the first Arab vampire film. I’m really happy with the experience,” said the actor. “The connection between [Nelly Karim and I] in the film was easy, because we both known how the other works. That’s reflected in our performance and the audience will be able to feel it.”

L’Abdine was also happy that the film would drop on a streaming platform, making it instantly available to subscribers at home. “These kinds of platforms are important because they deliver movies to people’s homes, everywhere. The movie’s reach will be wider around the Arab world. Also, people can watch it wherever they choose to.”

Karim, who’s known for excelling in her dramatic performances, comes back to the big screen as a mother in despair, torn between losing her son or keeping him close, in a terrifying way.

“It’s great to be part of an excellent project, which brought me back together again with Dhafer L’Abdine, in our first feature film,” said Karim.

“I’m confident that the viewers will be blown away with the story of the film, and they will be impressed with the unconventional roles we play. The film is unique, because it’s the first of its kind in our region, and I’m looking forward to the reactions of the audience once it premieres.”

“What made this a successful project was working with capable stars, on the level of Nelly and Dhafer, as well as the incredible crew and a special cast,” said Yasin.

“That’s what made it possible for me to translate my cinematic vision into a reality. I hope that ‘Bloodline’ leaves a good impression on the audience, not just in the region, but all over the world.”

Lebanese filmmaker Yasin, whose short film ‘Overtime’ screened at the 2014 Venice Film Festival, previously produced Emirati thriller films such as ‘The Worthy’ and ‘Zinzana’. However, this is the first feature film he directs.

“Rami has a unique ability and working with him on his first ever feature film, which was written by him, was really enjoyable,” said Mohammed Hefzy, founder of production house Film Clinic.

In addition, at a time when cinema shutdowns have plagued the industry, being able to watch the film at home will be a big plus for audiences.

“It’s a testament to this film that Shahid VIP will stream it during these unprecedented for the film and entertainment industry, both in the region and around the world,” added Hefzy. “And I’m confident that this is going to be in best interest of the audience, who will be able to enjoy the film on [the streaming platform].”

We first heard about ‘Bloodline’ last year, as part of a bigger announcement about a landmark partnership between Image Nation Abu Dhabi, Majid Al Futtaim and MBC Studios. This is the first completed project under the partnership, which aims to grow the industry and support projects “from inception to distribution.”

In an initial announcement, the partnership’s focus was said to be on Saudi Arabia, the UAE and Egypt. The “vampire family drama”, however, was titled Three Four Eternity’ at the time.

‘Bloodline’ will be available to stream on Shahid VIP from October 30.