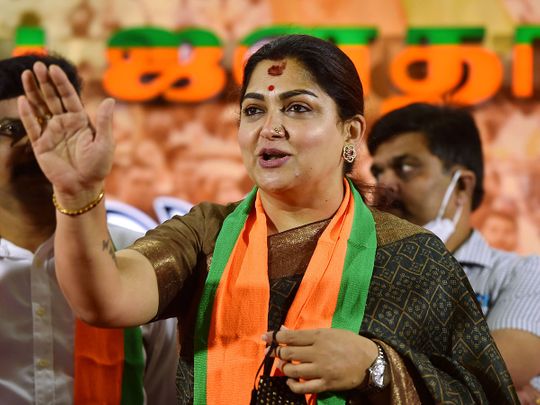 Actor-turned-politician Khushbu Sundar who recently jumped boat from Congress to BJP was arrested on Tuesday by the police near Muttukkadu while she was on her way to Chidambaram to participate in a protest rally.

Khushbu was nabbed while she was on her way to participate in the protest, which did not get police permission.

“When your journey is cut short by force, you know you are on right track. I question @AIADMKOfficial n #CM of TN @EPSTamilNadu avl, why we are denied our democratic right for a peaceful protest when other parties are given the permission to do the same? Why this partiality (sic)?” Khushbu tweeted.

“Or is @AIADMKOfficial govt aware that #VCK is capable of riots and goondaism and they fear the same?” she added. Tamil Nadu BJP Women’s wing has organised a state-wide protest against Thirumavalavan on Tuesday.

She further tweeted, “Cowards #VCK. Dont rejoice. Its your failure. Arrested bcoz they know we are a force to reckon with. We will not bow down. @BJP4India @narendramodi Ji shall take every step to ensure the respectability of every daughter of this soil.Darpoks VCK, respecting a woman is alien to you”.