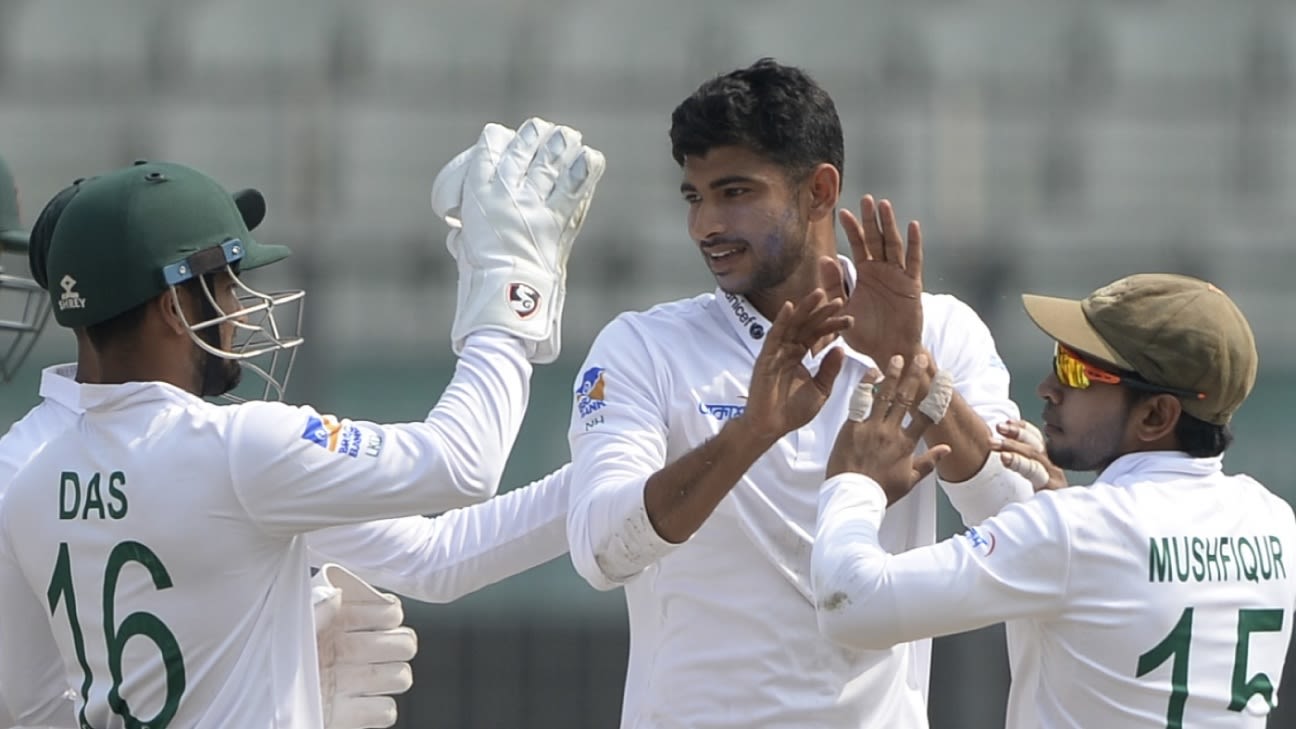 Bangladesh’s spin-bowling coach Daniel Vettori foresees a bright future for the spin trio of Nayeem Hasan, Taijul Islam and Mehidy Hasan, being especially impressed with young offspinner Nayeem continuing on his improvement from the last 12 months.

The 20-year old Nayeem took a match haul of nine wickets in Bangladesh’s last Test match against Zimbabwe before the Covid-19 pandemic broke out, and even after the enforced break, he has been on target in the two-day and one-day practice matches this month.

Nayeem was preferred to the more experienced Mehidy in the only Test against Zimbabwe in February, with the team management looking for a spinner who could extract spin out of a docile wicket in the early stages of the match.

Vettori, who has a series-by-series contract with the BCB and is currently in New Zealand, said that Nayeem’s variations and willingness to impart spin on the ball gives him an advantage against batsman.

“Nayeem has been awesome, really impressive,” Vettori told ESPNcricinfo. “He spins the ball, he has amazing variations and he has an amazing top spin on the ball. It is crucial. You look at what Nathan Lyon has done as a right-arm offspinner. Nayeem can look up to him and see how he releases the ball.

“Like all the other spinners, Nayeem works hard. I think he has a really big future as an allrounder as well – in all formats. He is a guy to keep an eye on. The last time we played cricket was in that Test match [against Zimbabwe] and he did so well. So hopefully he gets more and more opportunities. Him, Taijul and [Mehidy Hasan] Miraz can combine to be a pretty formidable trio.”

Vettori believes that Mehidy too has all-round potential, but the offspinner – who is regularly picked in Tests and ODIs – must find a balance between the two formats, especially in different conditions.

“[He can keep improving] for the same reasons that he worked so hard [for]. He has a real desire to get better and better. He again has to balance up playing Tests and one-day cricket. It is not always easy to change back and forth from conditions in Bangladesh to overseas conditions. He has the most potential as an allrounder with his batting and fielding, which is the way he can contribute for Bangladesh,” Vettori said.

He, however, concedes that Bangladesh’s spinners have already started adapting to the slightly changed home conditions. Against Zimbabwe this year, it wasn’t a Mirpur rank-turner that immediately greeted the visitors unlike the ones faced by England, Australia, Sri Lanka and Afghanistan over the last few years. After criticism about the type of pitches prepared for Test matches, the team management has vowed to have pace bowlers in their plans for home Tests. It wasn’t a green belter against Zimbabwe either, but Ebadat Hossain and Abu Jayed bowled 41 overs together in the first innings.

“I think like all good spinners, they have adapted to the conditions. The conditions in Bangladesh have been conducive to bowling fast, side-spin into the deck because the wickets gave them so much advantage. But now the wickets have changed. Mirpur is a lot flatter. The spinners have to change with that, and you saw that with Nayeem and Taijul in that Test match against Zimbabwe.

“They are learning to bowl a different style and learning bowl on a first innings pitch. Then as the wicket deteriorates, then to bowl on a second innings pitch. You will see them improve more and more as the opportunities come. All good spinners bowl to the conditions. That’s what Taijul did so well for such a long time, which is why he has such a good record. Now that those conditions are changing, they have to adapt with them, and they are willing to do that,” Vettori said.

But more often than not, it is Taijul’s lop-sided Test record that comes under the spotlight each time Bangladesh’s home strategy is considered. He has taken 93 of his 114 wickets at home, with a difference of 32.94 in bowling average and 47.8 in strike-rate when to compared to bowling outside Bangladesh.

Off late, though, he has modified his bowling action, which he said last month was to give him a better chance to bowl in different conditions and across all three formats. Vettori, who said that he wasn’t aware of his change in action until notified by this correspondent, believes the subtle changes will help him bowl well abroad.

“I think it was all Taijul,” Vettori said. “When you sent that question through, I actually went out and looked and you’re right, it has changed a bit. I think the big thing for Taijul is that he wanted to be a bowler in all conditions. I think we have all seen how fantastic his record in Bangladesh. He gets most of that through his side-spin, pace and his ability to turn the ball.

“He initiated the ability to bowl a bit more of a top-spinner and that brings in his drift and a lot more variations that will help him outside Bangladesh and try to complement it still with his ability to turn the ball. It is something that he is good at, but those subtle variations will help him overseas.”

But there’s some concern whether Taijul may have trouble adjusting to a new action after having bowled with one for six years in international cricket. However, Vettori said that Taijul seems to have adjusted to it already and is fully aware of what he is doing.

“I hadn’t really noticed it, so I think it’s been quite natural for him. He will be able to answer better than me, but I think it’s been something that he has taken on and has come quite easily to him. I think he is drifting the ball more, and getting that seam position where he wants to be, still while being able to get back to how he used to bowl in those conditions.

“I think its commitment from Taijul that he wants to be successful playing all formats around the world. Between the two of us, this is one of the ways we have identified that he can do it,” he said.

Vettori is also hopeful that Bangladesh can have a legspinner in the mix in the near future. He worked closely with Aminul Islam, and was impressed by how he converted himself from being a batsman and into a legspinner within just a few weeks. Aminul has played seven T20Is for Bangladesh and remains in contention for the selectors, who are keen to pick him for the shorter formats.

“Aminul Islam played some T20 cricket and once again, he impressed me as well. I think he is another hard worker. A guy with very good variations and learning the art form. Legspin takes so long and he has come from a batting position to bowling not too bad. From not having a googly to having a really good googly – just learning his craft.

“I think the rapid improvement bodes well for him to continue to be successful. Once you have one or two of those guys playing for the national team, it will only encourage others to bowl as well. I know [head coach] Russell [Domingo] is a huge fan of legspin and what legspin has done in limited overs cricket especially. The three spinners I mentioned previously and Biplob (Aminul) as well, it’s pretty good stock for Bangladesh to have,” said Vettori.