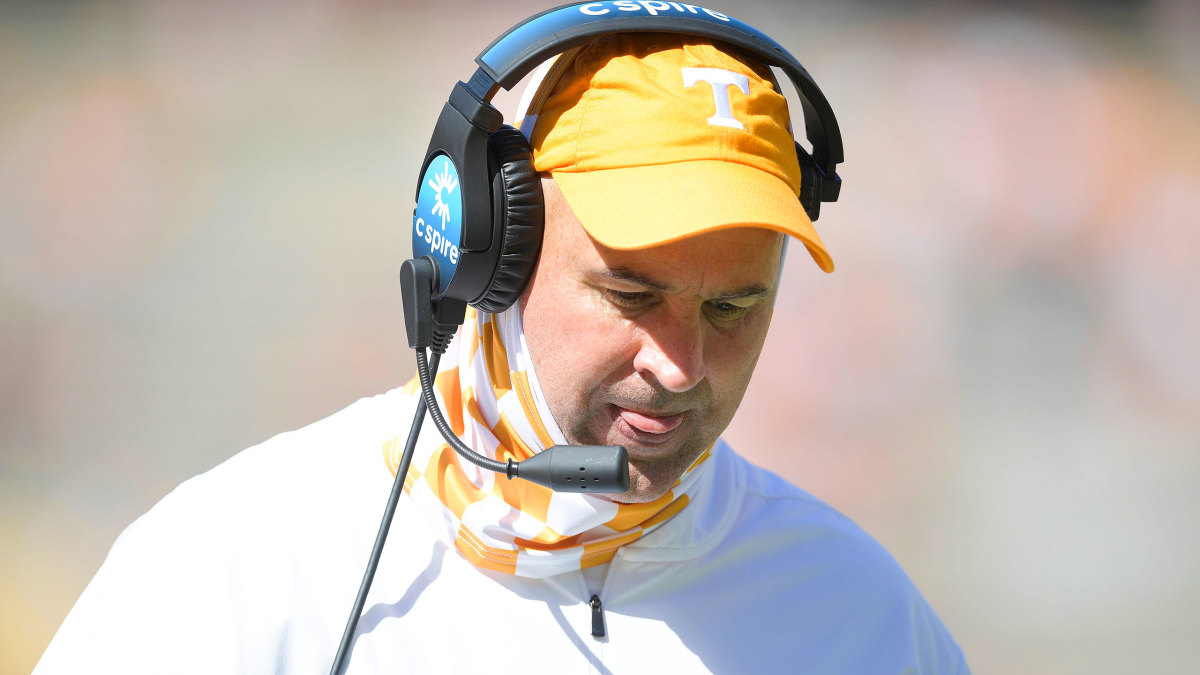 How bad was Tennessee (11) Saturday? Bad enough to lose to Kentucky by 27 points, which is its largest margin of defeat against the Wildcats since a 27–0 loss in … 1935. Last time the Volunteers lost by more than 27 to Kentucky was the first time the teams ever met, in 1893. So you could say this was a once-a-century calamity for Big Orange, but that would actually be understating it.

This was an outcome so galling that it led one Vols fan to throw a beer bottle through a window. Said fan felt compelled to call in to a postgame radio show and report his meltdown, adding that his wife left the house over it. “Honey, Tennessee football done it,” the man said he told his wife. “I didn’t do it.”

That’s questionable accountability, but the beer bottle bomber isn’t alone. Head coach Jeremy Pruitt (12) also found someone other than himself to blame, firing defensive line coach Jimmy Brumbaugh on Sunday. Brumbaugh was the scapegoat after all of four games at Tennessee, and no spring practice with his unit. (Tennessee fans had already started the Must Be Fired list, and Brumbaugh wasn’t at the top of it.) The firing will cost the athletic program $830,000, according to the Knoxville News-Sentinel, though that could be mitigated if Brumbaugh gets another job.

Throwing around money is what Power 5 athletic programs do, though, and Tennessee is among the industry leaders in that area. Less than a month ago, athletic director and former coach Phillip Fulmer (13) announced a contract extension for Pruitt through 2025 that will increase his salary to $4.2 million next year. Per the release announcing the extension, Pruitt was credited with “establishing a culture of toughness, a bowl appearance following a six-game winning streak and a top-10 recruiting class.”

(According to USA Today’s coaching salary database, Pruitt has not taken a pandemic-related pay cut in 2020. Many of his peers at public universities have. Given that, plus Pruitt’s comical inability to wear a mask correctly against Georgia, this might not be a guy who is taking the COVID-19 situation too seriously.)

At the time of the extension, Pruitt’s record was 13–12. There is no reason to believe anyone was preparing to poach him. Today his record is 15–14, with a 2–0 start followed by humbling losses to Georgia and the Wildcats. Butch Jones, Pruitt’s much-pilloried predecessor, was 17–12 in his final 29 games at Tennessee. So the “quick turnaround” noted in the release announcing Pruitt’s extension has actually been a downturn to date.

Next up: Alabama. Things are fine.

The slightest glimmer of progress is over-rewarded so quickly in college football that schools often box themselves into ruinous buyouts when, stunningly, that progress turns out to be fool’s gold. Look around college football right now, and the landscape is rife with buyer’s remorse.

Syracuse (14): Yahoo Sports reported Saturday that Dino Babers’s buyout is at least $17 million, which is a ton at a school that isn’t raking in Big Ten or SEC-level media revenue even in the best of financial times. Babers’s record at the school is 24–30, just 6–11 since getting an enhanced contract in December 2018. His tenure at the school began with consecutive 4–8 seasons, then came a 10–3 breakthrough in ’18 that earned him the new deal. It was Syracuse’s best season since 2001, but it was built on nonconference wins over Western Michigan, Wagner and Connecticut, plus a very weak Atlantic Coast Conference. Since then, Syracuse has regressed.

South Carolina (15): After going 9–4 in 2017 and beating Michigan in the Outback Bowl, Will Muschamp got a $1 million-a-year raise to $4.2 million. A year later, he got an extension through 2024 (11 days after that deal was announced, the Gamecocks lost the Belk Bowl 34–0 to Virginia to finish 7–6). Since then, South Carolina is 6–10 with two notable wins: upsetting Georgia last year and holding off Auburn Saturday. The nine-win season that got South Carolina administrators so excited came four seasons after Steve Spurrier competed a third straight 11-win campaign. Muschamp’s buyout currently stands at $13.2 million.

Nebraska (16): Last December, flush with the thrill of 4–8 and 5–7 seasons, the school extended the contract of Scott Frost through 2026. Frost was paid $5 million a year to come back to his alma mater after big success at UCF. His victories to date at Nebraska: Minnesota, Bethune-Cookman, Illinois twice, Michigan State, South Alabama, Northern Illinois, Northwestern and Maryland. His record against ranked opponents: 0–7. His buyout will be just north of $25 million as of Dec. 1. Since awarding that deal, athletic director Bill Moos has complained about how unfair it is that the Cornhuskers must open this season at Ohio State on Saturday. Maybe he’ll pay Frost another million or two for having to take on such a burden.

LSU (18): Hey, if you go 15–0 and win the national championship, you’re entitled to get paid. That said, what LSU gave Ed Orgeron is pretty amazing: at $8.9 million this season, the only coach earning more is Nick Saban. That more than doubled his previous salary. Without Joe Burrow, Joe Brady, Dave Aranda and many others, Orgeron thus far has delivered a 1–2 record while serving up the only wins of the season to both Mississippi State and Missouri. The one-hit wonder comparisons to Gene Chizik (19) may be premature, but Coach O hasn’t done anything yet to dispel them.

Is Indiana (20) next? We’ll see. The Hoosiers gave coach Tom Allen a seven-year, $27.3 million deal last December after an 8–4 regular season, more than doubling his salary from $1.7 to $3.9 million. His overall record is 18–20, and he lost ace offensive coordinator Kalen DeBoer. Four weeks after his new contract was announced, Allen’s Hoosiers blew a 22–9 lead in the final five minutes to Tennessee—which, in turn, helped Jeremy Pruitt get paid. People helping people, the college football way.