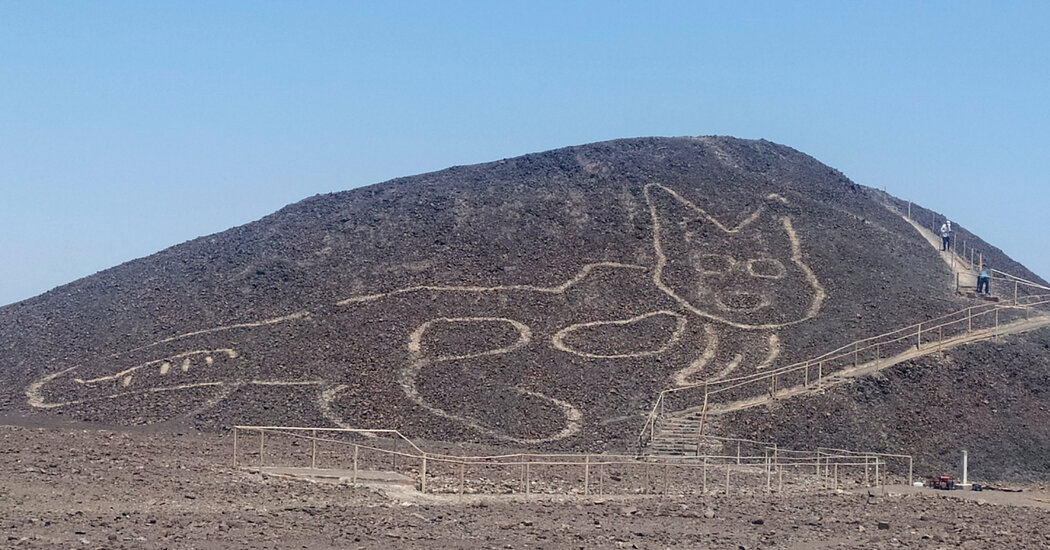 The image, stretching for 40 yards on a hillside in Peru, shows a creature with pointy ears, orb-like eyes and a long striped tail. It appears to be a cat lounging, as cats often do.

Archaeologists stumbled across the faded etching while remodeling a section of a UNESCO heritage site known as the Nazca Lines, Peru’s Ministry of Culture announced last week.

The catlike geoglyph — which experts say dates to 200 B.C. to 100 B.C. — is the latest discovery among the carvings of larger-than-life animals and plants previously found between the towns of Nazca and Palpa, in a desert plain about 250 miles southeast of the capital, Lima.

“The discovery shows, once again, the rich and varied cultural legacy of this site,” the ministry said in a statement.

The Nazca Lines were first discovered by a Peruvian aerial surveyor in 1927. Images of a hummingbird, a monkey and an orca were unearthed at the site. UNESCO has designated the Lines and Geoglyphs of Nasca and Palpa a World Heritage Site since 1994.

The cat etching is believed to be older than any of the prehistoric geoglyphs previously unearthed at Nazca.

“It’s quite striking that we’re still finding new figures, but we also know that there are more to be found,” Johny Isla, Peru’s chief archaeologist for the Nazca lines, told Efe, a Spanish news agency.

The designs were believed to have been created when ancient Peruvians scraped off a dark and rocky layer of earth, which contrasts with lighter-colored sand underneath. Researchers believe that the figures once served as travel markers.

Drone photography has led to several discoveries in recent years, Mr. Isla said. In 2019, researchers from Japan, aided by satellite photography and three-dimensional imaging, unearthed more than 140 new geoglyphs at the site.

Research and conservation work had continued at the site even during the coronavirus pandemic, when most tourist sites have been closed. Archaeologists and employees were working on the Mirador Natural, a lookout point in the protected site, when they began unearthing something intriguing. When they cleaned the mound, clear lines showing the sinuous body of a cat emerged.

“The figure was barely visible and was about to disappear because it is situated on quite a steep slope that’s prone to the effects of natural erosion,” the culture ministry said in a statement.

The authorities said that even a stray footprint could mar the fragile grounds, and have imposed strict rules against trespassing at the site. Before the pandemic shut down tours, visitors were permitted to view the lines and figures only from planes and lookout points.

But disturbances at the Nazca lines have occurred, drawing widespread condemnation.

In 2014, Greenpeace activists left shoe marks near a large hummingbird design when they placed a sign that promoted renewable energy, Peruvian officials said.

“You walk there and the footprint is going to last hundreds or thousands of years,” Luis Jaime Castillo, a Peruvian official and archaeologist, told The Guardian at the time. “And the line that they have destroyed is the most visible and most recognized of all.”

In 2018, a truck driver was arrested after intentionally driving his tractor-trailer across three lines of geoglyphs.

Even as Peru works to preserve its ancient sites, officials reopened Machu Picchu this month for one lucky tourist after he became stranded during the pandemic and waited seven months to see the 16th-century Inca citadel.