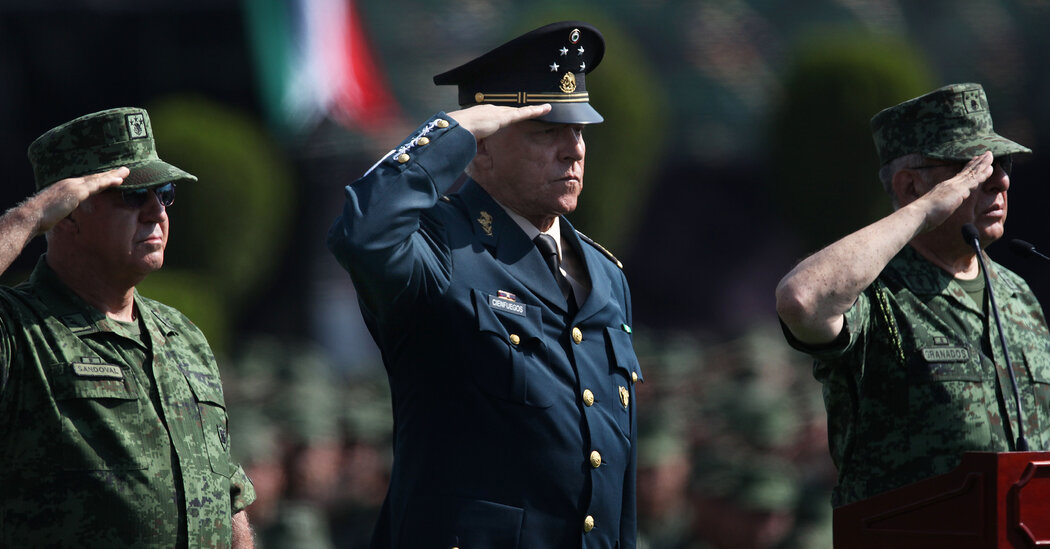 MEXICO CITY — American law enforcement agents were listening in as Mexican cartel members chattered on a wiretap, talking about a powerful, shadowy figure known as El Padrino, or The Godfather.

Agents had been closing in on him for months, suspecting that this central figure in the drug trade was a high-ranking official in the Mexican military.

All of a sudden, one of the people under surveillance told his fellow cartel members that El Padrino happened to be on television at that very moment. The agents quickly checked to see who it was — and found it was the Mexican secretary of defense, Gen. Salvador Cienfuegos, according to four American officials involved in the investigation.

In that moment, the authorities say, they finally confirmed that the mystery patron of one of the nation’s most violent drug cartels was actually the leader in charge of waging Mexico’s war against organized crime.

It was a stunning display of how deep the tendrils of organized crime run in Mexico, and on Thursday night General Cienfuegos was taken into custody by the American authorities at the Los Angeles airport while traveling with his family.

Even for Mexico, a country often inured to the unrelenting violence and corruption that have gripped it for years, the arrest was nothing less than extraordinary, piercing the veil of invincibility that the nation’s armed forces have long enjoyed.

Mr. Cienfuegos, Mexico’s defense minister from 2012 to 2018, is being charged with laundering money and trafficking heroin, cocaine, methamphetamines and marijuana from late 2015 through early 2017, according to an indictment unsealed in the Eastern District of New York on Friday.

The charges are the result of a multi-year sting that investigators called Operation Padrino. Officials say that General Cienfuegos helped the H-2 cartel, a criminal group that committed horrific acts of violence as part of its drug smuggling business, with its maritime shipments. In exchange for lucrative payouts, officials say, General Cienfuegos also directed military operations away from the cartel and toward its rivals.

The news not only casts a pall over Mexico’s fight against organized crime, but also underscores the extent of corruption at the highest levels of government. General Cienfuegos was defense minister throughout the administration of President Enrique Peña Nieto, who left office two years ago.

The damage to Mexico is hard to overstate. The general’s arrest comes only 10 months after another top Mexican official — who once led the Mexican equivalent of the F.B.I. — was indicted in New York on charges of taking bribes while in office to protect the Sinaloa drug cartel, one of Mexico’s most powerful criminal mafias.

That official, Genaro García Luna, served as the head of Mexico’s Federal Investigation Agency from 2001 to 2005, and for the next six years was Mexico’s secretary of public security, a cabinet-level position. In that role, he had the task of helping the president at the time, Felipe Calderón, create the nation’s strategy to battle drug cartels.

If the men are convicted, it means that two of the highest-ranking and most widely respected commanders ever to oversee the war on drugs in Mexico were working with organized crime — helping the very cartels that continue to kill record numbers of Mexicans.

The two cases call into question the American role in the drug war as well. For years, American officials have helped shape and fund Mexico’s strategies, and they have relied on their Mexican counterparts for operations, intelligence and broad security cooperation. If the allegations hold up, some of those same Mexican leaders were playing a double game.

“The difficulty in working in Mexico where you have this level of corruption is that you never really know who you’re working with,” said Mike Vigil, a former chief of international operations for the U.S. Drug Enforcement Agency. “There’s always a concern that Mexican law enforcement could compromise you, or compromise an informant, or compromise an investigation.”

Both Mr. García Luna and General Cienfuegos served at the top of the government when homicides spiked to historic levels, drug cartels waged war and military operations were expanded.

A mercurial presence, General Cienfuegos symbolized the prominent role the military plays in Mexico. Commanders are granted an extraordinary amount of autonomy, seldom bowing to political pressures and typically enjoying protection by the president.

Because of that power and autonomy, analysts and others have long suspected some top leaders of corruption. But with their elevated status, no one dared investigate — at least not in Mexico.

“This is a huge deal,” said Alejandro Madrazo, a professor at CIDE, a university in Mexico. “The military has become way more corrupt and way more abusive since the war on drugs was declared, and for the first time they may not be untouchable — but not by the Mexican government, by the American government.”

On Friday, responding to the arrest, Mexico’s current president, Andrés Manuel López Obrador, both defended the military and decried the bad actors in it. But it was unclear whether Mr. López Obrador would step back from his heavy reliance on the military, whose role has expanded during his administration to include everything from construction to public security.

Mexico’s military has been a central part of the nation’s domestic security since the crackdown on drug cartels began in 2006, with soldiers deployed to regions overrun by organized crime. The secretary of defense oversees that effort.

The use of soldiers trained in combat but not in policing has brought problems well beyond corruption. With the military front and center in the fight against narcotics trafficking, the Mexican government has never built an effective police force.

In December 2017, Mexico passed a security law cementing the military’s role in fighting the drug war, outraging the United Nations and human rights groups. They warned that the measure would lead to abuses, leave troops on the streets indefinitely and militarize police activities for the foreseeable future.

General Cienfuegos played a crucial role in convincing politicians to pass the law, which gave the military legal permission to do what it had been doing for a decade without explicit authorization. At one point, he threatened to withdraw his troops from the streets, arguing they were not trained for domestic security and were exposed legally.

But General Cienfuegos also defended the military, saying it was the only institution effectively confronting organized crime. As drug violence rocketed, he asked again and again that the federal government provide a legal framework to protect the forces.

“Today the crimes we are dealing with are of another level and importance; they involve a lot of people, sometimes entire families, and we are acting without a legal frame,” General Cienfuegos said in March 2018. “Without it, our help is impeded.”

The military has repeatedly been singled out for human rights abuses and the use of excessive force, including accusations of extrajudicial killings that dogged the armed forces throughout General Cienfuegos’s tenure as defense minister.

His arrest does not appear to have been a joint operation with the Mexican government. It reaches back to an American-led investigation in late 2013 of a Mexican drug cartel run by Fausto Isidro Meza Flores, a successor to the once powerful Beltran-Leyva drug organization, according to two American law enforcement officials.

Even though a group of American agents was able at the time to identify General Cienfuegos as a corrupt partner in the Meza Flores organization, there was pushback from other American and Mexican law enforcement agencies, and General Cienfuegos was never fully investigated, one of the officials said.

But by 2015, the official said, pressure to do something about General Cienfuegos increased. At least two separate American wiretaps began to pick up chatter about a powerful underworld figure who was referred to as “Padrino” and was believed to be General Cienfuegos.

The wiretaps had targeted the Sinaloa cartel and the H-2 cartel, a smaller criminal organization connected to Mr. Meza Flores’s group, the former official said.

The U.S. attorney’s office in Brooklyn has in recent months become ground zero for cases related to official corruption in Mexico.

Prosecutors there have not only charged Mr. García Luna and two of his former associates, Ramon Pequeno and Luis Cardenas Palomino, but have also prosecuted Edgar Veytia, the former attorney general of the state of Nayarit. He was sentenced to 20 years in prison last October for conspiring with the H-2 cartel.

The case against General Cienfuegos helps illustrate in some ways why it has been so difficult for Mexico to take the lead in these investigations.

Among the findings by U.S. authorities: General Cienfuegos was actively corrupting other Mexican officials by introducing high-level cartel members to those willing to swap bribes for favors.

At one point, court records say, he alerted the cartel that there was a U.S. investigation into their activities, prompting them to kill a fellow member they falsely believed to be sharing information with the authorities.