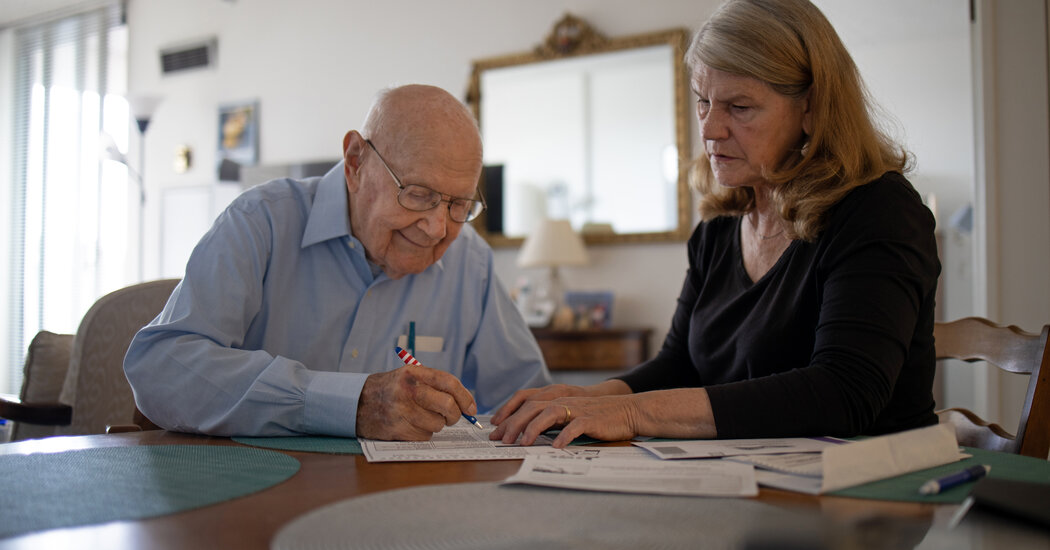 Edward Kozlowski often told his daughter how his father had walked across Siberia to come to America.

Born in Chicago 99 years ago, Mr. Kozlowski grew up on Midwestern farms. He left West Point during World War II to enlist in the Army Air Corps and made four flights over Europe on D-Day. A mechanical engineer, he spent much of his career at NASA and at Texas A&M.

And throughout his adult life, Mr. Kozlowski, a registered Republican, voted in virtually every election. “In my family, voting was the highest honor of citizenship,” his daughter, Judith Kozlowski, said. “You owed it to your country to vote; that was always the message.”

It remains important to Mr. Kozlowski, now a resident of an independent living facility in Chevy Chase, Md. He didn’t want to vote in person this year, wary of exposure to the coronavirus, so his daughter helped him request a mail-in ballot — even though he has developed dementia.

“Some days he’s right on the mark, sometimes he’s not,” said Ms. Kozlowski, 68. Her father can grow disoriented; prone to wandering, he requires round-the-clock caregivers. Yet he watches “The PBS NewsHour” and CNN “religiously,” his daughter said, and tuned in for the presidential and vice-presidential debates.

He has macular degeneration, so Ms. Kozlowski read him the ballot during short, kitchen-table sessions over several days. It probably helped that as a former federal prosecutor and elder justice consultant, she knew the rules better than most.

Her father could tell her which candidates he wanted to vote for.

And that is all it takes.

“There are many misperceptions of what ‘capacity to vote’ is,” said Charles Sabatino, director of the American Bar Association Commission on Law and Aging. “Incapacity to follow a recipe and cook dinner doesn’t mean incapacity to vote. The inability to remember your grandchildren’s names doesn’t mean you can’t vote.”

What is required — as the commission and the Penn Memory Center point out in a new guide — is the ability to express a preference.

“Can you pick among the choices?” said Dr. Jason Karlawish, a geriatrician and co-director of the Penn Memory Center. “That’s it.”

The Census Bureau has reported that more than 23 million American adults — close to 10 percent — have conditions limiting mental functioning, including learning and intellectual disabilities and Alzheimer’s disease or other forms of dementia.

Some are young or middle-aged, but most of the nearly eight million people with dementia are older adults. Many will be effectively disenfranchised.

Voting can become challenging for many older citizens, who may struggle to reach polling places, stand in lines, use computerized voting machines or read ballots printed in small type.

But misunderstandings about cognitive decline present still more obstacles. Workers in nursing homes and assisted living facilities, as well as family members, may refuse to assist impaired voters because they believe that dementia disqualifies them.

It doesn’t. A diagnosis of cognitive impairment does not bar someone from voting. Voters need pass no cognitive tests. They don’t have to be able to name the candidates or explain the issues. If they need help reading or physically marking the ballot, they can be assisted, either at the polls or with mail-in ballots. In some states, even people under court-appointed guardianship don’t lose their voting rights.

In any case, the proportion of people who have guardians is low. If you are considering helping someone with dementia to participate in an election, and they have registered to vote, in most cases there are only two real guidelines to keep in mind.

One: After reminding the person that Election Day is nearing, ask whether he or she would like to vote. A “no” stops the process, Mr. Sabatino said, but “anyone who expresses an interest in voting should be assisted, within the limits of the law.”

Two: You may read the voter the ballot choices, if he or she cannot read them, but cannot provide additional information or interpretation, although discussions before voting begins are permitted. “Ask them their choices and see if they answer,” Mr. Sabatino said. “If they do, they vote.”

Voters need not complete the ballot; they can vote for president and ignore everything else. There is no time limit; a relative or paid caregiver can help the voter complete a mail-in ballot over several days. Write-ins are permitted. “If they tell you they want to vote for F.D.R., you write in F.D.R.,” Mr. Sabatino said.

“You may find it disturbing to write in someone odd, but we let people do that,” Dr. Karlawish said. Voters with normal cognition may write in the name of Mickey Mouse, select the first person on the ballot, whoever that might be, and otherwise behave less than rationally. “We can’t hold certain people to standards that we don’t hold everyone else to, when it’s a matter of a fundamental right,” Dr. Karlawish said.

With the ongoing health crisis, however, “it’s going to be harder to participate for a lot of people this year,” said Myrna Pérez of the Brennan Center for Justice.

For residents of nursing homes and assisted living facilities, for example, visiting restrictions will make it hard for relatives to help with ballots.

Elaine and Charlie Fettig, married for 58 years, have seen each other in person just twice since June, when Mr. Fettig, 82, moved into a nursing home in suburban Philadelphia. He developed dementia after a stroke two years ago.

“We always voted,” said Ms. Fettig, 81. Permitted a distanced visit earlier this month, she filled out an application for a mail-in ballot; a staff member helped her husband make the legally required mark.

Now, Ms. Fettig wonders whether she will be able to visit again in time to help him vote. “If I could go every day, I wouldn’t have to worry about who’s going to help him make an X,” she said.

Earlier this month, a Medicare memorandum warned that nursing homes must ensure that residents can vote and provide assistance when needed.

Well before the pandemic, however, such facilities were chronically understaffed. Family caregivers may have to drop off ballots and pester administrators to help residents complete and return them. (Ms. Pérez advises consulting at least two trusted sources on state laws governing who may assist with and return a ballot.)

Most older people with dementia live at home, however, where wider use of mailed ballots might actually make voting easier. Twenty-two states and the District of Columbia are sending ballots or ballot applications to most or all active registered voters this year, the Brennan Center has said.

Could unscrupulous caregivers take advantage of impaired older voters by overriding their choices or discarding their ballots? It’s possible, but also illegal. “Anyone who sees undue influence or coercion should report it” to local election boards, Mr. Sabatino said.

A country committed to ensuring that all eligible citizens can vote could make this process simpler. During the 2008 election, for instance, Vermont experimented with mobile polling that sent trained election officials to selected nursing homes.

“Everyone said how much residents felt their dignity and sense of worth was enhanced,” Dr. Karlawish said; he was part of a research team following the effort.

But although some jurisdictions emphasize outreach to older voters, mobile polling remains rare, probably because election boards are underfunded.

So, as often happens, the responsibility largely falls to families. On Oct. 8, after considerable discussion, Judith Kozlowski helped her father make his selections. He allowed her to disclose that, after a lifetime of voting Republican, this time he had voted for Joseph R. Biden Jr.

She drove him to the drop box outside a local community center, where other voters and family members were also returning ballots. They spontaneously applauded as Mr. Kozlowski, using a walker, approached and slid his ballot through the slot.