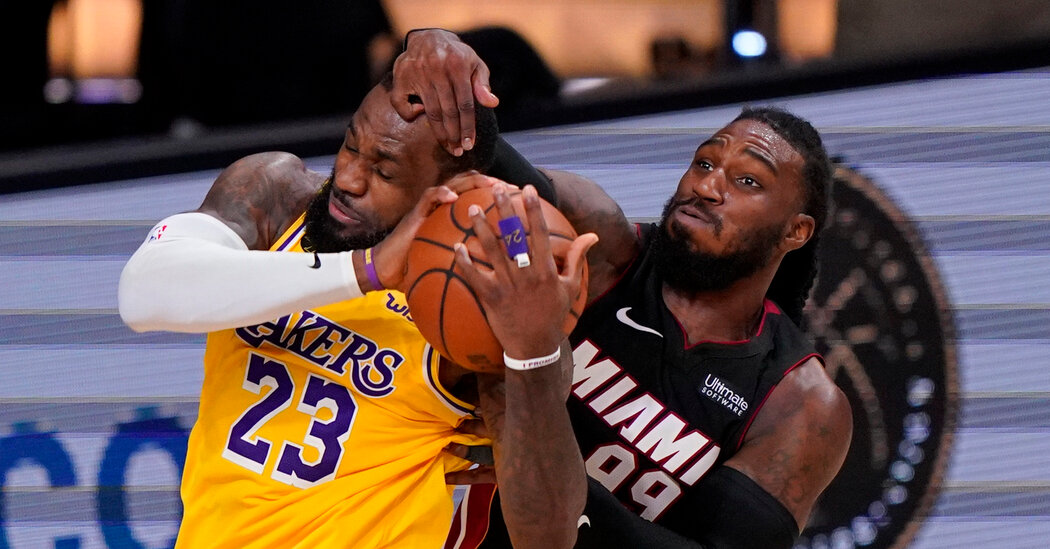 LAKE BUENA VISTA, Fla. — Anthony Davis of the Los Angeles Lakers caught fingers in his eye and elbows in his chest, and that was before his teammate Alex Caruso banged into his legs, both players tumbling like bowling pins. LeBron James made a layup after a fender-bender of his own, then flexed his biceps while flat on his back.

And pity the poor basketball, an innocent bystander that Rajon Rondo spiked off the court at halftime as the Lakers found themselves in another tussle with the Miami Heat.

As the longest, craziest and most challenging season in league history shifts toward a merciful conclusion, the bubble at Walt Disney World has morphed into a cage match for the N.B.A. finals. The Lakers and the Heat are wearing one another down until a champion emerges.

The physical toll of the season — and the series itself — was on display before, during and after the Lakers’ 102-96 victory in Game 4 on Tuesday night.

It was evident during pregame warm-ups, as the Heat’s two injured stars — Bam Adebayo and Goran Dragic — tested themselves to see if they could play. Adebayo was in the starting lineup with a strained neck, while Dragic appeared emotional on the bench, a torn ligament in his left foot sidelining him for the third straight game.

As for the game itself, neither team cluttered the evening with artistry or finesse. James committed five turnovers in the first half. The Lakers shot just 44.3 percent from the field and 35.9 percent from 3-point range for the game. And after sinking his first five field-goal attempts, the Heat’s Jimmy Butler shot 3 of 12 the rest of the way — often while being defended by Davis.

“We just wanted to give him a different look,” said Davis, who added that he had been irked by the Lakers’ effort in a Game 3 loss. “We feel like we got bullied. We feel like we got outworked. They were scrappier than us, and we didn’t really like that. We saw it on film. They were doing whatever they wanted, especially Jimmy.”

On Tuesday, Davis had 22 points and 9 rebounds to help lift the Lakers to a three-games-to-one series lead ahead of Game 5 on Friday night, when they can secure the franchise’s 17th championship. Bear in mind that only one team in finals history has ever come back from a three-games-to-one deficit to win a title, and that team — the 2015-16 Cleveland Cavaliers — was led by James.

After finishing with 28 points, 12 rebounds and 8 assists in Tuesday’s game (he recovered from those early turnovers), James made a very slow walk to the dais for his news conference, a small wrap on his right knee. In a rarity, both teams were looking at two days off before Game 5 — as opposed to just one — and James was asked whether the extra rest made any difference to him at this mature stage of his career.

He recalled preparing for his 258th career playoff game earlier in the day. He awoke from his afternoon nap and sent a text message to his teammates, telling them that he considered their game that night to be “must-win.” He was basing that assessment on his various travels over 17 seasons, and he wanted his teammates to be aware of the stakes.

“I felt that vibe,” James said. “I felt that pressure. I felt like for me personally, this was one of the biggest games of my career.”

Other veterans sensed the game’s importance, as well. JaVale McGee, a center who won two championships with the Golden State Warriors before joining the Lakers last season, told his teammates before they took the court that they should feel exhausted by the end of the night.

“As a team, we never want to be outworked,” Davis said. “We always say that if we’re the team that’s more physical — the hardest-working team — we really have a great chance of winning basketball games, especially with the talent that we have.”

Even when James found space in the open court, he had to hip-check Tyler Herro into the arena’s friends and family section before he could soar for a dunk.

James wore Creamsicle-colored sneakers, but they could have been steel-toed boots.

The Lakers had just two losing streaks this season. They lost four games in a row in December, including a Christmas Day loss to the Clippers that seemed vaguely troubling at the time, and then lost back-to-back games in January — two games separated by Kobe Bryant’s death.

But the Lakers have been resilient this season, and they were determined not to lose two straight to the Heat. Not after so much work, hard work, that now has them one win from a title.