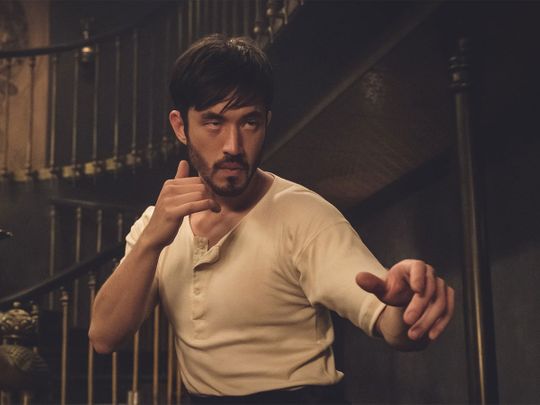 Even nearly 50 years after his death, Bruce Lee can still make ripples.

From this summer’s ESPN documentary, “Be Water,” to Quentin Tarantino’s heavily criticized depiction of him in “Once Upon a Time … In Hollywood,” the martial arts legend continues to captivate audiences.

That continues with “Warrior,” a Cinemax historical drama inspired by his original idea and premiering its second season Friday. A screen icon who struggled with racism, Lee is now influencing the careers of the mostly Asian cast as Hollywood faces a national reckoning on race and representation.

“I’m more proud of something like `Warrior’ than if I was putting on a superhero costume and being the token Asian,” said leading man Andrew Koji, who credits the show with helping him land the role of Storm Shadow opposite Henry Golding in the upcoming “G.I. Joe” movie “Snake Eyes.”

“It has helped me open doors, literally, but also in terms of confidence in my ability.”

“They wrote this a year and a half ago,” Koji said. “It’s just scary how relevant it is because we haven’t learned.”

The production came from an eight-page, typed treatment Lee offered to Warner Bros. in 1971. But the studio “wouldn’t sign off on having a Chinese man star in an American TV series,” according to daughter, Shannon Lee.

The treatment and Lee’s accompanying handwritten notes sat in his family’s garage until 2015, when “The Fast and the Furious” franchise director Justin Lin asked Shannon Lee about it. Lin helped get the concept on the development track and became an executive producer. Jonathan Tropper, co-creator of the show “Banshee” and a Lee fan-boy, boarded as showrunner.

Koji, who is of Japanese and British descent, studied martial arts growing up but knew little about Lee. He’s since consumed Lee’s movies, writings and philosophies. In the beginning, Koji was worried that he was essentially playing Lee and that people would compare them. But Shannon Lee assured him that they wanted the best actor, not martial artist.

“She said ‘No, just keep doing your thing. Don’t worry about finding out who Bruce Lee is,”’ Koji said.

It remains unclear whether “Warrior” will get a third season. Cinemax decided earlier this year to stop producing original programming. Canceling it would especially hurt in a TV landscape with few Asian-led vehicles.

Shannon Lee isn’t giving up on finding a new home for “Warrior,” which will eventually be available on HBO Max. It’s helped reveal another side of her father, she said.

“I think he’s really getting his due as a creative _ someone who knows how to story-tell,” Shannon Lee said. “We’re finally getting to see he wasn’t just a flash in the pan.”

Any fan of Lee _ who died in 1973 at age 32 after an allergic reaction to pain medication _ will recognize his DNA in the brutal, blood-spilling fights.

Dustin Nguyen, a star on the original “21 Jump Street” series in the ’80s, plays a menacing tong leader and directed an episode this season. A huge fan who studied under Lee’s old training partner, Nguyen helped sprinkle in nods to his idol.

“It’s just little things that the writers put in there to pay homage to Bruce Lee without being a caricature, which I think is the danger zone whenever you get to the subject of Bruce Lee,” Nguyen said. “There’s lots of bad caricatures and portrayals of who he is and what people think he is.”

One of those, in Shannon Lee’s view, was her father’s “cameo” in last year’s “Once Upon a Time … In Hollywood” movie. She was incensed watching a boastful Bruce challenge Brad Pitt’s stuntman to a fight. It was especially “irresponsible” as Tarantino never consulted her but spoke with families of other real-life characters.

“He was not a bully and he was not arrogant,” she said. “Quite frankly, my father was treated in that film like he was by white Hollywood when he was alive.”

It was sheer coincidence that the documentary, “Be Water,” aired on ESPN in June. Almost like a tonic to Tarantino’s film, director Bao Nguyen fleshed out the difficult path Lee had to stardom through archival footage and interviews, including with Shannon Lee. The title comes from Lee’s belief that fighters need to be “formless” and adapt like water.

If Lee were alive, his daughter believes he would be part of the current national conversation about Hollywood white privilege and support Black Lives Matter.

“He believed in celebrating people’s cultures and backgrounds and not holding it against them,” Shannon Lee said. “He was interested in people showing up as themselves and being authentic.”