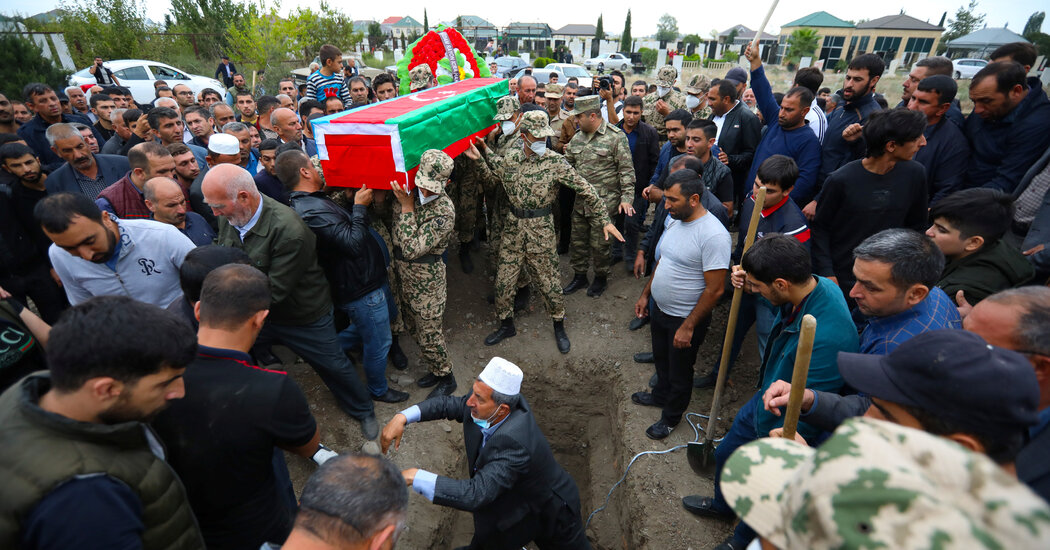 MOSCOW — Fighting broke out a week ago in Nagorno-Karabakh, a breakaway region in Azerbaijan with an Armenian majority, setting off alarms about the risks of a wider war that might draw in Russia, Turkey and Iran.

The conflict had simmered for decades in a remote mountain region of the Caucasus without much strategic importance to anyone. Why is this escalation in fighting over the past week any different from the sporadic violence of the past?

One big distinction: A more direct engagement in the conflict by Turkey in support of its ethnic Turkic ally, Azerbaijan, in a region of traditional Russian influence.

The fighting comes as Turkey increasingly flexes its muscles in the Middle East and North Africa, adding to the dangers of regional escalation in what had been a mostly local, if venomous, ethnic conflict. And, distracted by the coronavirus pandemic, international mediators missed warning signs as tensions mounted in Nagorno-Karabakh over the summer, analysts say.

Here’s a guide to the conflict and why it has flared again.

The region is an ethnic tinderbox

A war that began in the late Soviet period between Armenians and Azerbaijanis set the stage for the fighting today in Nagorno-Karabakh. The ethnic Armenian enclave in Azerbaijan declared independence and was nearly crushed in the ensuing war before its fighters captured large areas of Azerbaijan in a series of victories leading up to a cease-fire in 1994.

The region became one of a half-dozen so-called frozen conflict zones in the vast area of the former Soviet Union. Its deep-rooted ethnic animosity set it apart, though, as did the fact that it was the only breakaway state not occupied by the Russian military.

The settlement reached 26 years ago, always meant to be temporary, left about 600,000 Azerbaijanis who had fled the area stranded away from their homes and Nagorno-Karabakh vulnerable to attack by Azerbaijan, which has vowed to recapture the area.

The global oil market, as is often the case, became a backdrop for the conflict as did the growing economic and military strength of Azerbaijan, an oil exporter.

The Nagorno-Karabakh region was always ripe for renewed local conflict, but in the past Russia and Turkey had at times cooperated to tamp down tensions. The latest fighting began on Sept 27. Azerbaijan said Armenia shelled its positions first, while Armenia says an Azerbaijani offensive was unprovoked. At least 150 people have been killed so far.

A local fight threatens to draw in regional powers

The uneasy cooperation between Turkey and Russia is starting to fade as both countries become increasingly assertive in the Middle East and the United States has stepped back.

Relations between all three countries have become more complicated. Turkey has managed to alienate the United States by buying antiaircraft missiles from Russia and cutting a natural gas pipeline deal seen as undermining Ukraine. At the same time, it is fighting in proxy wars against Moscow in Syria and Libya.

After Russian airstrikes in Syria killed Turkish soldiers earlier this year, Turkey soon appeared on other battlefields where Russia was vulnerable.

In May, Turkey deployed military advisers, armed drones and Syrian proxy fighters to Libya to shore up the U.N.-backed government and push back a Russian-supported rival faction in that war. In July and August, it sent troops and equipment to Azerbaijan for military exercises.

Armenia has said Turkey is directly involved in the fighting and that a Turkish F-16 fighter shot down an Armenian jet. Turkey denies those accusations.

Russia and France, though, have both supported Armenia’s claim that Turkey deployed Syrian militants to Nagorno-Karabakh, following its playbook in Libya.

A deputy chairman of the Russian Parliament’s international affairs committee this week raised for the first time the prospect of a Russian military intervention as a peacekeeping effort, though more senior officials in the Kremlin and foreign ministry are calling for a negotiated truce.

Iran, meanwhile, shares a direct border with the breakaway region in an area of grassy, rolling hills along the Aras River, the scene of some of the heaviest recent fighting. The Nagorno-Karabakh military said Thursday that it had shot at an Azerbaijani helicopter, which then crashed in Iran.

Distracted by other issues like the pandemic and a popular uprising in Belarus, another former Soviet state, international mediators missed warning signs and possible openings for diplomacy, analysts say.

Travel restrictions related to the coronavirus prevented traditional shuttle diplomacy over the summer, said Olesya Vartanyan, a senior Caucasus analyst at the International Crisis Group. For the combatants in Nagorno-Karabakh, “this is a perfect time” to start a war, she said.

When Armenia, a Russian ally, killed a general and other officers in Azerbaijan’s Army in a missile strike during a border skirmish in July, Turkey immediately offered to help prepare a response, a retired Turkish general, Ismail Hakki Pekin, has said.

Turkish and Azerbaijani joint military exercises ensued. The shrinking American role was a backdrop as Turkey stepped up its assertive policies, though the United States never wielded as much influence in the south Caucasus region as Russia.

What to watch for now

The last major American effort to broker peace in the Nagorno-Karabakh conflict was 20 years ago when the United States invited the sides to talks in Florida, but the issue dropped off the U.S. agenda after the Sept. 11, 2001, terrorist attacks.

Mediators then promoted a swap of territory, including some that Azerbaijan lost in the 1990s war, but neither side agreed to trade land.

The most optimistic outcome in the current fighting, analysts say, would be a return to the same unhappy status quo of a week ago rather than a wider war, which might draw in Turkey and Russia.