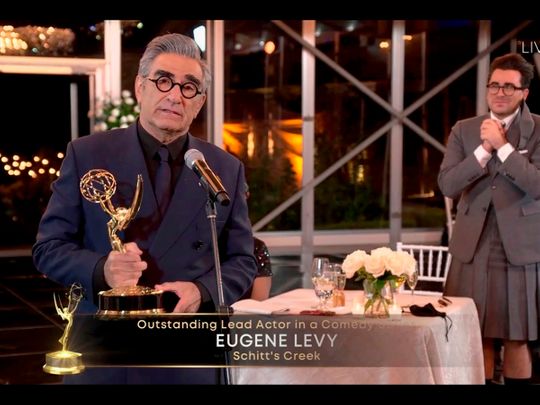 Los Angeles: Quirky feel-good show “Schitt’s Creek” swept the early Emmy awards on Sunday in a live show where the coronavirus pandemic meant most celebrities took part from their homes and backyards.

“Schitt’s Creek,” a sleeper hit on the small Pop TV network about a wealthy family that is forced to live in a rundown motel, won best comedy series, while Canadian stars Catherine O’Hara and Eugene Levy took the lead comedy acting awards.

“This is completely overwhelming” said Daniel Levy, Levy’s son, who won for writing and directing as well as supporting actor. He accepted his awards from a restaurant in Ontario, Canada, where members of the “Schitt’s Creek” cast and crew were gathered together, all wearing masks. Annie Murphy was named best supporting actress.

The coronavirus pandemic meant no red carpet and no physical audience for the three-hour show, which was broadcast live on ABC. Instead, producers sent camera kits and microphones to all the nominees, scattered in 125 places around the world, who chose how and where they wanted to be seen.

“Hello, and welcome to the PandEmmys!,” said Jimmy Kimmel, opening the show.

“It seems frivolous and unnecessary to do this during a global pandemic,” the comedian and late-night talk show host added.

“What’s happening tonight is not important. It’s not going to stop COVID. It’s not going to put out the fires, but it’s fun. And right now we need fun. … This has been a miserable year. It’s been a year of division, injustice (and) disease,” he added.

Not everyone was appearing remotely. Actresses Jennifer Aniston and Tracee Ellis Ross were among presenters who made it to the Emmys studio set in Los Angeles, keeping a safe distance.

The “Schitt’s Creek” winners got their trophies delivered by a person dressed in a custom black-and-white hazmat suit, designed to look like a tuxedo.

HBO’s alternative reality show “Watchmen,” infused with racial themes, is the favorite to take the best limited series later on Sunday, along with actress Regina King.

“I think it’s ‘Watchmen’ all the way on Sunday,” said Gerrad Hall, senior TV editor at Entertainment Weekly. “It was a monumental series from the writing, performing, directing and technical aspects.” In drama, Netflix, which dominated nominations with a record 160 total nods, is hoping thriller “Ozark” will bring the streaming platform its first best drama series Emmy.

HBO’s “Succession,” the wickedly juicy saga of a fractious media family, may thwart “Ozark,” despite not having been on the air since late 2019.

One of the night’s biggest cliffhangers looks to be between “Ozark” star Laura Linney and Jennifer Aniston (“The Morning Show”) for best drama actress, awards pundits say.