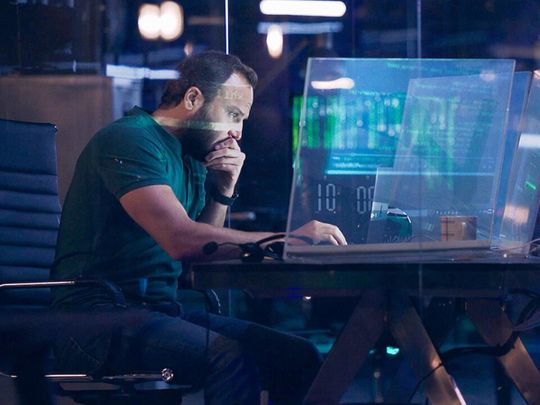 Damascus: The new Emirati mini-series, The Platform, aired on Netflix on September 3 2020, creating waves throughout the Arab World. Within a week, it was registered as the most popular Arabic show on Netflix, prompting one of its stars, Samer Ismail, to describe it as a “turning point in Arab and Gulf drama.” Such productions were previously reserved exclusively for Ramadan, and never aired outside its high season, fearing lower viewership.

The 12-episode work features a frontline cast of Arab actors and is written by Syrian scriptwriter Hozan Akko. It is directed by German director Rodrigo Kishner. It features celebrated American actor Dean Caine, co-star of the 1990s television series Lewis & Clark: The New Adventures of Superman.

Set first in 1980s Damascus, it opens with the story of a member of the Muslim Brotherhood (played by Syrian star Salloum Haddad) who is planning a terrorist attack targeting a school bus. Joining him in the conspiracy is Naji, a deranged Brotherhood commander who rapes young boys and ends up commanding a Daesh-affiliated cell in Syria after outbreak of the 2011 conflict. The terrorist operation is aborted by Haddad’s son Karam, who reports him to Syrian intelligence before the explosives are detonated and lands him 30-years in prison.

Meanwhile, furious with his father, Karam (played by Syrian actor Maxime Khalil) travels to the US and establishes an open source website called “The Platform,” exposing extremist networks around the world. He is forced to return to Syria one day after his father’s release from prison, only to discover that his mother died after falling off the family balcony. Due to his father’s criminal record, he is convinced that she was killed, saying that it was intentional homicide committed by her husband, but lacks proof to avenge her death.

The young man leaves Damascus in distress and heads to Abu Dhabi, where he partners with a UAE entrepreneur named Nasser, played by celebrated Saudi actor Abdul Mohsen Al Nimer. The two men decide to take “The Platform” to new heights, tracking a Turkish mafia in the Black Sea that sends arms and extremists to Libya, under the garb of runnings a cosmetics company. Helping them is an Emirati anchorwoman-turned social media star named Sheikha, played by UAE presenter Muhira Abdul Aziz and a Syrian fashionista played by Syrian actress Jenny Esber.

Their investigative work takes them to dangerous places on the dark web, showing that Karam’s brother Adam, a medical doctor, is trapped with a Daesh-cell in the Syrian northeast, trying to escape with his young wife while carrying sensitive information about Daesh.

“This is a completely different work” said Abdul Mohsen Al Nimer, attributing The Platform’s success to its scriptwriter Hozan Akko, whom he described as the “pioneer of thriller drama.” Veteran UAE actor Ahmad Al Jasmi added that due to its success, “The Platform can surely take a second and third season.” UAE producer Mansoor Al Yabhouni Al Daheri described it as “an Emirati work with a global vision” adding that plans are already underway for additional seasons, to be shot in Abu Dhabi. That is where the first season was filmed, and even the scenes set in Damascus were shot in the old quarters of Abu Dhabi.

Meanwhile, writing on CNN Arabic, film critic Samia Ayesh wrote: “The real star of the show was the technical mastery, which we are not used to in Arabic works.” She added: “Rarely was there a scene that was boring or too long.”