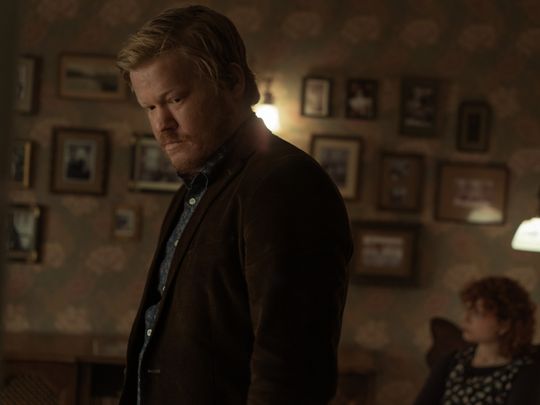 ‘Breaking Bad’ creator Vince Gilligan recalls the smallest of moments from shooting the AMC drama’s final season: Jesse Plemons stood outside the compound as meth cook Todd Alquist, holding a half-empty mug of tea handed to his character by the business associate with whom he is infatuated. Straying from the script, Plemons looked down at the lipstick mark she left on the rim and gently traced it with his thumb.

“Then he drinks out of the mug in the same spot where her lips were,” Gilligan says. “It was so perfect when we saw it, we just about jumped out of our skins in the editing room. That was all Jesse.”

Gilligan selects this anecdote out of numerous underscoring how deeply Plemons immersed himself into Todd’s mindset. He isn’t the only one to boast a trove of such memories. Two decades into his acting career, Plemons, 32, is esteemed by industry peers and critics alike for the dimension he brings to affable-seeming characters, often accomplished with a dash of lurking menace.

Since breaking out as tenderhearted high-schooler Landry Clarke in television’s ‘Friday Night Lights’, Plemons has worked with filmmakers including Paul Thomas Anderson and Martin Scorsese, and starred in series such as ‘Breaking Bad’, ‘Fargo’ and ‘Black Mirror’. But he says his most challenging role yet comes from writer-director Charlie Kaufman, whose penchant for exploring the unconscious mind thrust the actor into the shell of a wistful, desperately lonely man driving to his parents’ farm with a new girlfriend.

Video-chatting from the San Fernando Valley home he shares with fiancee Kirsten Dunst, Plemons says he jumped at the offer to star in the melancholy thriller ‘I’m Thinking of Ending Things’, released Friday to Netflix. As one would expect of a Kaufman script — eg ‘Being John Malkovich’, ‘Adaptation’, ‘Eternal Sunshine of the Spotless Mind’ — the actor found himself wading through swirling waters, unable to cling onto any semblance of reality. He and co-star Jessie Buckley went on to spend much of the shoot confined to a car on an upstate New York sound stage, where a manufactured blizzard only exacerbated the claustrophobia of their characters’s tense, meandering conversations.

“It was the best shake-up you could ask for, as an actor, to trust yourself and trust Charlie’s decision to put you in his film,” Plemons says. “To me, it felt like each take was its own train with its own tracks. At the beginning of a take, ‘See you in 16 minutes, there’s no idea of where we’ll be at the end of this.’ It was different. It was just about giving in, and relinquishing control or needing to know.”

Plemons is often likened to Matt Damon, earning him the nickname “Meth Damon” from “Breaking Bad” fans. (He actually played a younger version of Damon’s character in the 2000 film “All the Pretty Horses,” though his scenes were tragically omitted from the final cut.) But the more apt comparison as Plemons carves out a niche for himself with charming-yet-disquieting roles might be to Philip Seymour Hoffman, the late character actor who starred in Kaufman’s 2008 directorial debut, ‘Synecdoche, New York’, and whose son Plemons played in Anderson’s 2012 psychological drama ‘The Master’.

Asked who inspires him, Plemons names Hoffman immediately and re-enacts the bit from ‘The Talented Mr. Ripley’ where Hoffman’s snide character, Freddie Miles, messes with Tom Ripley (Damon, coincidentally) before confronting him about impersonating their friend. Plemons-as-Hoffman plinks imaginary piano keys, making a face and flicking his eyes upward as Freddie does to taunt Ripley.

“I’m not doing it justice, but it’s such a tiny moment that’s now become one of the first things I think of whenever I think of his choices,” he says of Hoffman. “They were pretty remarkable.”

Plemons grew up in small-town Texas re-watching ‘Lonesome Dove’ miniseries with Robert Duvall and Tommy Lee Jones, acting on Westerns filming nearby. He was “probably one of those silly kids who took it seriously even as an extra,” he says. “Like, ‘Oh my god, I gotta do this,’ no matter what the scenario was.” To this day, he chooses projects based on which ones produce that sort of gut reaction, though he would accept almost any role from a filmmaker he admires: “It doesn’t matter if the (character) is a murderer,” he notes. “I just want to keep bouncing all over the spectrum, you know? Mix it up.”

Kaufman’s film appealed to both approaches, giving Plemons an opportunity to work for a director with whom “there was no separation … It felt like he was in the trenches with you at every turn.”

Based on Iain Reid’s debut novel, ‘I’m Thinking of Ending Things’ is primarily a two-hander told from the perspective of the Young Woman, as Buckley as billed, though her character’s name changes throughout. Her narration guides us through the suffocating drive to the farm, where strange encounters — is that her in boyfriend Jake’s childhood photo? — and his deranged parents (David Thewlis and Toni Collette, of course) send the film down a surreal path. Buckley balances the inner turmoil of feeling trapped in a strained relationship with an eerie sense of calm toward the building chaos.

Plemons’s performance arguably anchors the film, with Jake unravelling at an even pace (until the final act, anyway). The confidence with which he recounts the horrors of farm life to the Young Woman devolves into an uneasy insistence that she avoid the basement, and eventually into musing that “I don’t think we know how to be human anymore.” Plemons’s hesitant tone and awkward pauses invite sympathy for an often unpleasant character he believes “could have done something incredible” in different circumstances.

The actor compares his capacity to learn on the set of ‘I’m Thinking of Ending Things’ to his experience on ‘Friday Night Lights’, a series on which he was granted the time and freedom to develop the naturalistic acting technique he still employs today, even on stylised projects like this one.

“There’s something really universal about Jake and these characters and the world,” Plemons says. “He was just so unable to exist with other people. He just had a tough time relating … To me, it was sort of a heightened version of a lot of things that I’ve touched on in other characters.”

It is probably in Dunst’s best interest that Plemons isn’t the sort of actor to bring his work home. She does hear strange whirring noises coming from their basement sometimes, but it usually turns out to be Plemons cleaning his vinyl records. He has become very serious about this hobby in quarantine, she says, noting that he makes sure to transfer each record’s pamphlet into “the good plastic” and even ordered amplifier bulbs and a handmade needle from Japan. She doesn’t touch the system anymore.

“I can’t even be like, we’ve been listening to Harry Nilsson,” she says. “We used to, but now we listen to the most obscure music. Some Italian guy from the ‘70s. But also, we just ordered a ‘Sesame Street’ one.”

Plemons and Dunst, parents to their 2-year-old son, Ennis, met on the second season of “Fargo” playing married couple Ed and Peggy Blumquist. They clicked almost immediately, running their singsong-y lines at night — “Don’t get any ideas, we were not together at all,” she says — and becoming each other’s coaches on set. Both actors earned Emmy nominations for their work on the series (and Plemons landed another a couple years later for the “USS Callister” episode of ‘Black Mirror’).

In an industry where inflated egos mixing with deep-rooted insecurities can lead to toxic environments, Dunst says, it was refreshing to work with someone who, as the couple often hears, is “so normal.”

“There are no affectations with him, in terms of his personality or what he needs on set,” Dunst continues. “He’s just a dude who also acts. He’s a very down-to-earth person who’s been doing this for a very long time.”

John Francis Daley and Jonathan Goldstein, who directed Plemons in the 2018 comedy ‘Game Night’, were looking for an actor with dramatic chops to play Gary, the creepy, lonely cop who lives next door to leads Jason Bateman and Rachel McAdams. Daley and Goldstein reworked the script with Michael Shannon in mind as a “funny, buttoned-up, strange and slightly ominous guy for the role,” Daley says. To their horror, they left the message “Think: Michael Shannon” on the material they sent over to Plemons.

Rather than being insulted, he thanked them for the guidance.

“Just one example of the bigheartedness and lack of ego that goes with Jesse Plemons,” Goldstein says. He remembers Plemons flying in and out of Atlanta for the shoot, failing to mention until it came up naturally that, at one point, he was leaving to work on ‘The Irishman’ alongside heavyweights Al Pacino and Robert De Niro. “I would definitely let people know if I were working on a Scorsese movie,” Goldstein adds.

Plemons works steadily but maintains a relatively low profile in Hollywood, which he explains by observing that “with any form of success, it’s like there are multiple doors set up.” Behind Door No. 1 is the model sustaining most prolific character actors: With vanity left at the door, he can fully disappear into singular roles. Daley notes that Plemons’s comfort inhabiting a sinister character like Gary prevented him from becoming the kind of dramatic actor who overdoes comedy to “sweaty and awkward” effect.

“He’s the kind of actor you get into this business hoping to be able to work with — I’ve been blessed in that regard,” Gilligan says. “When Bryan [Cranston] got the role of Walter White [in ‘Breaking Bad’], I said, he’s such a talent that even if he were a complete jackass, he’s still be worth working with. Jesse Plemons is one of those guys. Even if he were difficult, he’d be worth it. But on top of that, he’s a prince.”