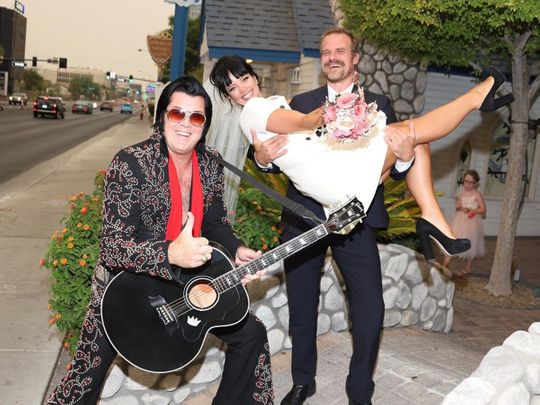 Lily Allen and David Harbour have plenty of reasons to smile this week after tying the knot in Las Vegas.

The English singer-songwriter and ‘Stranger Things’ star confirmed their marriage on Wednesday by sharing several photos of them living their best lives in Sin City, where they were wed by an Elvis Presley impersonator in a casual ceremony.

“In a wedding officiated by the king himself, the people’s princess wed her devoted, low born, but kind credit card holder in a beautiful ceremony lit by the ashen skies courtesy of a burning state miles away in the midst of a global pandemic,” Harbour captioned a photo of the beaming couple — and Elvis — posing outside the Graceland Wedding Chapel. “Refreshments were served at a small reception following.”

A second snap shows Harbour, 45, and Allen, 35, grabbing some post-wedding In-N-Out burgers with the ‘Smile’ hitmaker’s two children in their formal attire. The actor donned a dark suit ensemble for the occasion, while Allen sported a short, white Dior dress and veiled updo.

According to People magazine, the Grammy nominee and ‘Black Widow’ actor first sparked dating rumours when they attended the 2020 BAFTA tea party together in January, and Allen debuted her engagement ring on Instagram in May.