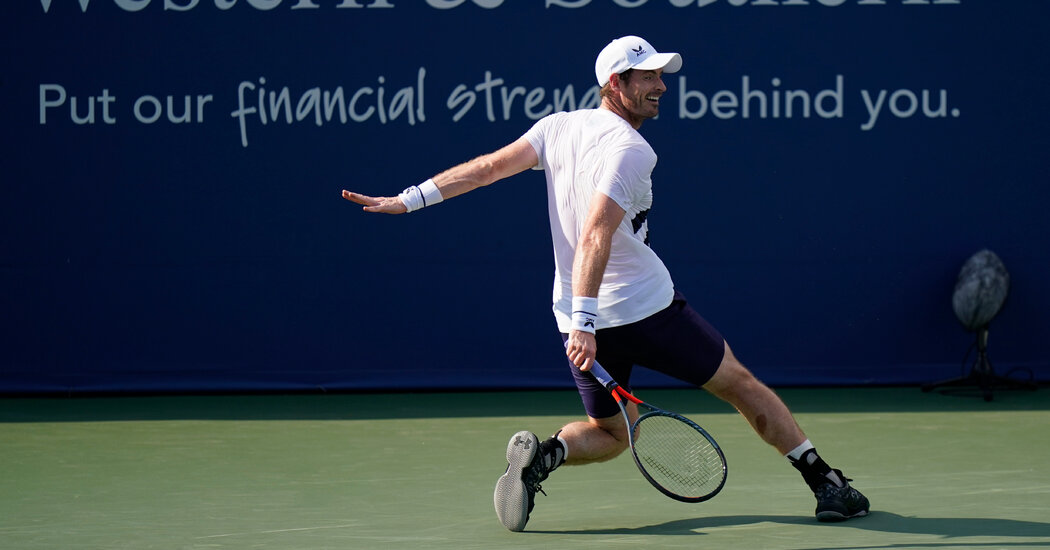 As so often, Andy Murray knew what he was talking about.

“I do feel there will be a lot of upsets,” Murray said just before the men’s tennis tour ended its five-month hiatus.

On a steamy Monday in Queens, he went out and proved himself right by upsetting the No. 5 seed Alexander Zverev, 6-3, 3-6, 7-5 in the second round of the Western & Southern Open.

“It would have been a tough one to lose,” said the unseeded Murray, who surrendered a 4-1 third-set lead before Zverev’s shaky serve and Murray’s grit and talent finally made the difference.

In their only previous match, Murray’s breeze of a straight-set victory over Zverev was anything but a surprise. It came in the first round of the Australian Open in 2016 when Zverev was still a teenager and Murray, on his way to a knighthood and a No. 1 ranking, was still an uncontested member of the so-called Big Four, along with Roger Federer, Rafael Nadal and Novak Djokovic.

But that was before Murray’s hip problems almost knocked him out of the game for good, before he stared into his camera phone in the middle of the night in Washington, D.C., in the summer of 2018 and tearfully admitted that it felt “like the end for me.”

“My body just doesn’t want to do it anymore, and my mind doesn’t want to push through the pain barrier anymore,” he said, his face illuminated in the dark like something out of “The Blair Witch Project.”

That soliloquy was after one hip operation, but he would ultimately decide to try a second procedure — this one a “resurfacing” in which a thin layer of damaged bone was shaved off the ball of the hip joint and replaced with a metal cobalt-chrome cap. A metal socket is also put in place.

The surgery had already saved the career of Bob Bryan, the American doubles star. Bryan’s surgeon, Dr. Edwin Su, spoke to Murray before he decided to go ahead with the surgery and told him that he, too, was an ideal candidate because of his fitness and youth.

Despite the grinding nature of tennis footwork, with its quick shifts of direction and repetitive motions, Su was convinced that if Bryan could play doubles on tour, Murray could take it a step further and play singles.

“I’m so glad to be right about that,” Su said in a telephone interview Monday as he watched Murray’s victory over Zverev on television, the only option for fans in this strange year. “I love to always see the ultimate potential of the implant that I use on a regular basis, and Andy’s really testing it to the limits for sure.”

The victory over the seventh-ranked Zverev was Murray’s first over a top 10 player since 2017, when he beat No. 9 Kei Nishikori in the quarterfinals of the French Open.

Finishing off Zverev was a collective effort. Murray lost four straight games from 4-1 in the third. Zverev served for the match at 5-4, only to experience a less inspirational sort of resurfacing: the return of the second-serve yips that were a major concern before the pandemic.

Two points from the match at 30-30, he double-faulted on three of the next four points to lose his serve. After Murray held to go ahead, 6-5, Zverev double-faulted twice more to open his next service game.

“I mean, this is the thing I was working on for the past six months,” Zverev said. “In the important moments, I think it went again.”

But Murray still had to produce some brilliance on the move. He sprinted across the court to run down a slicing backhand volley and hit a forehand passing shot down the line for a winner to get to match point. He converted it with a clean backhand return winner down the line off a second serve.

Court coverage was one of the pillars of Murray’s physical game in his prime. Although Jim Courier, the former No. 1 who is now a Tennis Channel analyst, thinks Murray “doesn’t get into the corners with the same speed he has in the past,” the difference was hard to discern on Monday.

“I was very surprised with how he was moving,” said Zverev, who repeatedly tested Murray’s mobility with drop shots. “He’s moving quite fine, quite normal.”

But while Murray’s groans as he gave chase were more audible than usual in the absence of spectators, sprinting the length of the court was back to being a pleasure after all the pain.

“I was happy with how I played,” he said. “It was really good at points, and it wasn’t so good. But I guess I should probably be expecting that a little bit, because of the lack of matches, especially against higher-level opposition.”

Murray, ranked 134th, came back last year and won the European Open in October in Antwerp, Belgium, but has not played a tour event since November. He was out with a pelvic injury in early 2020 when Zverev was reaching the semifinals of the Australian Open in January.

Murray is now 2-0 in 2020 after defeating Frances Tiafoe of the United States in another three-setter in the first round. Next up in the round of 16: a rematch of the match that gave Murray a second Wimbledon singles title.

It came against the big-serving Milos Raonic in the final in 2016, and Raonic will be across the net Tuesday on a hardcourt instead of on grass, and with empty seats instead of a full house.

It is an odd setting, one that so far seems to give an edge to the underdog. Dominic Thiem, the No. 2 men’s seed, was overwhelmed, 6-2, 6-1, by the unseeded Filip Krajinovic on Monday in Thiem’s first match back on the tour.

The top two seeds in the women’s event — Karolina Pliskova and Sofia Kenin — are already out, and the No. 3 seed, Serena Williams, came within two points of defeat on three occasions against the 72nd-ranked Arantxa Rus on Monday before salvaging a 7-6 (6), 3-6, 7-6 (0) victory.

“There’s going to be a lot of scratchy matches in the first few tournaments,” said Zverev, whose next singles match will be in the United States Open, which begins on Aug. 31.

Murray, still an underdog for now, gets to keep on playing and preparing.

“I’m going to text him and see how the hip feels,” Su said on Monday night. “So curious.”