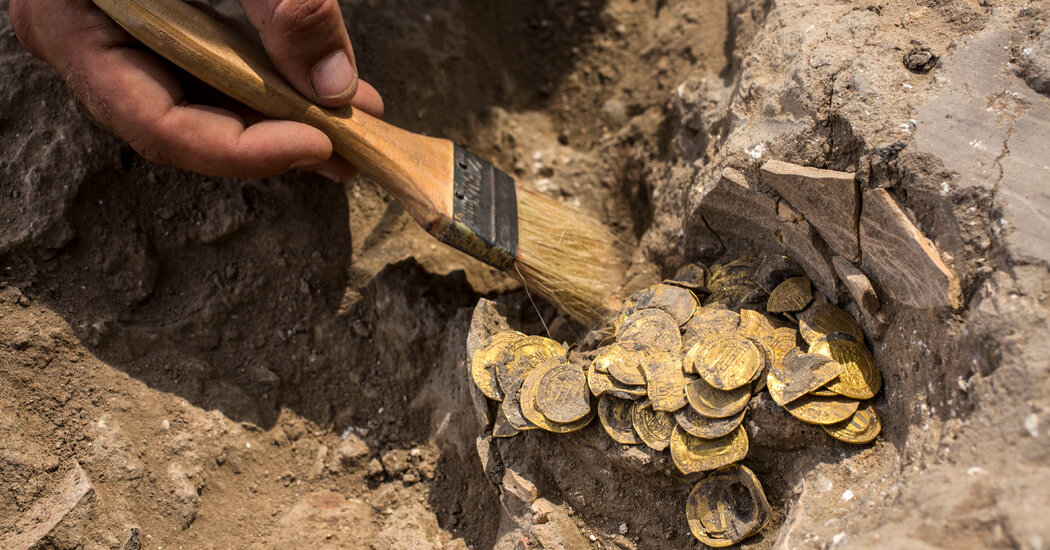 The treasure needed to be secured. So the hoard of 425 gold coins was stowed in a clay jar, its lid secured with a nail, and stashed in the sands of what is now central Israel.

It then sat undisturbed for more than 1,100 years, until last week, when two 18-year-olds taking part in an archaeological excavation by a hillside in Yavneh noticed something unusual.

“I dug in the ground and, when I excavated the soil, saw what looked like very thin leaves,” said Oz Cohen, one of the teenagers. “When I looked again, I saw these were gold coins. It was really exciting to find such a special and ancient treasure.”

The teenagers were volunteers in a vast project linked to the construction of a community in Yavneh, south of Tel Aviv. The program offers the promise of connecting young people with history, and, while it is meant to be culturally rewarding, it is not often that someone strikes gold — literally.

In fact, Robert Kool, a coin expert at the Israel Antiquities Authority, said the find was a “rare treasure” that could help archaeologists gain a deeper understanding of what was happening in the region at the time.

The coins, which weigh less than two pounds and are made of pure gold, date to the ninth century, when the Abbasid Caliphate ruled a vast empire stretching from Persia in the east to North Africa in the west.

“The hoard consists of full gold dinars, but also — what is unusual — contains about 270 small gold cuttings, pieces of gold dinars cut to serve as small change,” Mr. Kool said in a statement.

The cutting of gold and silver coins was a regular feature of the monetary system in Islamic countries after the 850s with the sudden disappearance of bronze and copper coins, he said.

One of the cuttings unearthed last week, which Mr. Kool said had never before been found in excavations in Israel, included a fragment of a gold solidus coin of the Byzantine emperor Theophilos, who ruled from 829 to 842.

Its appearance in an Islamic coin hoard offers proof of the continuous connections between the two rival empires during this period, scholars say.

Whether it was through war or trade, money kept flowing.

Mr. Kool said in a telephone interview that the era was one of the least understood in Israel and that any clue was useful. But coins are especially telling.

“You can read the name of the caliph in Baghdad,” he said about coins from the time. “The name of the governor who rules in his name in Egypt is often included.”

There may also be names of other sub-rulers, the mint where the coin was produced and, most important, the date of production.

Liat Nadav-Ziv and Elie Haddad, archaeologists at the Israel Antiquities Authority, which is in charge of the sprawling excavation site, said in a statement that the finding might “indicate that international trade took place between the area’s residents and remote areas.”

They also said it was clear that the money had been hidden on purpose.

“The person who buried this treasure 1,100 years ago must have expected to retrieve it, and even secured the vessel with a nail so that it would not move,” the statement added. “We can only guess what prevented him from returning to collect this treasure.”

It would have been worth a small fortune at the time, Mr. Kool said.

“For instance,” he said, “a person could buy a luxurious house in one of the best neighborhoods in Fustat, the enormous wealthy capital of Egypt in those days.”