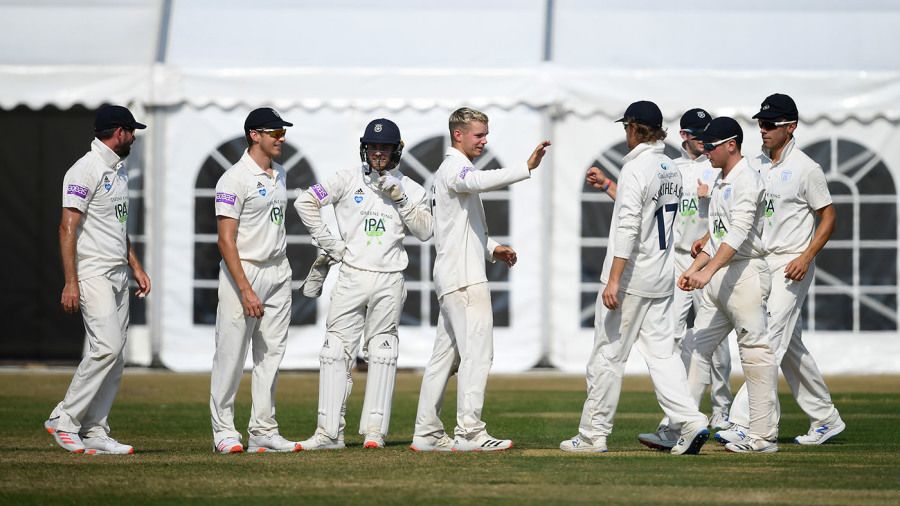 Felix Organ stepped into the breach to bowl injury-hit Hampshire into a winning position with a four-wicket haul against Middlesex at Radlett.

Organ was called on to send down 13 overs of offbreaks during Middlesex’s second innings after a second freak injury in as many days, to seamer Ryan Stevenson, deprived the visitors of two frontline bowlers. But the 21-year-old responded with figures of 4 for 42 – his second-best return in red-ball cricket – as the home side were dismissed for 201 to leave Hampshire chasing a victory target of 158.

Although they lost two wickets – and will probably have just nine fit batsmen – Sam Northeast’s side advanced to 60 for 2 at stumps and go into the final day as clear favourites to clinch their first victory in the Bob Willis Trophy.

The visitors had resumed their first innings in the morning with a 27-run advantage – which they extended by another 17 before Tim Murtagh claimed the last two wickets inside the first half-hour.

Middlesex quickly wiped out their 44-run deficit, with Max Holden playing some attacking shots before Keith Barker had him caught behind. But play was held up soon afterwards when Stevenson, chasing Sam Robson’s leg-side drive to the boundary, skidded into a pitchside marquee and gashed his shin on one of the supporting poles.

Even without both Stevenson and spinner Liam Dawson – who had sustained an Achilles tendon injury while batting the previous day – Hampshire’s remaining bowlers were able to peg their hosts back.

Ian Holland picked up the wicket of Robson just before lunch, but Nick Gubbins and Middlesex captain Stephen Eskinazi threatened to seize control of the game as they put together a partnership of 54. Gubbins was progressing nicely, with 46 from 65 deliveries, until he was given out leg before to former team-mate James Fuller – although it appeared the ball might have taken the left-hander’s inside edge before hitting the pad.

However, his dismissal prompted a clatter of wickets, with Eskinazi top-edging a sweep into the hands of deep square leg in Organ’s next over and Martin Andersson neatly yorked by Fuller.

A blinding catch at cover by substitute Brad Wheal removed Nathan Sowter to reward Holland for his tidy spell, while Organ also trapped John Simpson lbw for 23 before returning to take two more wickets post-tea. Murtagh registered a couple of boundaries off Barker to lift the Middlesex total above 200 before edging the left-armer to second slip, leaving Hampshire to face 26 overs ahead of stumps.

Organ and Joe Weatherley – who top scored with 98 in Hampshire’s first innings – made steady progress until James Harris produced the breakthrough in his first over, tempting Organ to prod at an outswinger.

Left-arm spinner Thilan Wallalawita matched that feat by having Tom Alsop, who had just survived a sharp chance to short leg, caught at first slip with his fifth delivery to leave Hampshire 48 for 2. But Weatherley and Northeast batted sensibly until the close, bringing the target down to just 98 going into day four.