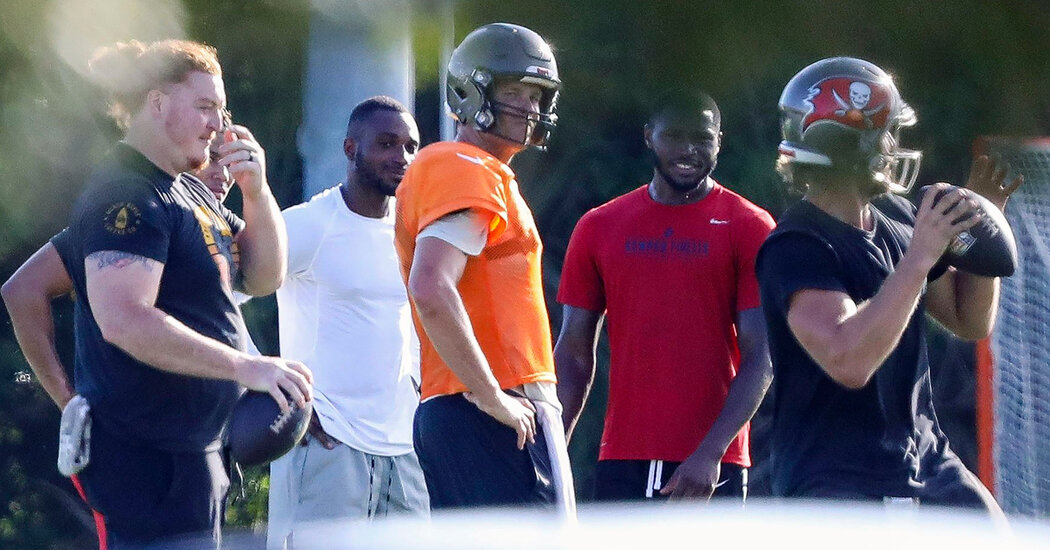 N.F.L., you’re on the clock. Now that nearly every major North American sports league has resumed some form of play, it’s the N.F.L.’s turn to see if it can navigate the coronavirus pandemic as red flags arise at every turn.

The loudest alarm went off Monday, when Major League Baseball, its new season less than a week old, was forced to postpone several games because of an outbreak among the Miami Marlins. The fallout continued on Tuesday, when the Washington Nationals players voted against traveling to Miami to play this weekend, and the league postponed all of the Marlins’ games through Sunday. The Marlins now have 17 confirmed positive cases, including 15 players, within their traveling party.

The Marlins’ infections and M.L.B.’s subsequent schedule shuffle were swift and scary reminders that as Dr. Anthony Fauci, the country’s top infectious disease doctor told The New York Times in April, “the virus decides how quickly you’re going to get back to normal.”

Because the N.F.L. season ended just before the pandemic hit the United States, the league was able to keep to its off-season calendar, albeit mostly online. For months, the team owners and players’ union approved plans to reduce the risk of infection by, among other things, reconfiguring locker rooms, reducing travel schedules, eliminating preseason games, and implementing extensive testing of all employees.

But unlike the N.B.A., W.N.B.A., Major League Soccer and other leagues that created enclosed communities to isolate their players and staff, the N.F.L. followed the lead set by Major League Baseball and the PGA and chose to let players and staff return to their homes after play, vastly increasing their risk of exposure. Now, N.F.L. players are reporting to training camp with one eye warily watching the uncertainty enveloping M.L.B. and across the rest of the country as Covid-19 cases surge in certain regions.

“I’m not confident in the entire system because it is so contagious,” Austin Ekeler, a Los Angeles Chargers running back, told TMZ Sports. “There’s a reason we’re going through all these shutdowns and things like that. There’s not been really any progress made as far as containing this thing.”

The reasons for going without a so-called bubble are myriad. N.F.L. rosters are far larger than those in other leagues so zones that players would be restricted to would have to be enormous. Players resisted being cooped up in hotels for months before the league and union made the decision in the spring to go without a single-site locale to host the regular season. DeMaurice Smith, the executive president of the players’ union, added another factor: The league and union made their decision when cases were declining, not rising.

As one agent put it: “The league gambled on the calendar and Covid ‘progress’ falling in their favor. They are losing the gamble.”

So now the league and the N.F.L. Players Association are banking on extensive testing and an honor code to keep their season running. On Sunday, the union sent players a memo reminding them that teams can penalize players who are caught in an indoor nightclub, a bar, a house party or other gatherings with more than 15 people. Never mind that the sport itself requires hand-to-hand contact or that the league is only recommending, but not requiring, players to wear face coverings.

“This is just the beginning,” said Dr. Scott Braunstein, the medical director of Sollis Health-LA who was a sideline doctor for the Los Angeles Rams for four seasons until this year. “If they go on without mandating masks and the testing protocol does not change dramatically, this is going to spread like wildfire through the teams.”

It may be too late for the N.F.L. to heed many of the lessons that M.L.B. is learning. Dr. Allen Sills, the N.F.L.’s chief medical officer, told reporters on Monday that there are no plans for an enclosed community like the N.B.A. has built. The league, he said, will instead rely on a “virtual football bubble.” In a letter to fans on Monday, Commissioner Roger Goodell said that Covid-19 will present “a major challenge” this season and “adjustments are necessary to reduce the risk for everyone involved.”

The commissioner has said he will consult with the league’s competition committee to determine what, if any, thresholds must be met to shut down a team hit with a wave of infections, or cancel or postpone games.

The risks are only now being tallied. During the off-season, 95 players and staff tested positive for the coronavirus. On Tuesday, the league said that eight more players were added to the injured reserve list because of positive tests for the virus in addition to the two dozen that were put on the list on Sunday and Monday.

“As I sit here in quarantine, it is clear this virus does not discriminate,” Sugarman said in a statement. “It should continue to be taken seriously.”

A growing list of players have also chosen to sit out the season, including Kansas City Chiefs guard Laurent Duvernay-Tardif, Dallas Cowboys cornerback Maurice Canady, and several New England Patriots players, including linebacker Dont’a Hightower. Philadelphia Eagles wide receiver Marquise Goodwin said on Twitter that he opted out this season because he did not want to increase the risk that his wife might lose another child after they’d lost three to childbirth complications before the birth of their daughter in February. “I won’t take the chance of experiencing another loss because of my selfish decision making.”

Per the terms of the agreement reached between the league and the union last week, players who opt out will receive a stipend of $150,000 as an advance on the salary they would have earned this season.

Caleb Brantley, a defensive tackle with the Washington Football Team, is one of a handful of players who opted out because he has one of the 15 medical conditions that the league has deemed “high risk.” He and others who qualify will receive a $350,000 stipend, but it won’t be treated as a salary advance.

With thousands of players crisscrossing the country to report to training camp this week, the list of positive tests is bound to grow. And as the infections ricochet through M.L.B., more N.F.L. players are bound to decide to sit out the season to better protect themselves and their families.

This is going to test the N.F.L. like never before. Players and coaches abide by the mercenary’s ethic of “next man up”: When one player goes down with an ankle sprain, torn knee ligaments or a concussion, the next man must be ready to take his place. We’re about to find out what happens when the injury is not a bruise or broken bone, but an invisible virus.

“It’s at least going to get started,” Eagles center Jason Kelce said. “How it goes after that probably depends on how well we keep the virus from contaminating the whole building, how other teams do.”