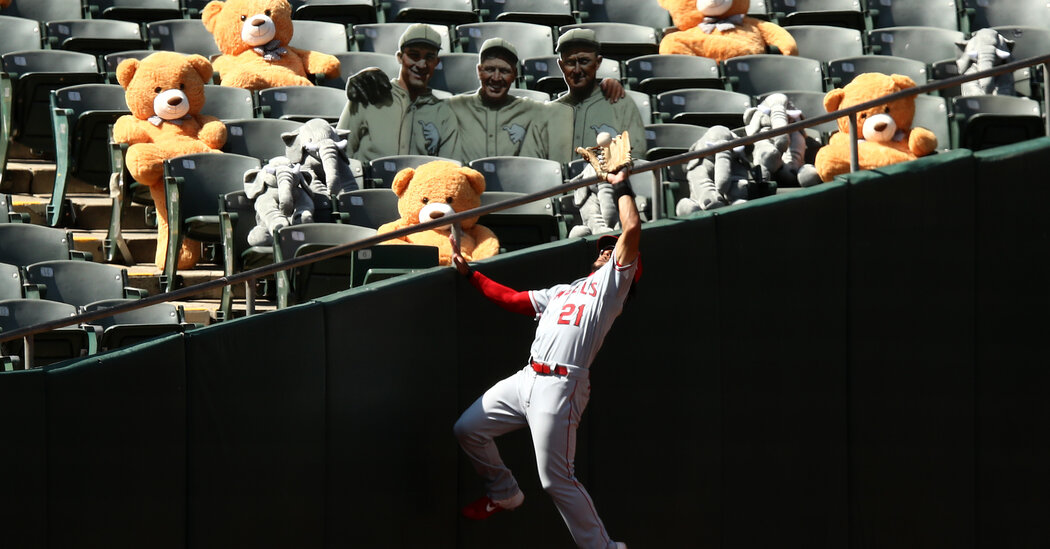 I sent a text to my high school English teacher the other day. He loves baseball, so I knew he would appreciate a photo of the Mets-Braves game at Citi Field, from my seat in the press box. He replied that he hadn’t expected to care much about a 60-game season, and yet there he was, on his couch, riveted to every pitch. Then he watched another game that night.

We might not deserve baseball’s return. We have not slowed the spread of the raging coronavirus, so the ballpark gates remain closed to fans.

Yet Major League Baseball is beaming all 30 teams into our televisions, from ballparks all over the country, and what a joy it is to watch. For months, we clung to live games from South Korea or replays from the past. But the old song is true: Ain’t nothing like the real thing, baby.

At home on Saturday, I gorged on the game. From Yu Darvish’s first pitch in Chicago to Kirby Yates’s last pitch in San Diego, I spent over 11 hours peeking in at all 15 games in the majors. Heaven is a Fire TV Stick.

Here are some snapshots from an opening weekend feast, after nine long months in the baseball desert.

Wrigley Field, Chicago, second inning: The Brewers’ Lorenzo Cain is caught in a rundown between second and third after a sharp grounder by Ben Gamel. The Cubs make three throws but can’t catch him, and then Cain points excitedly at first base: Nobody’s covering! Safe all around, and soon the bespectacled Eric Sogard drives Cain home with a single. The announcers mention that Sogard’s nickname is Nerd Power.

Fenway Park, Boston, third inning: J.D. Martinez comes to bat for the Red Sox, who are down early to the Orioles. Martinez has a habit of brushing his thumb against his nose before every pitch, which I can’t un-see. He does it again, of course, and from the side, you can see a giant canopy that serves as an auxiliary dugout for social distancing. The play-by-play man, Dave O’Brien, recalls that the park in Vero Beach, Fla., where the Dodgers used to train, had no dugouts, which leads to a charming story about Vin Scully. (Yes, all stories about Scully are charming.)

Tropicana Field, St. Petersburg, Fla., third inning: The Rays’ Ryan Yarbrough is pitching against Toronto, and a graphic on the broadcast shows that all of his pitches have ranged from 70 to 89 miles per hour. This makes Yarbrough distinctive in an age of power, and the broadcasters call him a modern version of a knuckleballer, capable of disrupting a hitter’s timing for days. There are no true knuckleballers in the majors in 2020, which really bums me out.

Guaranteed Rate Field, Chicago, fifth inning: Steve Cishek is pitching for the White Sox, and his sidewinding delivery is typically mesmerizing. Here he faces the Twins’ Nelson Cruz with two men on, and I wonder if Cruz — nickname: Boomstick — will hit the first home run of his 40s. He does, but the White Sox will go deep five times in an easy win.

Busch Stadium, St. Louis, fifth inning: I don’t know how Paul Goldschmidt, the Cardinals’ slugger, hits the way he does. Goldschmidt starts with his hands above his head and his bat on an exaggerated downward angle, as if he needs to scratch an itch on his lower back. He’s always ready for the pitch, of course, but while he homered earlier off the Pirates’ Trevor Williams, he grounds out here.

Citizens Bank Park, Philadelphia, second inning: Miami’s Caleb Smith is struggling with his control, walking three in the inning after a leadoff homer by Didi Gregorius, the Phillies’ masked shortstop. Smith is wearing the Marlins’ preferred jersey, which is black with black script, making it close to impossible to read the team name. You know what is perfectly visible? The white Nike swoosh, now standard on all jersey fronts. Sigh.

Globe Life Field, Arlington, Texas, sixth inning: Cardboard versions of President George W. Bush, his wife, Laura, and the Hall of Famer Ivan Rodriguez sit together at field level, just to the first-base side of home plate at the Rangers’ new ballpark. The Rockies’ Daniel Bard is not distracted — by the cutouts or his own thoughts. Bard, pitching in the majors for the first time in seven years after a mental block from throwing strikes, works out of a jam and earns the victory. Twenty of his 25 pitches are strikes.

Dodger Stadium, Los Angeles, second inning: The Dodgers’ Mookie Betts comes up with the bases loaded and flies out to Giants center fielder Mike Yastrzemski. The pitcher is Logan Webb, but the Dodgers did not know he was starting until Saturday morning. Gabe Kapler, the Giants’ new manager, has been delaying the announcement of his pitcher and lineup, presumably to gain an edge by giving the opponent less time to prepare. “It’s a little bit of gamesmanship, we’ll call it,” Dodgers Manager Dave Roberts told reporters, icily. “To each his own.”

Minute Maid Park, Houston, sixth inning: It’s nice to see the Astros’ Lance McCullers back on the mound. He always keeps you guessing — he has a terrific curveball and changeup, and few starters throw fastballs so infrequently. He has been out for 21 months because of Tommy John surgery and the pandemic, and while he gives up a homer to the Mariners rookie Kyle Lewis — who also homered in the opener — McCullers looks sharp in a 7-2 win.

Oakland Coliseum, Oakland, seventh inning: The A’s are losing to the Angels, but the rookie left-hander Jesus Luzardo, who tested positive for the coronavirus during training camp, looks impressive for three scoreless innings. Also impressive: the Athletics’ idea to ask bleacher fans for some of the signs they would normally carry to the ballpark. The usual array of bedsheets and flags is a welcome sight along the railings above the outfield.

Progressive Field, Cleveland, fifth inning: The Royals’ Brady Singer, a highly touted right-hander, finishes his strong major league debut with his seventh strikeout, zipping a fastball past Cleveland’s Jose Ramirez. The Royals promoted Singer without manipulating his service time, another sign of their trust in traditional methods. They show their trust again in the 10th inning, which now starts with a runner on second to speed games along. A bunt moves the runner to third, a sacrifice fly scores him, and the Indians are left to grouse about the new rule. Pitcher Mike Clevinger tweets that it is the wackiest thing he has ever seen, adding: “do you have any idea how hard it is to get a runner to second off the back end of a bullpen?! #ThisIsntTravelBall #MakeThemEarnIt”

Great American Ballpark, Cincinnati, seventh inning: Someone with “B. Garcia” on his back is pitching for the Tigers against the Reds. His first name is Bryan, and I’m not familiar with him, nor with the other Garcia on the team, Rony, also a right-handed pitcher. In my defense, there were 150 more players on 2020 opening day rosters than there were in 2019, when teams carried 25 players each. Now they carry 30.

Citi Field, New York, 10th inning: The new extra-innings rule comes to Flushing, after Edwin Diaz blows the save with two outs and two strikes in the ninth. Adam Duvall starts on second base for Atlanta, and Dansby Swanson smacks Hunter Strickland’s first pitch to center field to give the Braves the lead. They score twice more off Strickland, who ends his Mets debut with a 54.00 E.R.A. that could have been worse: Duvall’s run, at least, is officially unearned.

Nationals Park, Washington, fourth inning: The Yankees lose badly to the Nationals, but have the game’s must-see highlight when Giancarlo Stanton obliterates a belt-high fastball to the distant reaches of the left-field bleachers. Statcast measures the distance at 483 feet, the second rocket Stanton has launched in two games. It is a not-too-subtle reminder that while Stanton hardly played last year, he remains the most fearsome slugger on the planet.

Petco Park, San Diego, fourth inning: The Padres’ Edward Olivares doubles to the left-field corner off Arizona’s Robbie Ray for his first major league hit. Olivares, a 24-year-old center fielder from Venezuela, claps his hands over his head as the souvenir rolls toward the Padres’ dugout. The veteran Manny Machado scoops it up and then tosses a decoy ball into the stands, a time-honored gag on the rookie. “Never gets old,” says Don Orsillo, the Padres’ broadcaster.

Five innings later, Yates locks down the game on a Kole Calhoun grounder to first at 12:30 a.m. in the East. Major League Baseball closes up shop for the night, but the 30 teams will do it all again on Sunday — 15 more games, infinite little treasures.