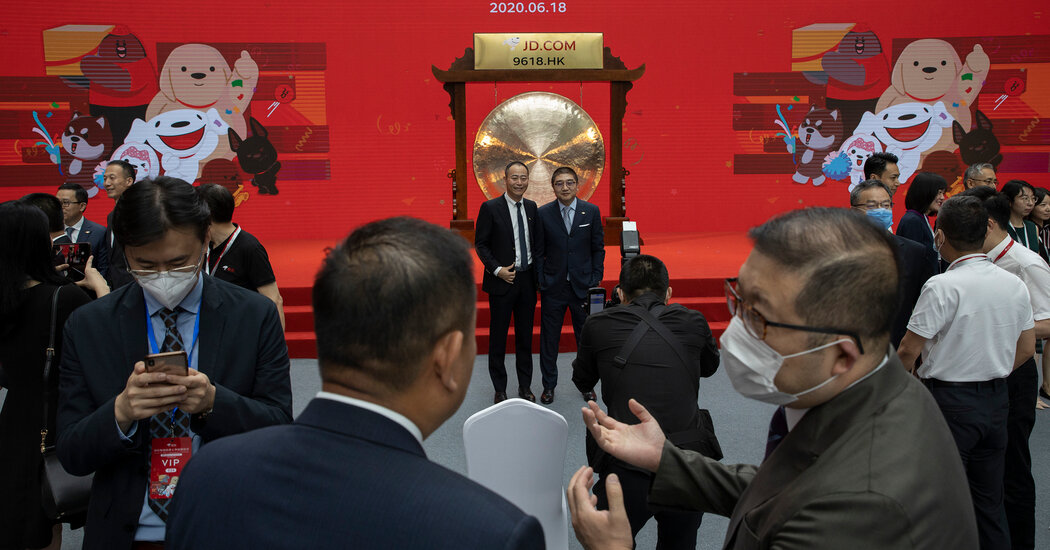 HONG KONG — When Beijing signaled this month that it was time to buy China, investors did not hesitate. But it did not take long for some to get cold feet as officials warned that the market was overheating.

In the first four days of trading in July, investors from outside China poured a record $7.6 billion into the market, according to BNP Paribas, the French investment bank. The official warnings that followed prompted outflows of $2.5 billion in a single day a week later.

It is both the hope and the uncertainty of the Chinese stock market that is driving erratic behavior, as fresh highs bring concerns anew.

In a global economy troubled by the coronavirus pandemic, China’s recovery has offered a glimmer of growth. Chinese stocks rose by nearly a trillion dollars in the span of a few short weeks, shocking even the most sanguine of financiers.

Along with the foreign money pouring in, a big piece of the momentum, as in many Chinese rallies, is fueled by ordinary investors who have few options to build their savings except for property and stocks. There are more than 160 million trading accounts in China, and the majority are held by retail investors who make less than $700 a month, according to a state media survey.

“It’s just like gambling,” said Wu Hao, a small-time investor from Beijing who rode another remarkable rally in Chinese stocks, in 2015. Mr. Wu’s investment more than tripled. “Brave people can make money,” he said. But when the market crashed, he lost $2,800.

Now small fry like Mr. Wu and foreign whales with billions of dollars alike are watching the same elements of delirium in the market and wondering: Have we seen this movie before?

Some investors have indeed reversed course, acknowledging the realities of investing in a country whose government has the power to inflate and deflate stocks at will. The market has been punctuated by huge swells one day, as state media talk up a bull run, and sudden plunges the next, as officials warn of irrational exuberance.

Yet even with the ups and downs of recent weeks, China’s stock market is still worth a quarter more than it was a year ago, bringing tremendous wealth to investors. The collective value is hovering around a $10 trillion marker. That was how much it was worth in June 2015, right before a crash that prompted hasty reactions from China’s regulators and set in motion a global sell-off.

There are reasons to think this is a repeat of 2015. For starters, countless people are once again opening trading accounts. Mr. Wu’s family and friends talk about the stock market and trade tips often. His father-in-law started investing for the first time and his mood swings now mirror the market’s fluctuations.

“When the market is up, he looks happy, but when it falls, he sighs all the time,” Mr. Wu said.

Optimism is inflated just as easily as it is dashed by the authorities, who can pick winners and losers, as they did five years ago. At the start of July, the government indicated that investors could not lose if they made a bet on China. State-controlled media, closely trusted in China’s heavily censored news landscape, jumped in to cheer on investors.

“Hahahahahaha! The signs of a bull market are more and more clear,” one state-owned financial publication wrote in online commentary. Xinhua, China’s official newswire, reported that investors were “running” toward stocks. Another described the rally as a healthy bull run, noting that investors could experience “the wealth effect” of climbing stock prices.

Small-time investors across China took the encouragement to heart.

Online finance forums filled up with recent university graduates trading tips and discussing what company stocks to buy. One television channel focused on the economy, CCTV-2, posted a message on its social media account asking, “Is the bull market really here?” A commentator wrote, “bull bull bull.” Another wrote, “Let’s go for it!” A third said, “If you are unwilling to take the risk, you can never make lots of money.”

The momentum this time began during the Covid-19 outbreak in February. Restaurant and store owners were forced to shut down their businesses. Factory workers were told not to come back to work. In those early weeks of the outbreak, as people sat at home under citywide lockdowns, a surge of new stock trading accounts were opened, according to state media reports.

As people emerged from lockdowns, stock brokerages became so crowded that they looked more like China’s bustling wet markets, one local outlet reported.

Tens of thousands of new accounts have been opened for margin finance, which allows people to borrow money to invest in stocks. Mom-and-pop investors took on an alarming amount of debt to buy stocks in 2015, contributing to the crash. In recent weeks, levels of margin financing have jumped, raising concerns once again.

But there are important differences to 2015, too. Regulators at the time allowed state media to fuel a rally for months before taking any measures. This year, a week after the market took off in July, the securities regulator identified over 200 online platforms that were offering margin financing illegally.

Officials also did little to dampen enthusiasm five years ago. When the sell-off began, they intervened repeatedly to try to prop prices up. They restricted bets against stocks, the police were dispatched to raid the offices of investors, senior executives at investment banks were arrested and a business journalist was detained and forced to apologize publicly.

Officials appear to be exercising more restraint in their signaling this time around. Just a few days after cheering on investors, financial state media ran an editorial that warned them about the stock market getting overheated, pointing to 2015 as a warning. Officials have made similar warnings in public in recent days.

But not everyone is heading to the exits — many are buoyed by China’s resilience. While several other global economies are struggling with the coronavirus, China last week reported that its economy grew by 3.2 percent over the past three months.

“China is a tremendous driver of growth,” said Louis Kuijs, the head of Asia economics at Oxford Economics. Without China’s positive contribution, the global economy would have shrunk by 10.5 percent over the past three months. Instead it will likely only recede by 5.9 percent, according to his estimate.

The economic landscape, while dire, is quite different from five years ago, a period of weak economic growth for both for China and the world.

“In 2015 it was really hard to explain why the market would go haywire,” Mr. Kuijs said.

“It was an odd setting for a stock market bull run.”