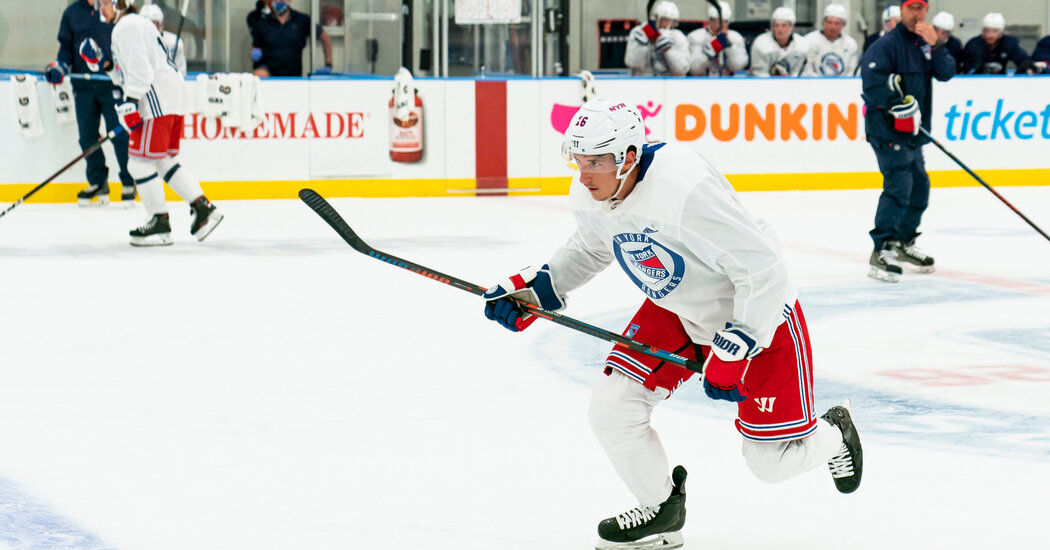 The pandemic has forced the N.H.L. to finish its season at two hubs in Canada, Edmonton and Toronto.

For the Rangers, spending a long period in Canada will be a return of sorts to the late 1960s when the team regularly headed there to train, holding camp in Kitchener, Ontario, an hour from Toronto.

Back then, the team and the league were much more Canadian. Everyone on the Rangers was Canadian — in fact, there were years in the 1960s when everyone in the league was, too.

Competition was fierce. Only 18 players made the club: 16 “skaters” and two goalies. Now, a team may have as many as 23 players on the roster, and must carry at least 20. There were only six teams in the league, compared to 31 now — so fewer than 120 players from all of Canada could call themselves big-leaguers.

The Rangers practiced at the Kitchener Memorial Auditorium, a 5,000-seat bandbox shaped like a cockfighting amphitheater. On their return to Canada this month, they will be staying in Toronto and training at local rinks but not the Maple Leafs’ Scotiabank Arena.

In Kitchener, they stayed at the local Holiday Inn, two to a room. But the players were comfortable there. They enjoyed dinners at the Pig’s Tail. They had come from places like Kapuskasing, or Moose Jaw, playing on junior clubs in arenas like the one in Kitchener. In fact, Ontario still has dozens of these rinks. When the Rangers practiced, old guys showed up wearing the hockey jackets of their youth — with the names “Krauts” or “Tigers” stitched on the back.

Hockey is not just Canada’s sport — it is its passion.

When the millennium was looming more than 20 years ago, the Dominion Institute polled Canadians on what they considered the most important event in their history. First came Confederation — and sixth was Canada’s involvement in World War II. Fifth? It was the defeat on the ice of the Soviet Union in the 1972 so-called “Summit Series.”

As I reflect on those camps in Kitchener, I think how it molded these young men into a team. After all, there is nothing natural about being a New Yorker. Just because they trade you there, or the team signs you, that doesn’t mean you have to love the place.

In fact, when Bob Nevin was traded to the Rangers from Toronto, he thought “it was the worst thing that ever happened to me.” Nevin adapted. A two-way right wing, he went on to a solid career, and became the team’s captain — and one of the few players who actually had an apartment in Manhattan.

But when players entered the arena in Kitchener, there was on one end a 15-foot portrait of Queen Elizabeth. On the other was a sign: “Bingo Friday nights.” Just like home.

The 2020 Rangers come from Canada, all right, as well as Boxford, Mass., Cherepovets in Russia, and, of course, Huddinge, Sweden.

I suspect that living in a hockey-mad country, even for a short time, will affect these 2020 Rangers in ways that practicing in Westchester cannot.

Where hockey players in New York would be happy has always been problematic.

Francis — born in North Battleford, Saskatchewan — wanted them out of New York City, with its temptations, during the regular season. He liked the quiet Long Island town of Long Beach, N.Y., not only as a place to live, but as a place to train. It is a seaside resort, with plenty of available housing once summer ended. In 1975, he ended the Rangers’ training in Canada and brought them to Long Beach, where most of the players lived during the season.

But when the Garden was taken over by the Broadway and Hollywood agent David A. (Sonny) Werblin, that changed dramatically. Werblin had been Elizabeth Taylor’s agent, for example. He was a guy who valued stardom. When Werblin was president of the Jets, he was obsessed with Joe Namath’s image — in fact, he helped nurture it.

“I want my guys living in New York,” Werblin said, upon taking charge of the Garden. “I want the hockey players mingling with the fans. I want them to be seen.”

He pulled them out of Long Beach and encouraged them to move to the city. In 1978, he got a training facility in Rye, N.Y., in Westchester County, where they continue to train. Many players moved to Manhattan, or Westchester.

And now, for the time being, they’re going to be ensconced in Canada. Of course, they’ll still be the New York Rangers. And for many of them, Canada will be the unfamiliar country. How will these New Yorkers do up there?